Double Time: A Q&A with Gallerists in both Feature Art Fair and Art Toronto

Art-fair fever hits Toronto this week with the 15th edition of Art Toronto and debut of the Feature Art Fair. Three dealers reveal how to make the most of both worlds. 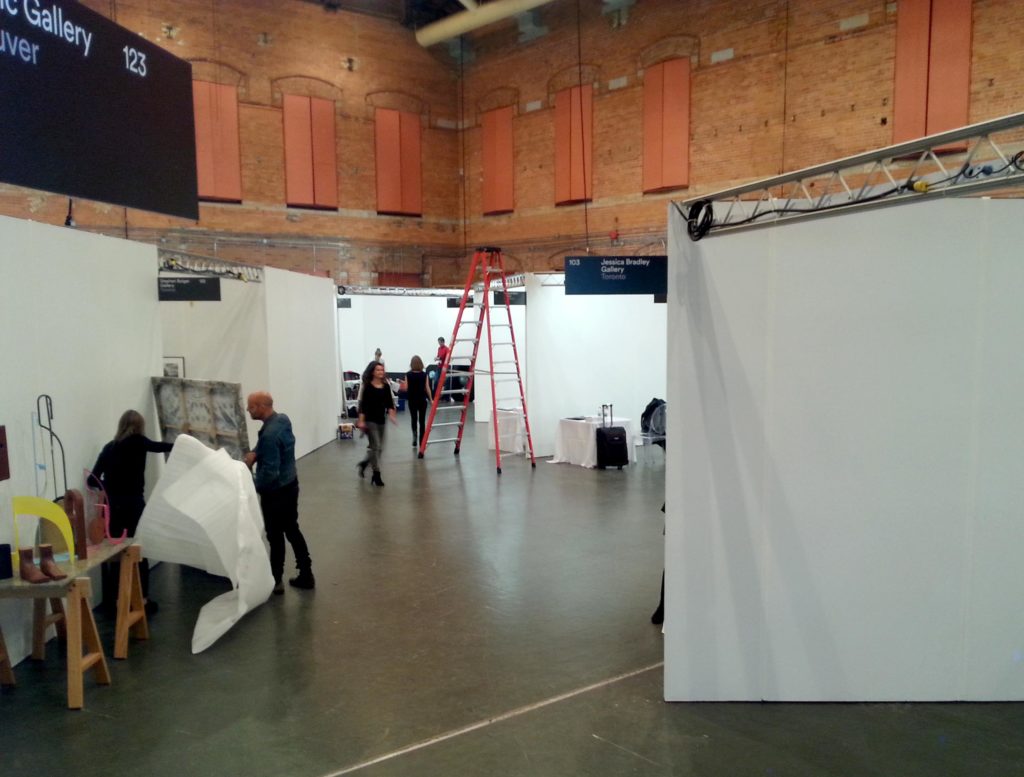 View of the Imperial Oil Opera Theatre at the Joey and Toby Tanenbaum Opera Centre during set-up for the 2014 Feature Art Fair. Courtesy the Association des galeries d'art contemporain.

While some may interpret the presence of Feature as a bit of a gauntlet throw—in the usually quiet and relatively small Canadian contemporary-art market—others have seen it as a sign of said market’s health, even growth. Of the dozens of dealers of Canadian art in Toronto this weekend, four have chosen to have booths at both fairs. David Balzer spoke to three of these gallerists (the fourth, Georgia Scherman, was unavailable for comment) about the implications, challenges and benefits of doubling up.

I had done Papier and [AGAC] approached me [about Feature] and I said sure. I started to realize I could only show three contemporary artists at Feature, and our program is fairly mixed in terms of historical and contemporary. And then I had misgivings, because I thought that doesn’t normally represent my gallery the way I’d like to in an exhibition. So then I thought I could do both, and show historical work at Art Toronto and all contemporary at Feature.

That seems like a pretty expensive way to diversify.

There’s a joke: the fastest way to make a million dollars is to start with two million then open a gallery, so I guess this follows right along with that. Art fairs are expensive. They’re costly for people to produce and promote and it’s the exhibitors who pay for that. It’s become an occupational hazard just having to do fairs. Although it seems silly to do even one fair in the city where your gallery is located, the truth of the matter is that there are a lot of people in Toronto who will only make purchases at Art Toronto.

I think what Feature’s doing, by having a very small and select exhibition, makes sense, and it’s a formula that’s worked for us in shows we’ve done in Los Angeles and Pittsburgh as well as in Montreal with Papier. Small-scale shows where there aren’t a lot of booths are fairly low-stress to do. To me it seems more like I’m doing a fair-and-a-half rather than doing two fairs. I’m lucky that I have a staff who can help me with this. Last year we were more stressed in that we did art fairs in New York and California in the same weekend. So to me this doesn’t seem like that big of a deal. At least they’re in the same city. We can divide and conquer.

Do you think everyone who goes to Feature will also go to Art Toronto or do you think there are people who will only go to Feature this year?

My sense is that there are a lot of people who have stopped going to Art Toronto because they feel that they already know everything they’re going to see, and they go to fairs in other cities, and it’s a busy time of year, etc. A lot of serious collectors have taken a bit of a pass on Art Toronto. I think they’ll be curious and want to go to Feature and if anything that will drive more traffic to Art Toronto, because Art Toronto is still a very good and strong fair, so people should be interested to see what’s at both. They’re just down the street from each other, and I think they’ll both feed off each other. Having a couple of fairs should be good for both shows. I don’t think it’s something to fear.

What is your opinion on the market for historical work versus that for contemporary art in Canada?

I find them both to be very strong, but divergent audiences. There are a lot of people who do nothing but collect contemporary Canadian art, and that has grown by leaps and bounds, in terms of the number of galleries on the scene now who are showing contemporary Canadian works as well as the people who are buying it, whether it’s for public or private collections. Historical: you just have to go to a Heffel auction to see how well historical Canadian paintings are doing. For me, I’ve been doing a lot of work the last 15 years building up a large inventory of historical Canadian photographs that I think are really overlooked, much the way photographs themselves were overlooked more than 20 years ago. I hope people will make the connection and see these as historical Canadian art rather than just photographs.

The moment I heard about it. It depends on how many artists you have in your gallery and your perspective on what you want and expect from fairs. Our gallery has many artists, and we are in Toronto but we’re also in Montreal, and we believe that art fairs are always an important moment to make people aware of all the artists we have and what they produce. If we do a small fair like Feature, because it needs to be curated, we’re in a situation where we’re pulling two to three artists, four max. By doing this you put a few other artists on the back-burner. We have a gallery in Toronto and could have presented a group show there to rectify this. But I feel that Art Toronto is a good moment to present a lot of work and teach the clientele about the quality of art that’s available. I didn’t want to lose that opportunity to display more.

Isn’t it expensive to do two fairs at once?

Feature is not expensive, and as I was saying this is an opportunity to show more work. If we were to add more space to our Art Toronto booth, it would have been more expensive by comparison. At the same time, the political part of it is, I guess, the desire to support a fair that gives a client or visitor more access to an experience, rather than a show room—which Art Toronto has become to a certain extent. I think there’s a maturity right now in Canada; we can grow the clientele interested in contemporary cutting-edge artists. I think Feature will be able to give that crowd something of quality. There are so many good reasons to have two fairs; I don’t see a problem. I even suspect Feature might be good for Art Toronto, because people who have been reticent to go to Art Toronto in recent years might want to go to Feature, and then decide to come back there. Feature is not big; many people will want to do both in the same day.

How are you planning on being at two fairs at once?

It’s a bit of a problem, actually! The gallery in Toronto is opening an Martin Bourdeau exhibition. Our Arsenal space has an opening too. And there is a Feature party at our Toronto space. Add to this that the Biennale de Montréal has just opened and many museums are coming to see our gallery…. Let’s just say we’re taking it hour by hour. But every potential person who is close to the gallery and available to help is helping us with this. It’s a problem but it’s a good problem to have.

We decided to join both fairs last April, as we saw it as an opportunity for our artists to increase their exposure. Currently we only work with nine artists; since the beginning we’ve been rigorous in our selection. Our relationship with Toronto-based collectors has taken off in the past few years and we see participating in Toronto art fairs as part of that. The gallery will also be moving into a new, bigger space in the near future, so it’s a good way to get double exposure and meet new people.

What are some of the divergent and/or similar ways you are presenting artists’ work in Feature versus Art Toronto? Why?

At Feature we are exhibiting two emerging women artists: Caroline Cloutier, mostly known as an installation artist, and Simone Rochon, a drawing and sculpture artist. The shape of the booth is quite challenging, so we thought about the concept of having both artists’ works merge together, in order to create a symbiosis. At Art Toronto we will focus on connecting the works of each artist we work with.

What is your hope for Feature as a fledgling fair and for Art Toronto as a veteran fair? What can each learn from the other?

I somehow see Feature as an edgy art fair. Canada’s art market is underrated, and Feature could become one the channels to explore and discover high-end contemporary art in Canada. Besides quality, the size of the fairs matters. Feature presents 23 galleries, where Art Toronto presents more than a hundred. Both fairs could complement each other, and I truly believe that there is a place for everyone.