Metis artist David Garneau becomes Louis Riel, and confronts statues of John A. Macdonald, in a performance debuting this week. More in this interview. 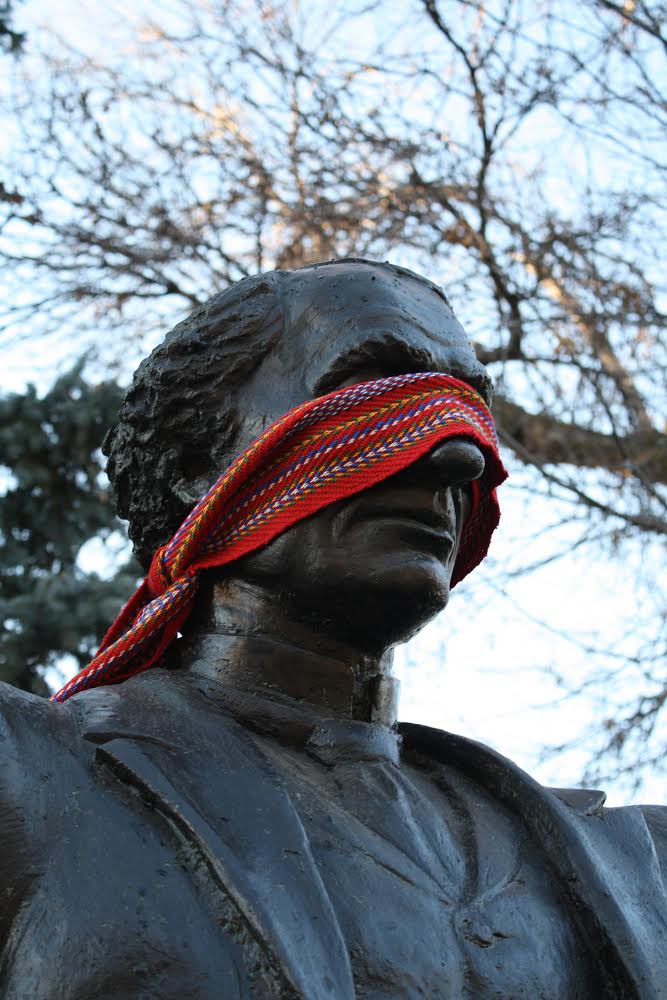 A ceinture fléchée wrapped around the head of the John A. Macdonald statue in Regina's Victoria Park, where Metis artist David Garneau will perform as Louis Riel on November 16.

A noose laid at the feet of the John A. Macdonald statue in Regina's Victoria Park. On November 16, artist David Garneau, dressed as Louis Riel, will interact with this statue of Macdonald, whose charge of high treason against Riel led to his hanging in 1885.

This Sunday, November 16, is the 129th anniversary of Louis Riel’s 1885 hanging at the North West Mounted Police barracks in Regina. This year, Metis artist David Garneau marks the day with a performance in Victoria Park, across from the Dunlop Art Gallery, which is presenting the work titled Dear John; Louis David Riel. Garneau’s performance takes place at the park’s sculpture of John A. Macdonald, who famously charged Riel with high treason, precipitating his hanging. Garneau will dress as Riel and address this sculpture, broaching, according to the Dunlop’s website, “themes of Metis aesthetics, art and activism, and the difficulty of reconciliation.” A conversation with artist and writer Dylan Miner will follow the performance at the nearby Regina Public Library. David Balzer interviewed Garneau earlier this year as he prepared for the performance, touching on ideas of legacy, conciliation and trauma.

David Balzer: I grew up in Winnipeg, so when considering your performance I immediately think of the two contentious statues of Riel that were erected in Winnipeg and Regina in the late 1960s and early 1970s. Do these inform the performance at all?

David Garneau: The outfit that I’m having made is based on the second one, the one that’s less expressionistic. It’s not directed at that piece particularly. I’m trying to draw a parallel between questions and possibilities of conciliation in the present day and the types of conciliation that Riel addressed in the 1870s.

DB: A lot of the detractors of those 1960s statues were themselves Metis. Considering Riel’s role as a cultural figure, do you think it’s even possible or desirable to monumentalize him as a public statue?

DG: I have so many thoughts on this, and have done several recent lectures on Indigenous public art and performance, particularly, but also on problems of public art generally. From an Indigenous point of view, Metis in particular, the more the better, I think. Make everything, sort it all out.

The first piece, the Regina piece commissioned for the 1967 centenary, was made at a time when the autonomy of the artist was very important. People were taught to respect the notion that what an artist does on their own is somehow tapped into something higher, better than what mere mortals could understand. Metis and Indigenous people don’t have this concept too often. There is certainly room for the shamanic/genius artist who taps into something beyond the everyday; that’s respected. But for the most part, especially with a monument that’s a public event, with committees and everything else, there’s this notion that it should be discussed and deliberated upon by the people, whom it’s supposed to represent.

What I love about Riel is that he’s such a contentious figure. Who does he represent? I’ve done Riel works in the prairies, where it’s read one way, and then in Montreal, where it’s read in an entirely different way—there, he’s a Franco-Canadian and it’s about his French aspect; [elsewhere], he’s more Indigenous. This monologue—this dialogue—with John A. is really going to embody all these aspects. There’s going to be a bit of a rant taken from his trial transcripts; there’s a pleading, moving through all these stages, these types of grief. I think all representations should be out there.

DB: Given the factionalism and radicalism of the 1960s and 1970s, it makes sense that those two statues were such flashpoints, at the time. Do you think Riel has become more or less contentious as a cultural and political figure since then?

DG: It goes up and down. The reason why he was such an interesting barometer in 1967—I mean, is that the first date that Canada came into being? I’d certainly put that date as more significant than the [start of the] First World War and its recent fetishization. Right across the country there were all sorts of Canadian construction projects. Riel was interesting in that time as a central figure, and he keeps emerging from time to time as people try to sort out his role in the construction of Canada.

That’s why I like this idea of multiple Riels. All these different versions. In Winnipeg, though, with that particular sculpture, it was much more difficult for Metis people. In 1967, we’re just emerging, and it’s not until 1982 when we’re recognized [in the constitution as Aboriginal people of Canada]. So it’s a lightening rod for Metis folks at the time and in subsequent decades to respond and be able to declare. That’s the interesting thing about art—good, bad or indifferent. When the subject is interesting, when the expression is interesting, it attracts interest.

DB: Are there any logistical problems around doing something like this? A civic fear that you’re going to stir up trouble?

DG: The 130th anniversary of the Batoche Rebellion and Riel’s execution comes up next year, and it’s also the 200th anniversary of John A. Macdonald’s birth. This project will be performed first in association with the Dunlop. I think it’ll have one meaning particularly; people know me pretty well here as a Metis artist. I think it’ll have a good response. If I do it at Urban Shaman in Winnipeg, who knows? I’ve got plans to go to Kingston and other places where there are John A. Macdonald sculptures and do the same kind of address. So depending on the site, I think it’ll have different readings.

This interview has been edited and condensed. David Garneau’s performance Dear John; Louis David Riel will take place in Regina’s Victoria Park on November 16, 2014, at 3 p.m. In the new year, a related performance will also take place in Kingston—John A. Macdonald’s hometown—on Macdonald’s birthday, January 11, 2015. Another performance is planned for Prince Albert, Saskatchewan, in September 2015.

This post was corrected on November 10, 2015, to reflect Garneau’s use of the term “conciliation,” not “reconciliation.”