What if house paint was mixed to match menstrual blood? What if a period stain was stitched in red beads? One artist has answered these questions—and more. 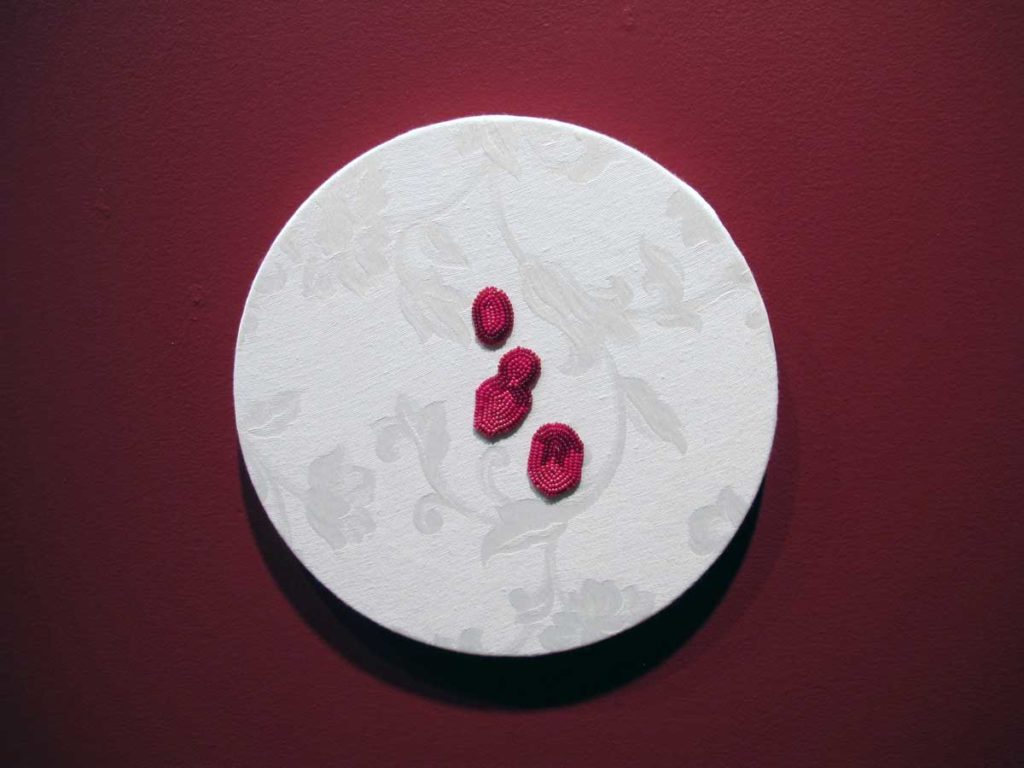 One of Vanessa Dion Fletcher's Beading Works (2016). Seven such hoops are presented in the exhibition. Photo: Kristina McMullin.

What would happen if you asked your local Home Depot’s paint counter to mix a tint that matched your menstrual blood? How would people react to a product that highlighted period stains on white clothing, rather than erased them? Who might respond differently to a menstrual-blood stain if it was stitched over in beautiful red beads?

None of these questions are theoretical to artist Vanessa Dion Fletcher.

In her current exhibition at Tangled Art Gallery in Toronto, titled “Own Your Cervix,” Dion Fletcher plays out all of these scenarios—and more. 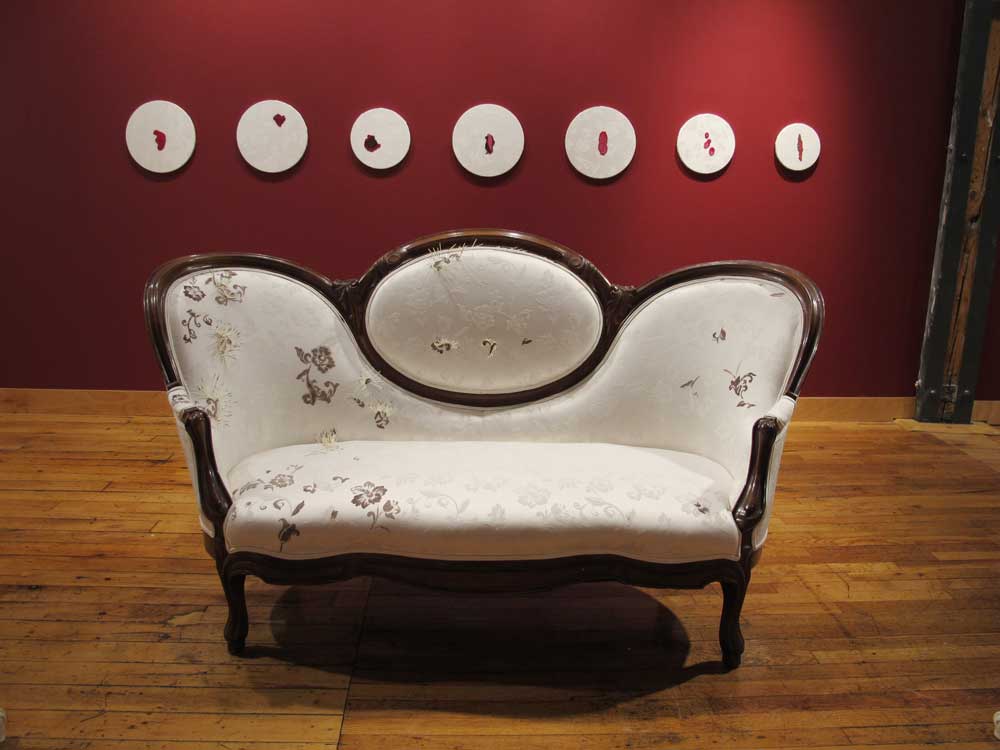 Vanessa Dion Fletcher’s Colonial Comfort (2016) in foreground, in which a settee is marked with menstrual blood and porcupine quills. Beading Works (2016) are in background. Photo: Kristina McMullin.

In one piece at the gallery, small brown bloodstains on an antique white sofa are outlined with sharp, yet delicate, porcupine quills. In another work, wallpaper in tones of brown and red is covered with repeated patterns; when one looks closely, one can see that some of the patterns are based on a diagram of blood dripping out of a pelvis. And—yes—some other walls in the show are covered with house paint that Dion Fletcher ordered mixed to match some of her own blood. (You can hear her discuss it with a Home Depot worker on a set of headphones in the gallery.)

In this way, Dion Fletcher—who is of Potawatomi and Lenape ancestry—weaves together themes of menstruation, decoration and Indigeneity in unexpected ways.

“I’ve been working on performance so often, using my body as one my main tools,” Dion Fletcher told Canadian Art in an interview over the phone from Chicago, where she recently graduated with an MFA in performance from SAIC. “And these themes are brought together in my body…they were aspects of my embodied experience that I wanted to kind of comment on and make art about.” 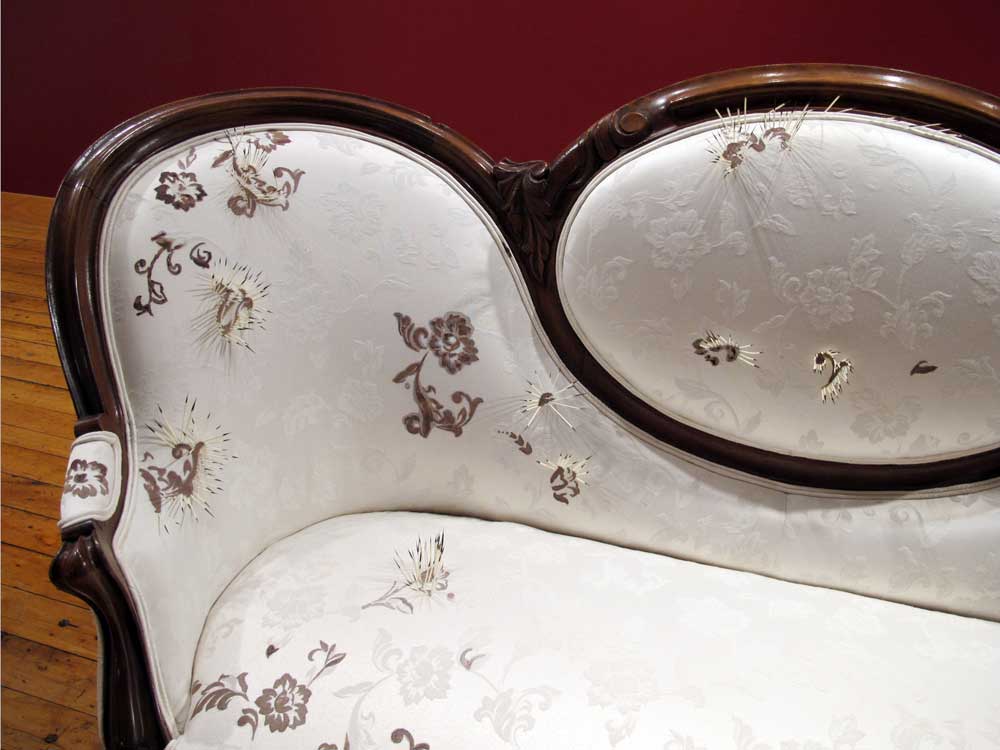 Dion Fletcher’s approach is gaining increasing notice. “Own Your Cervix” comes on the heels of three notable performances of Dion Fletcher’s Menstrual Accessory, in which the artist, clad all in white, pitches a new “product”—namely, a small bottle of pinkish ink that can cover over (but actually also highlights) brownish blood stains around the crotch.

After introducing Menstrual Accessory at the Santa Fe Art Institute in July 2016, Dion Fletcher went on to present it at Toronto’s 7a*11d International Performance Art Festival in October, and at Miami’s Satellite art fair in December (where it was highlighted in a fair-week roundup by Artnet).

While Dion Fletcher has long been interested in the “complexities of what defines a body physically and culturally”—some of her earlier work, for instance, consists of installing large-scale wampum belts in public space—her practice didn’t start to address menstruation until about four years ago. She started with the beading-on-blood-stain works; then, in her first semester of graduate school at the School of the Art Institute of Chicago, moved on to the furniture and wallpaper and paint-tint works. As time went on, a desire to critique some of the school’s policies led to her Menstrual Accessory performance and installation.

“At school I had a lot of critiques, and I was often in this presentation mode,” Dion Fletcher recalled regarding the development of Menstrual Accessory. “And then, the school has a lot of really strict rules, like not using blood or bodily fluids in the school for health and safety reasons. So I started wearing white and bleeding into my pants as a way to question that rule, and get the administration thinking about the blood that is present in the school every day.”

“This is really poignant for me in terms of talking about what is acceptable and not acceptable, and what aspects of a female body, or a body that menstruates, are acceptable or not,” Dion Fletcher said. 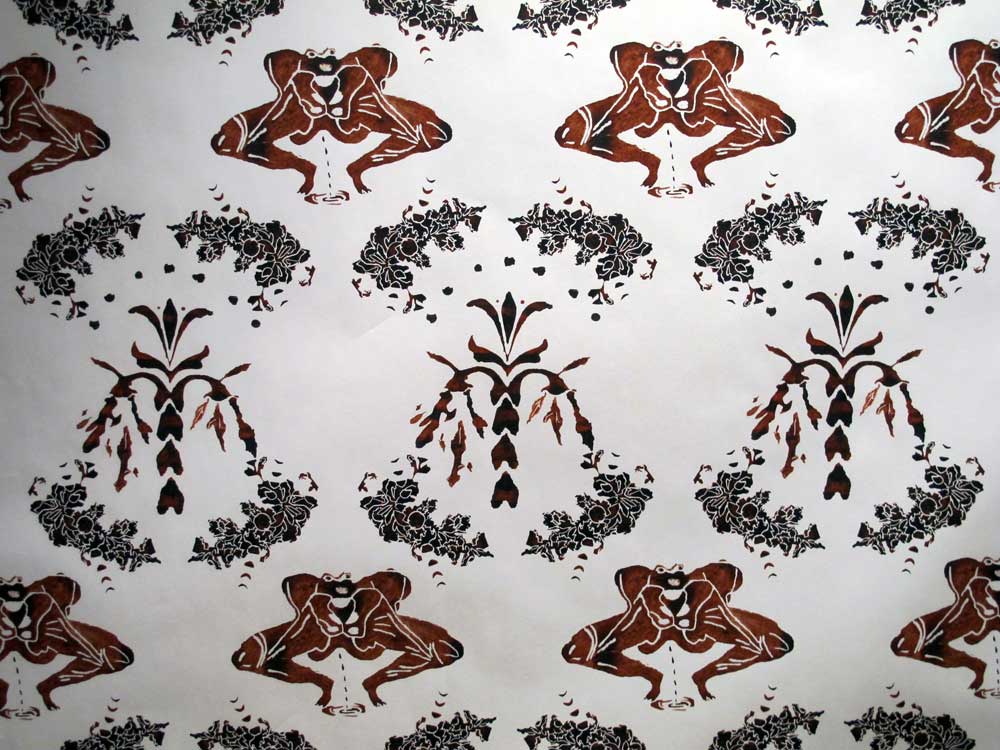 And that’s something not only Dion Fletcher is concerned about. There has been a surge of menstruation-related artwork and social-media activity in recent years: Rupi Kaur’s 2015 photo series period., made while she was a student for a class project, was initially banned from Instagram, which deemed it unacceptable. Petra Collins’s 2013 line-drawing design for an American Apparel T-shirt that showed a masturbating, menstruating woman also sparked controversy. Chloe Wise’s Irregular Tampons series comments on marketing towards menstruating women. And hashtags like #TweetYourPeriod and #RedSummer have been used by many on social media to try and destigmatize what is, for millions of people worldwide, a monthly (or sort of monthly) reality.

“The conventions of menstruation have been frustrating, probably, for a lot of people for a long time,” Dion Fletcher said when asked about this phenomenon. “I think it’s exciting to be part of the conversation around it.”

At the same time, however, Dion Fletcher is careful to note that she is basing the work in her own physical and cultural experience—and she doesn’t expect that same experience to extend to all other people, or for her work to read as universal in any way.

“I made the work from my understanding of my physical experience, feeling the tensions and incongruities in that, and then working and trying to create a space where other people could maybe feel like they could engage”—though not necessarily identify or feel represented, Dion Fletcher said.

She also hopes that the framing of the project welcomes a broad audience.

“Everyone is invited to come to it, whether or not they are persons who have a cervix,” Dion Fletcher said. While part of the gallery installation consists of an area for “self-examinations,” for instance, and a related workshop also took place in the gallery earlier in the exhibition, Dion Fletcher emphasized that “self-examination” doesn’t have to be physical—it can be “a literal introspection, or a more metaphorical one, through conversation.”

Vanessa Dion Fletcher’s “Own Your Cervix” continues until March 31 at Tangled Art Gallery in Toronto. Fletcher will also perform at Vancouver’s Queer Arts Festival in June. 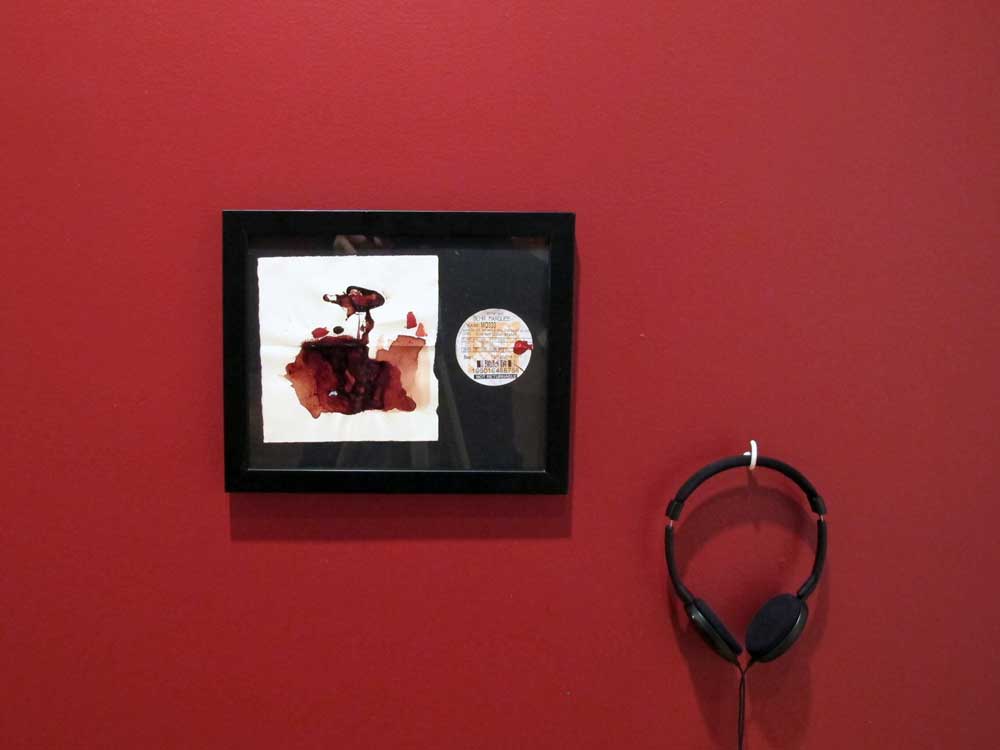