R.M. Vaughan discusses his new book, which traces the increasing prevalence of insomnia and argues that it is affecting our health and our art. 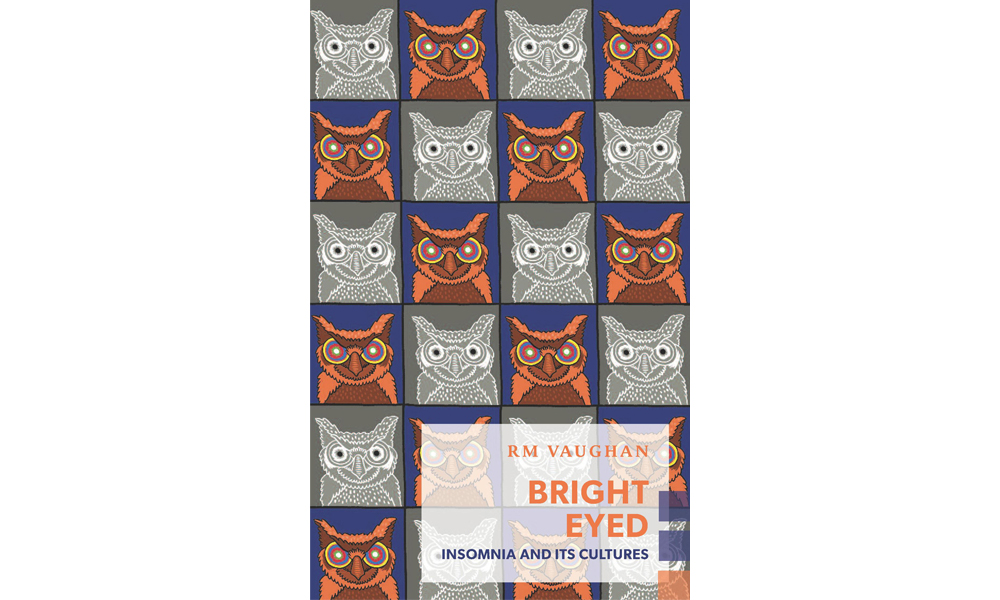 R.M. Vaughan can’t sleep. It’s the impetus behind his new book, Bright Eyed: Insomnia and Its Cultures, which takes an expanded look at fitful nights, and sees Vaughan canvassing artist Douglas Coupland (who is known to sleep for 12 hours every day), a doctor in Reykjavik, his friends who toss and turn into the wee hours of the morning, a Montreal sleep specialist and more. Over the course of these discussions, he arrives at the conclusion that late-capitalist pressures are keeping countless people awake, creating a widespread condition that is affecting more than just our health.

Caoimhe Morgan-Feir spoke to Vaughan about his research and examined his arguments that sleepless nights are taking a toll on the visual arts.

CMF: What is an “insomnia culture”?

RMV: As a lifelong insomniac, I’ve always felt that I was alone, and that I was outside of the world. In the last 10 or 15 years, I’ve noticed that I meet more and more people who are also chronically suffering from insomnia. I realized this is a larger issue.

We have naturalized not sleeping—we have a culture that is defined by being both chronically under-slept, and one that also fuels being under-slept. A big chunk of that is the concept of the 24/7 work day, and a level of productivity that late capitalism is driving people to: the idea that sleep is wasted time.

It’s very tempting to say, “Oh it’s all these devices we have.” But it’s not about the devices and the technology; it’s about our feeling that we need them.

CMF: Is this a recent development?

RMV: Yes, but it’s something that cultural theorists have been aware of for some time. The two books I read most extensively and quote from (Jonathan Crary’s 24/7: Late Capitalism and the Ends of Sleep and Eluned Summers-Bremner’s Insomnia: A Cultural History) were both written in the mid- or early 2000s.

CMF: What effect have these changes had on cultural production?

RMV: In the book I go over several different genres I think are defined by the fact that we live in an insomnia culture. I’m not describing these works to deride them, but I’m pointing out that insomnia culture has an aversion to the contemplative, the still and anything that can’t be easily referenced to something else. That breeds work that looks very jejune or childish and, on the other side, the New Minimalism, which stresses no effort.

CMF: You write that, “The insomniac mind…shuts off the intellectual urge to problem-solve, and seeks comfort in a low-grade, profoundly (and chicly) disinterested, reflex nihilism.” Reading this out of context, I would guess it is a description of “Millennials.” Is there connection here?

RMV: No, no—it’s pervasive, it’s everybody now. I could easily name seven artists off the top of my head who are my age or older and are making work that feeds into this. It’s not a generationally defined thing.

However, I think that your generation has a very different relationship to sleep, and I talk about that in the book, with my brother’s children who are all in their 20s. Their work patterns are to work, work, work and sleep very little. They often use language like, “I powered through the day, and then I crashed.” They have this violent, confrontational language around sleep. I think that might be a particular thing to your generation.

CMF: For me, artists like Camille Henrot and Ryan Trecartin, who have streams of information that are totally overwhelming, would be representative of an insomnia culture. But I wouldn’t identify them with the two schools you note. Could that be another offshoot?

At one point in the draft of this book I named lots of names, and had lots of examples. And then I remembered that I live in Canada, and I decided not to do that. I’ve been down that road before.

CMF: What is the effect of all of this on an art-going public?

RMV: In terms of how people look at art, I think they tend to absorb it in masses. There are big shows with lots of stuff in them, and people go on things like the Canadian Art Foundation’s Gallery Hops, and they see a whole bunch of stuff at once.

Also, most people now look at art online. They are constantly streaming and looking at things. I know many contemporary artists who rarely set foot in contemporary galleries, but they know what’s going on.

CMF: Is fear a motivating factor in all of this?

RMV: Absolutely. I did a talk at a library a couple of weeks ago in the suburbs, and who’s at a public library in the afternoon? Seniors. So I was talking about insomnia, and they all read it as exclusively a health thing. When they spoke about work they said that, when they were of working age, their day stopped at a certain time, and they had the rest of the day and evening to themselves. One gentleman said, “When the bell rings at the car factory you don’t think about cars anymore.”

I explained to him that that’s not how capitalism works anymore. When you leave the car factory, or whatever you did that day, someone will say you are 3% behind the factory in Mexico, or you’re 4% behind the factory in Thailand, and when you come back tomorrow you need to catch up on that 4%, so you can’t sleep, because you’re worried, so you’re less productive the next day, so you get in more trouble, and it goes around and around.

Capitalism now is relentless in its pursuit.

CMF: Occasionally I worry I’m missing something work-related after hours, but I might just be deeply slothful, because it doesn’t bother me much.

RMV: No! It’s not about laziness. That’s something that your generation has been brainwashed into, thinking that sleep equals laziness.

CMF: In the closing chapter, there is a fairly grim prognosis—a sense that things are unsustainable, and we will face either a break or a dire future. That’s for the world at large, but what about the art?

RMV: If these predictions, my own and the ones experts are offering, are true, late capitalism will essentially eat its ants and destroy its own systems, and I can’t imagine what art would come out of it.

Sleep and its pleasures will be something that the wealthy purchase, and art will play a role in that. In the same way that futurists suggest we will buy oxygen (and the way we already buy water), sleep could become a commodity that we have to purchase. It might breed an entire generation of artists who make sleep-based work.

I don’t want to end on a grim note, though. Dr. Karlsson from Reykjavik told me that Icelandic people don’t get seasonal affective disorder or depression when it’s dark during their winters because they have a practice of never being alone.

I thought that might be the revolutionary act: if you are an insomniac like me, and it’s four o’clock in the morning, you go online and see that hundreds of people you know are also online. If, in the next step, we could see each other, and create social events and a social dynamic around our inability to sleep, that might begin the healing of this.

It’s hard to escape capitalism, but those kinds of socially driven enterprises might be a way out, because they’re inherently collective.