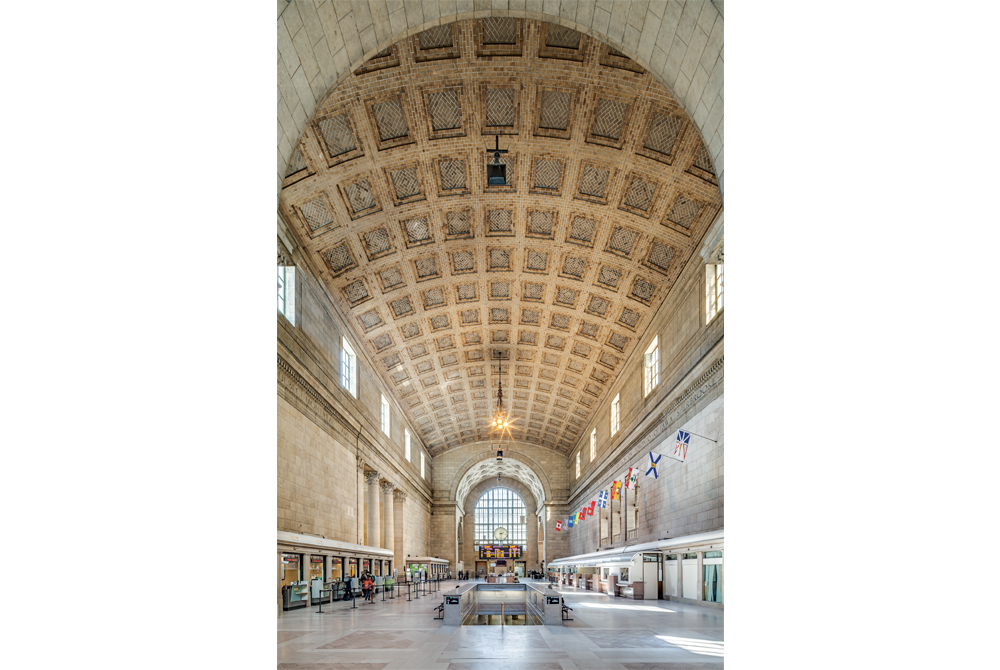 With its coffered ceilings, marble floors, barrel vaults, Tuscan columns outside and Corinthian capitals inside, Union Station is Toronto’s monument to neoclassical Beaux-Arts architecture. In the first half of the 20th century, in its heyday, it was a limestone palace that lent grace and dignity to national rail travel. Edward, Prince of Wales, later King Edward VIII, was one of its commuters. When he officially inaugurated the station on a royal tour in August 1927, he bought a ticket to Alberta for $71.20.

Recent decades have shaded its glory. Suburban GO Transit service beginning in the late 1960s brought a flood of daily commuter traffic that has grown lockstep with the expansion of Greater Toronto. With the flood of foot traffic came an infectious commercial life of muffin shops and convenience stores that now frame the rush-hour traffic that flows through the low-ceilinged bowels of the building from the connecting subway. Recent street construction and interior renovations have brought impassable trenches and blind hoardings to the site, yet the outside view, especially when light rakes the columned facade, remains one of the highlights of any visit to the city. Union Station is Toronto at its most grand. This summer, tourists will come in droves as the Union Pearson Express starts to roll as a direct link from the airport and armies of sports fans arrive for the Pan Am and Parapan Am Games in July and August.

Over the past year, with the station at its transitional worst, art arrived as an amenable distraction. In January, the Warsaw-based Villa franchise inhabited the station with invited galleries and installation projects that struggled with the indifferent square footage of the Great Hall. Despite some winning totemic sculptures at either end by Dean Drever and Derek Sullivan, Villa Toronto was not a banner day for either public or contemporary art. This summer, however, with renovations complete, Andrew Davies and arts organization No. 9 get a chance to do better, with an official Pan Am cultural project titled “Water’s Edge.” The project brings an award-winning, hemispheric A-list of six photographers—James Balog (USA), Edward Burtynsky (Canada), Gustavo Jonovich (Argentina), Cristina Mittermeier (Mexico), Sebastião Salgado (Brazil) and Jorge Uzon (Chile)—showing photographic prints that survey the use and abuse of global water resources as they stand in the 21st century.

Aside from the pressing social, political and environmental issues at stake in the images, the project is also something of a grand metaphor for the fluid pedestrian traffic that has come and gone through the Great Hall. If “The sea is History,” as poet Derek Walcott writes, then water is its ever-shifting contents.