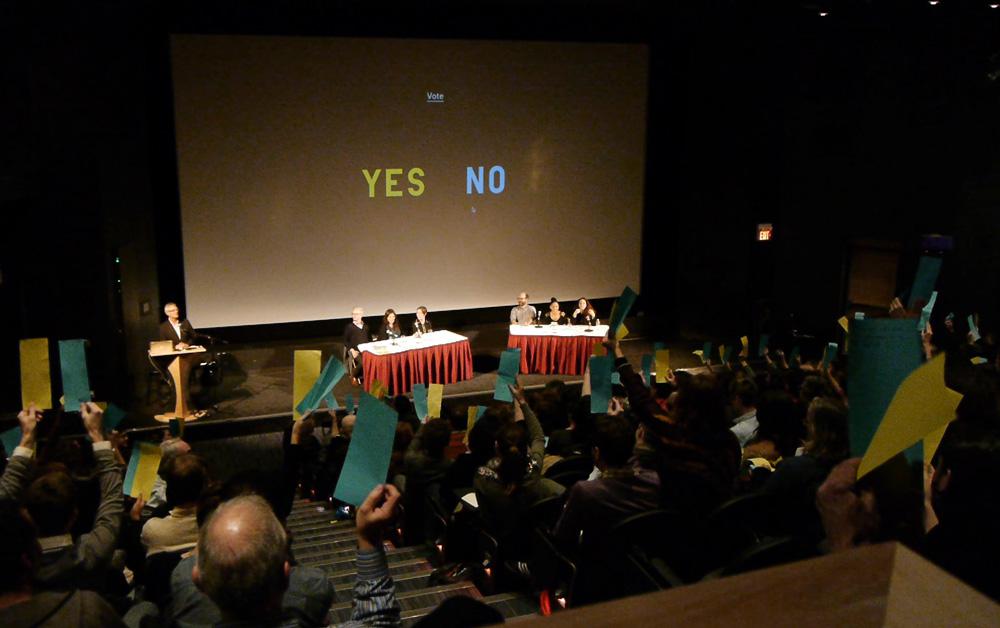 Matei Bejenaru’s presentation in the “States & Markets” session at Institutions By Artists, October 13, 2012

Zin Taylor A Story of Stripes and Dots (Diagram of a Knife, with Memories) 2012 Courtesy the artist and Jessica Bradley

I have always wanted to like the work of Zin Taylor. The thing is, until recently, I had never quite figured out how. It’s not that this uncertainty was a knock against Taylor’s practice, which has garnered increasing critical praise both in Canada and abroad (formerly of Toronto, Taylor has been based in Brussels since 2008). But what I’d seen of his work, which typically ranges in eclectic fashion across sculpture, drawing, performance, video and bookworks, often left me with mixed feelings—bemusement, frustration and intrigue among them—and a nagging question: What does it all mean?

There seem to be at least two ways to approach Taylor’s work—as objects and as stories—as I discovered this spring in his latest exhibition at Jessica Bradley Art + Projects (now Jessica Bradley Gallery). Titled “The Story of Stripes and Dots (Chapter 2),” the show offered an oddball assembly of sculptures—variously painted in black-and-white stripes and dots—that worked, on one level or another, to address the essence of objecthood. (Taylor’s 2009 exhibition “The Bakery of Blok” at the gallery covered similar ground, though, with bread dough, baking implements and wooden blocks.) Here, a pair of dangling, snake-like works, a hanging sphere, a totem-laden vitrine and a plinth-mounted “arm” suggested a kind of progression (or digression?) from free-form to structured materiality and presentation. At the same time, Taylor’s collection of handmade objects offered few clean geometries, keeping any formal distinctions of privilege constantly shifting and pointedly confused.

For all of that conceptual-material play, the linchpin in this show, and in Taylor’s work on the whole as critic and curator Dieter Roestraete has argued, is his oblique but deft knack for storytelling. Each of these sculptural objects and assemblies, along with the accompanying suite of drawings, can be read as narrative cues that touch not only on the history and language of object-making, but also launch flights of imaginative fancy. Form is not an anchor or endpoint, but rather a wandering dialectical prompt. As the gallery press release for the exhibition put it: “Dots are points in a conversation—the tangential narrative of said conversation is represented with a stripe.”

It seems obvious now, but thinking through Taylor’s practice in this way has put my bemusement and related feelings in a new place. I spent some time on his website looking at other projects and installations; The Flute of Sub from 2007, The Crystal Ship from 2008, and Eight Pilot Episodes for the Bakery of Blok from 2009 stand out. The majority of Taylor’s projects have only shown outside of Canada, including in a six-year retrospective last year at Ursula Blickle Stiftung in Germany. It seems high time for more home-crowd reappraisals of his work. Now, for me, the question is, When do we see a Taylor survey exhibition in Canada?

2. Zidane, A 21st Century Portrait at the Art Gallery of Hamilton (also shown at Galerie de l’UQAM, Montreal, and the Reach, Abbotsford)

There was a massive buzz around Douglas Gordon and Philippe Parreno’s Zidane, A 21st Century Portrait when I first watched it at an Images Festival screening put on the Power Plant and DHC/ART in the summer of 2007. The film—which literally tracks the play of French soccer star Zinédine Zidane through a single 2005 match with his club team, Real Madrid, accompanied by a moody soundtrack courtesy of Scottish post-rockers Mogwai—had premiered to critical acclaim in Cannes the year before, and to be able to see it in Toronto seemed, at the time, like a rare and satisfying coup. (Not to mention that Zidane had established himself as even more controversial or heroic, depending on your point of view, after his famous head butt in the 2006 World Cup final.)

So it was totally unexpected when, a few months later at the National Gallery in Ottawa, I came across the same film—only this time presented as a monumental two-channel gallery installation. If seeing the Zidane for the first time in Toronto was electrifying, this was awesome. Two theatre-screen-sized projections played side-by-side in a large gallery: one, the cinema version; the other, raw footage that captures other angles and extends the film until the end of the match (the cinema version ends when Zidane is red-carded and sent off with minutes left to play). Shot using 17 synchronized cameras tightly focused on Zidane both with and away from the ball, it’s a fascinating portrayal of an international sporting icon at the pinnacle of his career. At times, he’s pensive and brooding, as if he’s stalking the play as it goes on around him; other times, he explodes, at one point setting up a fantastic turning-point goal. Throughout the film, despite the deafening roar of the crowd, you never quite shake the sense that he’s out there on his own, watching and waiting, wondering what will happen next. You feel that tension between expectation and the unknown as a viewer; sporting fan or not, there’s an authentic humanity to it that’s undeniable.

For the past couple of years, Zidane has been touring the country, with stops earlier this year in Montreal, Abbotsford and Hamilton. (It’s at the AGH until April, then it moves on to the Musée des beaux-arts de Sherbrooke and the Sir Wilfred Grenfell College Art Gallery in Corner Brook.) It’s still awesome to see the work even years after its initial accolades, and the NGC’s commitment to bring the work to audiences across the country deserves to be noted. But what really brought this back to mind for me at year’s end was the media play that the National Gallery has had of late for its co-acquisition of Christian Marclay’s The Clock and its subsequent exhibition in Ottawa and Toronto. I wondered why adding Zidane—which surely stands up to The Clock in many ways—to the gallery’s collection hadn’t prompted similar attention. As NGC curator Jonathan Shaughnessy explained via email, the gallery had been in early on the installation version of Zidane—in fact, it purchased the first edition in 2007 and worked with Gordon to refine the installation specs for the work. “Indeed,” writes Shaughnessy, “it is largely due to the increasingly recognized strength of the gallery’s holdings of major video pieces such as Zidane and Pierre Huyghe’s A Journey that Wasn’t that the NGC is able to make a strong case to continue adding exemplary works [like The Clock] in the medium now and in the future.”

3. Institutions By Artists at the Goldcorp Centre for the Arts, Vancouver

Earlier this fall, I reported at length on the Institutions By Artists conference, the latest national summit of artist-run-centre professionals and, while I don’t think it’s necessary to go back into those details (you can read my report here), I’d be remiss if I didn’t include it as one of my highlights of the year. What struck me most about this gathering of artists, curators and academics (among other art professionals) from across the country and the globe was the overriding sense of optimism, activism and urgency—along with the many concrete examples of artist-led projects and practices working for and against institutional structures to back it up. There is a new generation coming of age in artist-led culture, and for them, complacency is not on the agenda. For those of us working in the trenches of what can sometimes be a mystifying industry, that’s not a bad thought to take forward into the new year and beyond.