The Ward, Toronto: A Blank Space

Luis Jacob reflects on Toronto’s rich local history, and colonial tensions, through an archival photograph of the Ward neighbourhood. 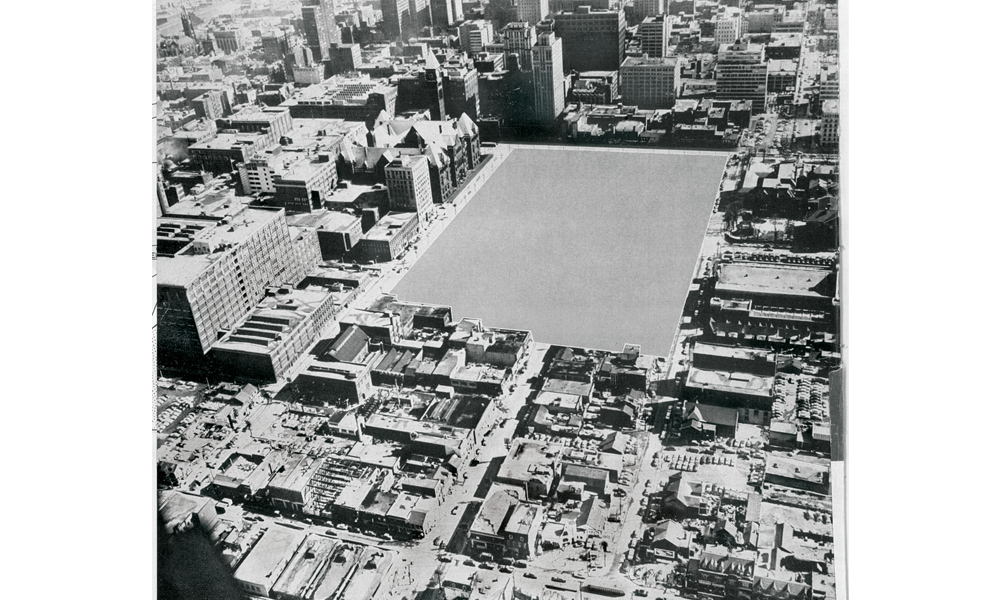 Toronto is the place I call home. It is a city where the very question of “place” is fraught with tensions. Toronto, like the rest of the Americas, is the product of colonial relations between settlers and First Nations people. Its culture is informed by British traditions constantly reshaped by immigrants to a city that is today considered to be among the most multicultural in the world. Its ascendancy as an international centre of business and finance leads the invisible hand of global real-estate speculation in radically transforming the city’s built form, as well as the social dynamic of its residents.

In Toronto, these tensions—political, cultural, economic, urban and social—are haunted by a peculiar ghost: the deeply felt experience that they are being negotiated as if on a blank canvas—that they are negotiated on a vacant lot.

Documents pertaining to the history of Toronto reveal an abiding investment in this notion of the blank canvas. The Toronto Purchase of 1787, for example, was an agreement conducted between the Mississaugas of the New Credit First Nation and the British Crown, which established the colonial territory that eventually would become the city of Toronto. The British surveyor who documented the agreement drew a pristine rectangle to represent the land—ignoring most of the existing natural and social features of the terrain, and treating the land as signifying nothing but an empty page waiting to be inscribed at will.

Conditions of competition: City Hall and Square, Toronto, Canada (1957) depicts the downtown core from an aerial perspective. The Ward—the working-class and immigrant neighbourhood where Viljo Revell’s modern City Hall would be built—appears in the image as a white quadrangle. In the mid-1800s, the Ward was home to Toronto’s African Canadian community, many of whose members were escaped slaves and freemen from the United States. Jewish and Italian communities settled there during the early 20th century (Lawren Harris created a memorable series of paintings of their neighbourhood at this time). In 1946, Toronto City Council authorized the expropriation and razing of the lower Ward, the location of the city’s first Chinatown. All this appears in the photograph as terra nullius, a void ready for appropriation by capital and the state.

I have often heard people say, “Toronto has no history.” To my eyes, this image serves as a perfect allegory for the chasm in Toronto between the richness of local history and the vacancy of local memory. It grants appropriate form to the ghosts that haunt this place I call home.