Gary James Joynes’s experiments with sand and noise cost him a dozen high-end speakers and, for a while, his sight. But the resulting artworks border on the divine 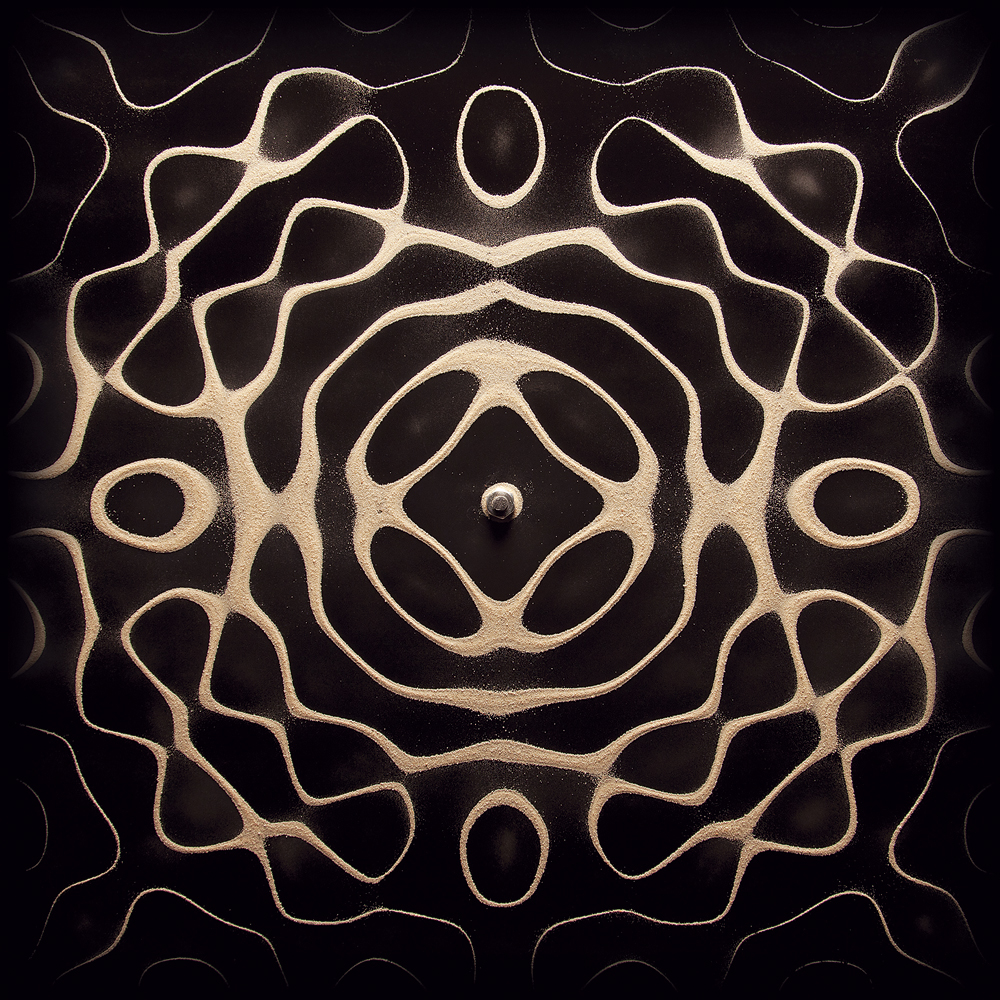 Gary James Joynes creates sacred art through a kind of sonic violence. It’s a paradox that, in 2009, at a residency in Banff, nearly cost him his sight.

An Edmonton sound artist with a background in experimental music, composition and photography, Joynes is a fan of Brian Eno’s ambient music but grew up on Led Zeppelin and Pantera. During the Banff residency he was working on a machine called a wave driver: simply put, it’s a large metal plate with a bolt at its centre, suspended over a large audio speaker.

By experimenting with different sounds at different volumes (most of them very, very loud), Joynes was able to create visual patterns by sprinkling sand on the wave driver’s vibrating plate. The resulting patterns, he found—dependent for their shapes on the sound frequency and the artist’s impulse—were not unlike the sand mandalas created by Tibetan monks through less technological means.

He didn’t intend to get spiritual with his work. But that’s where he wound up.

“They put me in this one studio in the side of the mountain,” he says of his time in Banff, “where you don’t disturb people.” With the aid of computers he played a game of hit-and-miss, using sine waves to vibrate his metal plate “canvas”; at 423.62 Hertz, for example, which sounds like a flatlining heart monitor, the sand would form into symmetrical loops and valleys on the surface of the metal.

During these experiments he destroyed at least a dozen high-end speakers. One Saturday morning he awoke to find he was seeing double numbers on his alarm clock, and went to a clinic. Is it possible, he asked the doctor, that by sitting in a room with piercing high frequencies for 14 hours a day, 7 days a week, I could harm my eyes?

The doctor admitted that he had no idea. Such are the vagaries of occupational health and safety when it comes to working with sight and sound.

In any case, the physical effects soon wore off. But what Joynes had in the end was a technique, which could be adapted, finessed and then photographed, filmed and set to a soundtrack to create the room-size installations he’s presented at galleries and events such as Edmonton’s Nuit Blanche.

After Banff, he says, “I was curious if I could take it further into building real conceptual pieces. It became this meticulous process of finding a resonant form and then wiping the plate clean and then very slowly dropping the sand, watching where it’s migrating, and then slowly drawing and creating the work, and even sculpturally building up relief.”

He calls it frequency painting: the frequency of the sound is the brush that moves the medium—sand—on the plate, forming patterns that are, at some point, beyond the artist’s control. Newtonian physics, in a way, is the collaborator.

Eventually he met curator Evelyn Tauben, who was working on a show for Toronto’s Koffler Gallery called “Spin Off: Contemporary Art Circling the Mandala,” which would present artists’ works adapted from or inspired by variations of the ancient Hindu and Buddhist form. In simple terms, a mandala is a complex, geometric composition that can become a focus for meditation, the way an icon in Eastern Orthodoxy or the Roman Catholic rosary acts as an objective centre for prayer. The whole of the composition is intended as a symbolic representation of the cosmos; its painstaking, ritualistic creation—with sand, for example, in Tibetan Buddhism—establishes a sacred space.

“Spin Off”’s stated goal was to explore “a convergence of the sacred and profane, of East and West, of contemporary and ancient.” When Tauben saw photographs of Joynes’s new work, she saw mandalas immediately and was surprised to learn they were made from sound waves. Invited to participate in the show, Joynes created Ouroboros, in which a filmed reproduction of the frequency paintings were projected onto a mound of sand spread on the floor, all set to an accompanying drone soundtrack composed and sung by Joynes, using the sound frequencies that formulated the sand patterns in the first place.

The result was a trippy, self-reflexive and hypnotic sound-and-light installation that, in some cases, led viewers to sit on the floor to soak it all in. Joynes describes the experience as “meditative,” and indeed Ouroboros is just abstract enough to catch focus without making specific demands on the viewer.

It’s all on YouTube. Where the sacred and profane fit in is up to the viewer. Every artist has to contend with the historical moment in which they work, and for Joynes the current moment asks for conversation about the use of sacred imagery in art, in commerce: it’s political. But who, after all, is making the mandalas here? Gary James Joynes or the 423.62 Hertz worth of ear-splitting tone that vibrates the metal plate?

“In my exploration of sound,” Joynes wrote in an email after carefully considering the issue of cultural appropriation, “I have tried to document the physical nature of sound waves as thoroughly and aesthetically as possible. I am interested in the beauty and universality of the patterns formed, and their similarity to patterns formed in nature as well as in widespread cultures.”

For Joynes, the primary motivation is making visible the science of sound. It was not his initial idea to call his creations mandalas, and mostly he doesn’t, but the resulting patterns and forms that emerge invariably elicit comparisons to imagery not just from Buddhism, but across world religions.

Critically, what’s sacred about Joynes’s art is that over which he has least control: the accidents of nature. Another work called Broken Sound is an interrogation of the sonic violence that (briefly) robbed him of his senses back in Banff. Short of bursting his eardrums and sending himself blind, he did, in fact, burn out a few speakers trying to make his frequency paintings. So he took the speakers apart, studied their innards. Using a macro lens he photographed the copper voice coils (basically, coils of wrapped wire) that form the heart of speakers’ function.

“I saw,” he says, “that I had a range of darkening and scarring [on the coils] and even some wires were completely burnt and charred. I saw the opportunity to tell a life-cycle story. We go through life, we age and darken and get scarred and eventually the metaphor is the wire breaks and that’s the moment of death.”

A Buddhist friend told Joynes that the coils had reminded him of a large stone wheel from a Buddhist parable, and that the flawed portions represented moments of enlightenment. For a non-Buddhist, Joynes was somehow speaking its language.

What’s appealing about Broken Sound, judging from the YouTube scale model, is how physical matter, damaged and vulnerable, is rendered abstract—this is wholly the artist’s doing. By building a custom slow-motion turntable and filming the coils with a macro lens, then projecting the results with an accompanying drone soundtrack on four giant screens, he achieves a grander effect than with the sand drawings—of that which is both familiar and unfamiliar at the same time. Joynes promotes these coils from simple damaged matter to something colossal, supernatural, even intimidating. It’s an impressive effect.

“I’m not trying to give people a religious experience,” he says, “but something really affects them.” They sit on the floor. They report to him that the floor seems to move, to ascend upwards. He’s tried sitting on the floor himself, and has had the same experience. It’s not unsettling but kind of “healing,” he says. “In a fast world bombarded with technology we can’t escape, when we find a moment where we’re given permission to slow down, you can see people take a deep breath and give themselves time to be present, literally slow themselves down.”

Joynes’s work—from the sand mandalas to the broken coil projections, all set to harmonic sounds—can have the therapeutic effect of making time seem to creep on by. “I’m trying,” he says, “to create spaces for people to find that.”

Tom Jokinen is a Toronto writer and radio producer. His contributes regularly to the Walrus, the Globe and Mail and CBC.

This post is adapted from the feature article “The Sound of Science” in the Winter 2018 issue of Canadian Art, which is themed on “Care and Wellness.” To get every issue of our magazine delivered to you before it hits newsstands, visit canadianart.ca/subscribe.