In 2013, Shinobu Akimoto and Matthew Evans launched an artist residency that got rid of the art-making. Here’s what they’ve learned along the way. 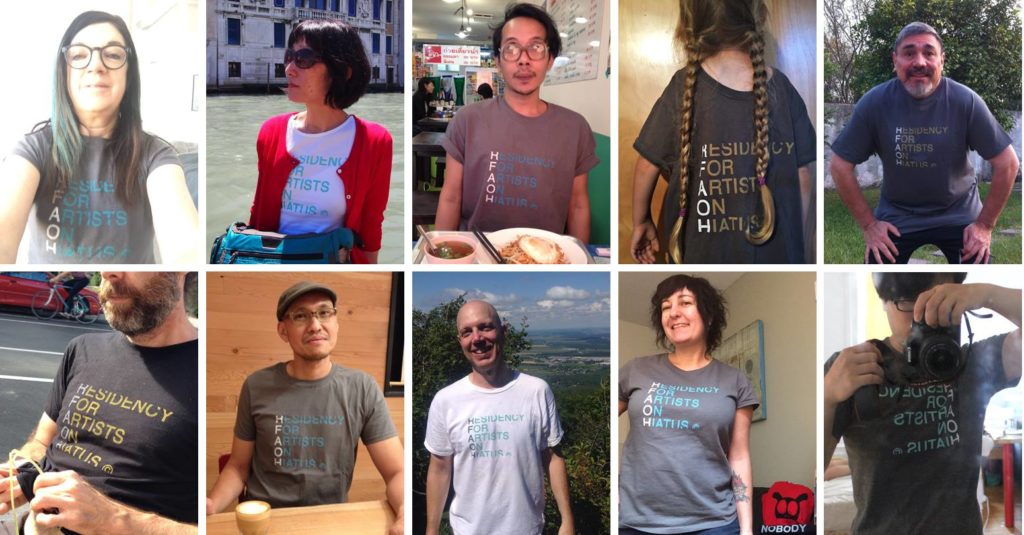 Since 2013, 19 artists from 13 countries have participated in the Residency for Artists on Hiatus. Some met up at the 2017 Venice Biennale along with board member Tehching Hsieh.

The Residency for Artists on Hiatus is funded in part by T-shirt sales—and since the residency has no physical centre, the shirts also help identify its residents. Photo: RFAOH Facebook page.

The Residency for Artists on Hiatus explicitly encourages artists to engage in a plan of “on-hiatus” activities—or non-activities. Photo: RFAOH Facebook page.

Planting a garden. Brewing beer. Training for a 100-kilometre run.

These are just some of the things that artists have done during the Residency for Artists on Hiatus—a project launched in 2013 by artists Shinobu Akimoto and Matthew Evans.

So far, 19 artists from 13 countries have participated in the Residency for Artists on Hiatus, which grew out of a question of what determines one’s artistic identity—and how much pressure exists to maintain that identity.

The residency exists in the form of a website only, and residents are selected based on their proposals of “on-hiatus” activities (or non-activities). While receiving a modest stipend, they post periodic reports about those activities on the residency website. Then, at the end of the residency term, participants upload a final report to the website for anyone to read.

While the Residency for Artists on Hiatus can be viewed as a kind of critique of the art world and its demands for constant productivity and engagement, it has also been increasingly embraced by that world—until March 3, for instance, Akimoto and Evans are holding residency office hours and workshops at the DHC/ART Foundation in Montreal. (Workshop topics are explicitly “non-art” and include macrobiotic foods, guitar chords, functional origami and more.)

Here, in a phone conversation, Akimoto and Evans chat about the Residency for Artists on Hiatus—and what is it doing (or not doing) next.

Q: Why did you initiate the Residency for Artists on Hiatus?

Shinobu: It mostly came from our own personal experiences, or where we were with our own practices.

Matt: I had been abroad away from the art community and had come back to Canada, and I wanted to re-integrate into my art practice again.

Shinobu: I was in this stage in my career where—it’s a very common thing—it might be some creative block, or something personal happening, or there is a lack of resources and outlets or opportunities, and you kind of stop your art practice. But I wanted to stay in the arts rather than quitting, so this came to us as a new way of making art.

Matt: We started sending proposals to mega-institutions outside Canada. None of them replied. It was a bit ambitious, probably. We wanted the nonsense of not just having a residency for artists to not make art, but also the nonsense of having a major institution reify those types of practices.

Shinobu: So that is how it all started. It was DIY and a bit like a hack.

Q: What does an artist typically do while on the Residency for Artists on Hiatus?

Shinobu: They do whatever they have proposed as their on on-hiatus project. Sometimes, in an application, some people say this is something they have wanted to do, while other people want a chance to re-evaluate their life in the arts.

Matt: Yes, some are having doubts about their own careers and want time to think about it.

Shinobu: My favourite is someone from UK, George Major, who trained himself to do a 100-kilometre marathon.

Matt: There is a collective in Brooklyn, MomenTech, that are quite active, and they just wanted to take a break to dedicate their time to group and online meditation.

Shinobu: Another, Milena Kosec from Slovenia, was really into organic gardening, so she would send us a report every month on how her organic garden developed.

Matt: Marisa Dipaola, who was living in Austria, drove her family across Europe and bought a plot of land on the Portuguese coast and started a permaculture farm.

Shinobu: And one artist from Toronto, Ryan Ringer, opened up a bar. He had this plan already but then he somehow wanted to do it as the on-hiatus project.

Matt: So there’s quite a variety.

Shinobu: Another Canadian, Lee Churchill, wanted to see if actively removing this identity of “artist” would make her happier.

Matt: All of these residents have final reports, which you can read on our website.

The Residency for Artists on Hiatus is funded in part by T-shirt sales—and since the residency has no physical centre, the shirts also help identify its residents. Photo: RFAOH Facebook page.

Matt: Initially, we were funding it ourselves—selling T-shirts and multiples to do it. Then, in 2016, we got some money from the Canada Council.

In the very beginning, well, it wasn’t really a one-liner idea, but we just thought it was funny—we had to do it. But the more we did it, and the more we collaborated, the more we’ve gone deeper and deeper into this question of professionalism in the arts, of what it means to exist as an artist.

Shinobu: And the audience has developed—a lot of people gave us interesting points of view. Initially, it was just our tiny art project, but now it almost feels like a community of people.

Matt: If we ever win the lottery, we want to bring that community together for one big thing, like a show.

Shinobu: Or a non-show.

Q: Prior to speaking with you, my perception was that this residency was creating a space for rest outside of productivity-oriented art institutions. So what does it mean, now, to collaborate with those same institutions, like the DHC/ART? How do you negotiate that?

Matt: Many people thought initially that our project was a rather straight criticism of institutions or institutionalized art practices. But in fact, right from the get-go, we wanted institutions to be involved, to endorse art about artists not making art.

Shinobu: And we also told you about our initial proposal of having someone from the art institution to be on our advisory board, which never happened as no one ever responded.

We’ve been fortunate, on the other hand, that Tehching Hsieh has agreed to be our “board member” (with no obligation) since the beginning. He has been very generous about it. We met up with him and some of the residency participants at the Venice Biennale last spring. 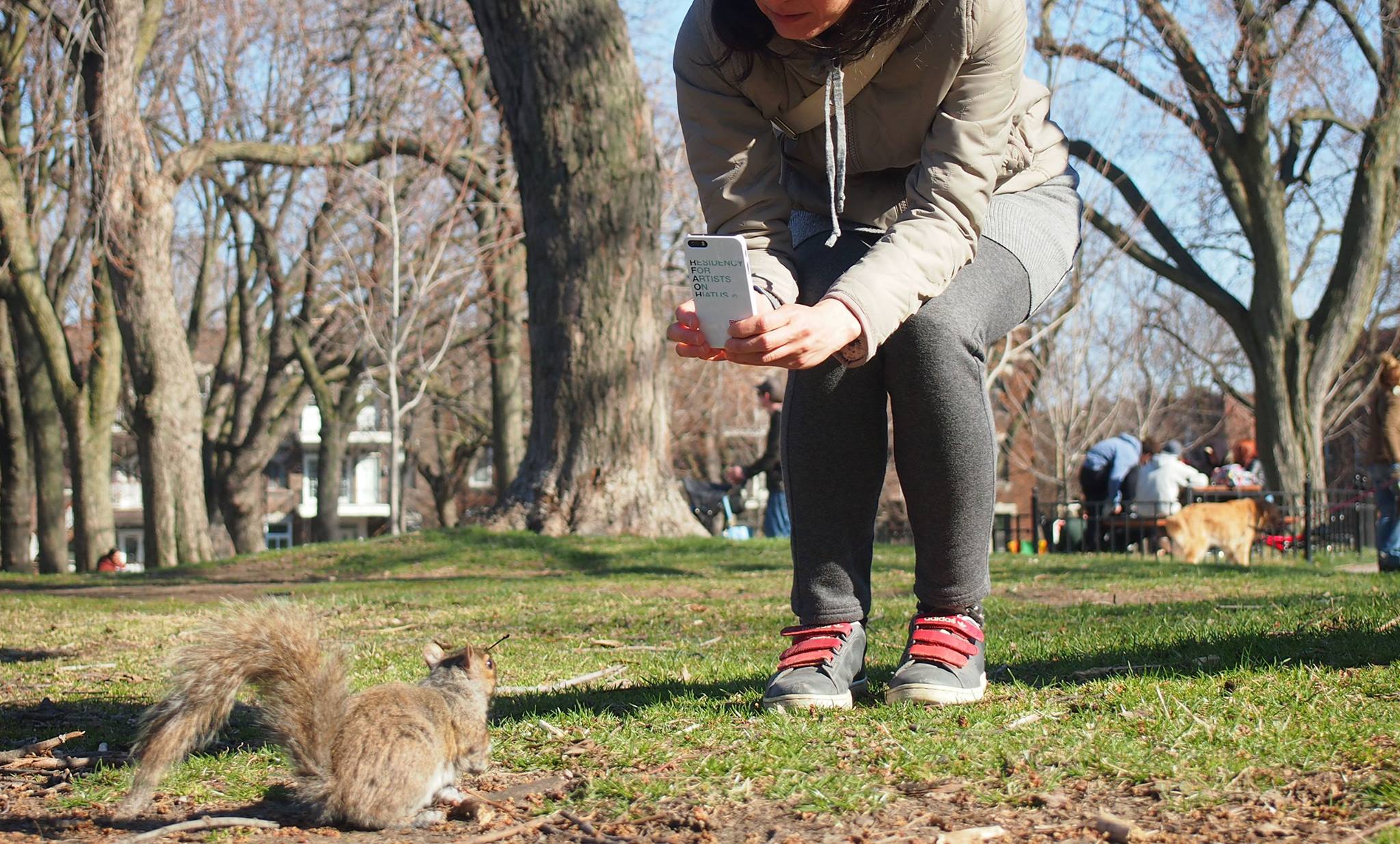 The Residency for Artists on Hiatus explicitly encourages artists to engage in a plan of “on-hiatus” activities—or non-activities. Photo: RFAOH Facebook page.

Q: How does the Residency for Artists on Hiatus intersect (or not) with the current craze for wellness and self-care?

Matt: We didn’t set out to have an agenda for therapeutic residencies. But in the end, I think it has been that way for some of our residents—some have totally benefitted just from having a space away from this pressure of producing, of being an artist of having shows.

Shinobu: Some applicants implied they have been depressed, and so on, because of the difficulty of living in the arts. We would never claim that we helped them, or anything like that, but then, in the final reports, some say they feel better.

Matt: And for the workshops at DHC/ART, we have stuff on macrobiotics and self-defense and meditation. Some of these are run by past participants in the residency.

Shinobu: I guess, coincidentally, a lot of things we want to do are in the realm of wellness or self-care.

Q: Why do you keep doing the Residency for Artists on Hiatus? What is next for you?

Matt: Right now, we are working on a catalogue or final report of our first three terms. If we are an “institution,” we thought we would have to sustain it at least for three years and need to have an annual report.

Shinobu: Actually, one of us is supposed to be taking that time in the DHC/ART satellite office every Wednesday to work on the publication. And while doing that we interact with visitors, or people can bring their own proposals for future residencies.

Matt: After that, the next big thing is to see what happens.

Q: So maybe the Residency for Artists on Hiatus will go on hiatus?

Matt: Well, it hasn’t felt like a hiatus to us!

To find out more about the Residency for Artists on Hiatus, visit residencyforartistsonhiatus.org, or check out their Saturday non-art workshops and Wednesday satellite office hours at DHC/ART in Montreal until March 3.