The Diaspora That Never Happened

Searching for portraiture in the archives of the Komagata Maru 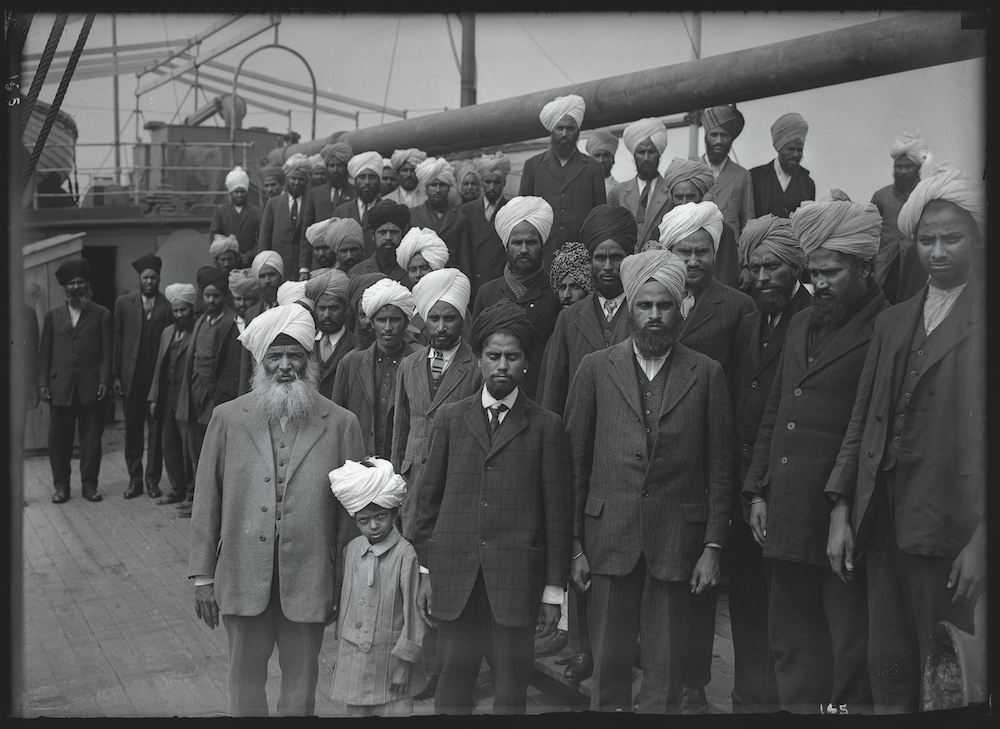 On a wall in Desh Bhagat Yadgar Hall in Jalandhar, India, as part of a memorial for those who fought against British colonialism, there hangs a portrait of Gurdit Singh, the Singapore-based Sikh entrepreneur who, in 1914, chartered a steamship from British India carrying 376 passengers seeking refuge in Canada. Only 24 made it off the boat.

In this anonymously created depiction, Singh’s features are softened. Still, he wears an expression of insistence. The black-and-white photographs taken of him following the May 23, 1914, arrival of the Komagata Maru at Vancouver’s Burrard Inlet show a man who looks less humble.

Singh was photographed alongside the mostly Sikh passengers, all staring bleakly into the camera, their eyes squinting in the sun. German American photographer Leonard Frank was commissioned by a government agency to capture the stills. In one of Frank’s photographs, Sikh Men and Boy Onboard the Komagata Maru (1914)—exhibited in “Komagata Maru: A Journey to Canada,” a show curated by Lally Marwah at the Peel Art Gallery Museum and Archives in Brampton in summer 2017—the subjects are shown standing like cavalry at ease.

Physical clues in this photograph betray the tedium of travel: most of the men wear turbans that are creased along fine, rich folds around their heads, an arrangement that feels windswept, cloth loosened by a Pacific drift.

Singh chartered the Komagata Maru on April 4, 1914, after meeting with a group of immigrants of Indian origin in a Hong Kong gurdwara, the Sikh place of worship, one month prior. They were encouraged by news that the previous year, 39 Sikhs had arrived in Victoria via Hong Kong on the Panama Maru, a Japanese carrier.

Initially, the 39 were detained on the basis of the Continuous Journey Regulation, a racist amendment to the Immigration Act of 1906, stating that “all immigrants must come to Canada via a through ticket and by continuous journey from their country of birth or citizenship.”

Worded in shrewd, xenophobic legalese, the act insisted upon a direct, uninterrupted voyage from a country of origin to Canada, making it nearly impossible for migrants from South Asia, who would usually stop on the coast of Japan or Hawaii, to immigrate.

In the case of the 1913 arrivals on the Panama Maru, Vancouver-based lawyer J. Edward Bird was hired on behalf of the South Asian community to defend the detained Sikh migrants in court. Because of a linguistic loophole in the law, it was ruled that the South Asian men would be admitted. Troubled by the verdict, government officials added more stringent restrictions to the Continuous Journey Regulation, augmenting an already rampant anti-immigrant, white supremacist sentiment.

Singh chartered the Komagata Maru, whose passengers included many farmers from Punjab in British India, British Malaya and Hong Kong, to the coast of Vancouver. Of the 376 passengers, 340 were Sikh, 24 were Muslim and 12 were Hindu, all British subjects claiming entry within the confines of the empire.

Upon the ship’s arrival in Vancouver, immigration officials surrounded the vessel and passengers were not allowed to disembark. For two months, the passengers were detained on board with little access to food or water. Finally, only 24 were admitted to Canada. The remaining 352 were sent back to India, diverting at Budge Budge, a village near Calcutta. There, the British authorities responded to the return with gunfire, suspicious that the passengers were Ghadarites, members of the Ghadar Party, a Sikh-led revolutionary anti-colonial group based in North America with the aim to free India from British rule.

On September 29, 1914, in what is now known as the Budge Budge Riot, at least 19 passengers were shot dead, and more than 200 were imprisoned. Singh managed to escape and lived in hiding until 1921. He then surrendered to the police and served a five-year sentence in prison.

Most photographic accounts of the Komagata Maru incident frame the passengers in relation to the physical contents of the carrier. In one photo, they gather by the main mast, heads huddled in conversation. There is uniformity in these visuals: the graceful, muted stature of the men, suited, turbans peaking softly, crushed blazers stationed like old armour.

“Photographs of the Komagata Maru are characterized by sameness,” writes Deepali Dewan in “We’ll Take Your Artifacts but Not Your People: The Komagata Maru in Canada’s South Asian Diasporic History.” Here, Dewan, the Dan Mishra curator of South Asian art and culture at the Royal Ontario Museum, studies the mark of plurality, the replication of the migrant, in archival photography.

Regarding Frank’s Sikh Men and Boy Onboard the Komagata Maru, a widely used photograph that documents the Komagata Maru incident, Dewan notes the still parade of South Asian men, mostly Sikh, assembled in dark suits on the ship’s deck. Singh stands with his young son, Balwant. He is further distinguished from the group by a greying beard and significantly lighter shade of outfit. In his book Undesirables: White Canada and the Komagata Maru, filmmaker and scholar Ali Kazimi describes Singh as “a compact man in his mid-fifties,” with a “keen sartorial sense [that] kept him looking sharp.”

Edmonton-based illustrator Gloria Ho takes Frank’s photograph as a starting point in Faces of the Komagata Maru (2014), a series of portraits that imagines the face of each passenger up close, using pastel hues in watercolour. Ho’s rendition of Singh is unlike both the original photograph and the unknown artist’s drawing: in Ho’s work, Singh is pristine, surrounded by white negative space, his beard unfurling like a tuft of cloud. Also noticeable is a deep black patka (inner under-turban), wrapped around his head and faded along the pleat.

Maybe the reading of a portrait rests on its limits, the frame removing anyone not seen inside of it. Ho’s images include two women—presumably the two married women who also formed part of the passenger list. One wears an off-white dupatta (scarf) filtered with rose-pink; another, her eyes closed as though in prayer, has a firozi (floral) olive-green and lavender–patterned scarf tied around her head.

Another way of remembering what Dewan calls “a diaspora that never happened” is by focusing on what is not depicted. The message of the photographic archive, always mediated through the photographer’s lens, routinely fails the subject being captured; it often either victimizes or demonizes the subject (or both).

The passengers of the Komagata Maru experience a similar fate in visual memory. Their images shape and design a tragedy—an “incident”—by virtue of what each capture fails to register: an ongoing wait. The photograph of each passenger unknowingly observes an absence, installing a barrier between what one imagines the incident to be and what it was. It feels right, then, to not be able to know a portrait completely. In a picture of Singh that essays a moment in detention, it feels arresting, even appropriate, to not know everything.

Aaditya Aggarwal is the programming coordinator at Toronto Reel Asian International Film Festival. He was the 2016 online editorial intern at Canadian Art.

This post is adapted from an article of the same title in the Fall 2017 issue of Canadian Art.