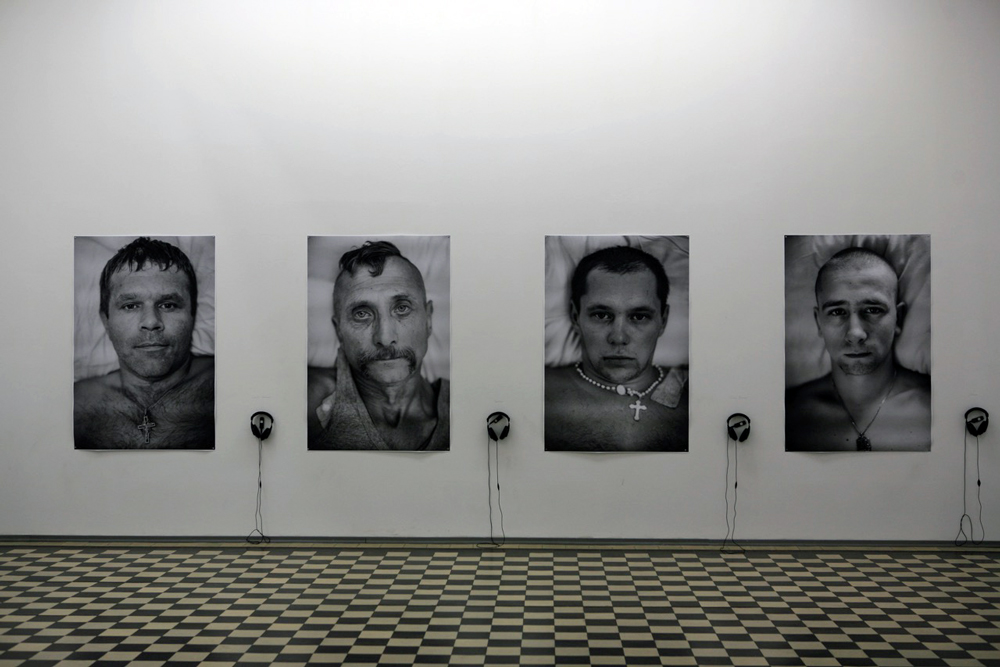 Ukrainian-Canadian artist Taras Polataiko has never backed away from contentious subjects or challenging presentations that threaten to place viewers ill at ease. His perennially engaging works demand our active participation. He asks us to engage with disturbing current issues, and then take a personal stance in response to his adroitly calculated provocations.

In August 2014, he travelled to the surgical department of Kiev’s Central Ukrainian Military Hospital. Polataiko recorded audio interviews with 11 Ukrainian soldiers wounded in the conflict with Russia and enlisted Pavlo Terekhov to assist him in photographing their portraits. The resulting installation features the photographs paired with their accompanying audio, and opened at the National Art Museum of Ukraine (NAMU) in a fundraising initiative to help wounded soldiers of the anti-terror operation that same month. It was subsequently shown elsewhere in Ukraine and across North America. What do these portraits induce us to feel?

They are uniform in scale and shape. All are frontal head-and-shoulders mug shots. Their subjects are expressionless, as if in a government-issue passport photo. All the men, mostly young, lie in their hospital beds staring directly up at us. Were their eyes not open, one could imagine that they lay in coffins. The selected subjects show no visible wounds or outward expressions of suffering. Many are bare chested; only a few wear medical gowns, and some have intravenous tubes intertwined with crucifixes and other regalia. However, it is not immediately apparent they are war patients.

Disarmingly, many of the depicted soldiers are just past boyhood, far too young to either take a life or reciprocally give their own. Headsets tether viewers uncomfortably close to the oversized visages, listening to their tales. We are left to speculate about the undisclosed damages they suffer, etched upon their haunting, blank facial expressions.

Rather than full colour, they are chronicled in black and white. Does this make the portraits appear more clinical, objective and detached? Or does it entice us to take one step back, further removed from lived reality?

Are these commendable people? Must we axiomatically empathize with their plight; accept at face value their personal accounts of their motives and struggles? The artist never expressly says so. Maybe he wants to leave it for each of us to decide. Each veteran recounts his experience buoyed by the encouragement of a cooperatively non-combative interviewer. Their version of events is uncontested, absent editorial inflection. Would Jon Stewart lob such slow-pitch softballs? Are these then unabashedly partisan portraits? Are we afforded even the slightest option of how we are expected to align? Are they war-bonds posters?

Such is the hypnotic, seductive power of art as opiate. We resist media accounts that purport to document “factual” evidence of important world affairs: we learn to be skeptical. However, for patriots channeling art, according to the website Voices of Ukraine, “Hope for the future rests on the shoulders of the heroes—such men as are in Taras Polataiko’s project.” NAMU curator Oksana Baryshnova declares, “Their heroism has no external attributes and is devoid of pathos.” Amid the telling of Denis’s story, interviewer Polataiko exclaims, “Glory to Ukraine!” to which Denis rejoins, “Glory to the heroes!”

We’ve come a long way from Woodstock. Once, Canada used to pride itself on being a peacekeeper, not a peacemaker; the Canadian Legion and War Amps preached against the madness and cruelty of war that victimized the individual. Canada now boasts the Highway of Heroes. Yet, when art champions war and aggrandizes its participants; when such art is sanctioned by the authority structures of the state; when websites encourage people to come see an art exhibition as a show of support for the troops; then to my mind, we have crossed the Rubicon. As the Bob Dylan song contends, “And you never ask questions when God’s on your side.”