Shary Boyle Turns Up the Volume at the Venice Biennale 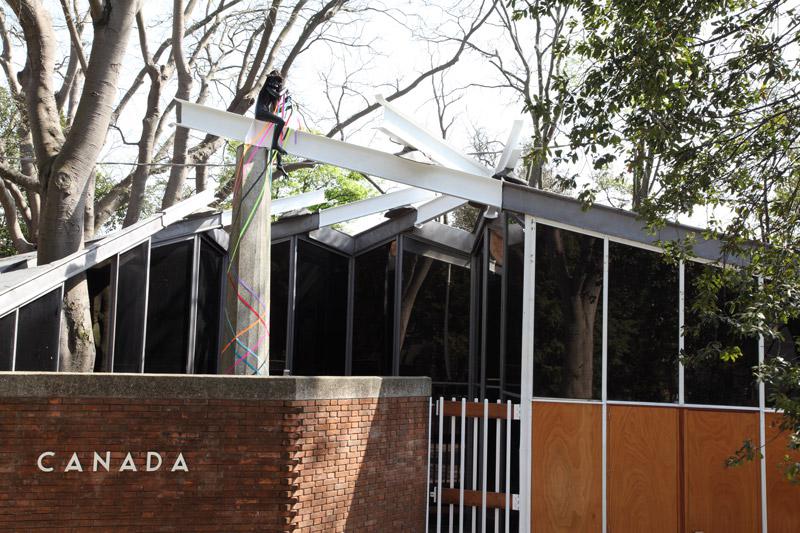 The slow, meditative exhibition, titled “Music for Silence,” served in many ways as a counterpoint to the bright busyness of the Biennale’s first big press and VIP day.

“I attempted to be as honest and generous and tender and vulnerable as I could in the hope that people would come feel that, receive it and open themselves up as well,” Boyle said in an interview at the pavilion. “Hopefully [they will] leave feeling a little bit more empowered, a little bit more human.”

Boyle said that part of her strategy responded specifically to the Venice context of “insane spectacle sensation.”

“We’re a very small pavilion. We’re centred in between two major colonial forces, [the French and British Pavilions]. We’re in the bushes; it’s human-scale architecture,” Boyle said. She regards the exhibition partly as a place “kind of to retreat to—to have some quiet, dark space to calm down in.”

A Tour Through the Exhibition

When viewers enter the darkened pavilion, the first work they encounter is The Widow, a bent porcelain figure who seems to hold a world on her back with a hand-woven net.

Next comes Onus Opus and Bridge and Chorus, both porcelain sculptures diplayed on vintage turntables. These two sculptures also show figures bearing up a world with the strength of their own bodies.

The Boyle text that Hutchison is interpreting, available in the exhibition brochure, suggests that the exhibition is “for the silenced / the unspoken / what we watch, witness and can’t name…for the indigenous who watch as the earth is sucked and torn / for the losers and freaks and the ones who don’t fit in and never will…for the girls who get shot in the head for going to school / for the activists.”

Boyle’s complete text (the above is just a selection) also pays homage to “all the artists who are not invited to show, whose work is not welcome here.”

Finally, viewers encounter the largest work in the show, The Cave Painter.

Created out of plaster, foam, wood, synthetic hair, and other materials, one of its elements is an aged mermaid-type creature nursing a baby in a cave or grotto. Another element consists of overhead projectors and stands a few feet away. When the projectors are activated, the grotto (pure white sans projection) becomes a riot of psychedelic colour and pattern as a small photocollage by Boyle is writ large on its surfaces.

Other installation elements include subtle constellation-like applications of crystals to the walls and the cloaking of one of the pavilion’s central skylights with a fishing net. All contribute to the show’s simultaneously subaquatic and celestial feel.

Connections to Past Work

Yet the exhibition’s most iconic piece is not found in the pavilion at all—it is located on top of it, outdoors.

This black, masked figure, titled Ophiodea, seems to be caught in the act of wrapping colourful ribbons around the pavilion’s largest concrete pillar.

This haunting yet celebratory figure seems to epitomize Boyle’s emphasis on the possibility of forging light out of darkness, power out of marginality, richness out of minutiae, and timeliness out of antiquated, analog techniques.

When asked about the connection to some of her older works—like the zines on schoolgirl bullies and sexual desire that were published in the book Witness My Shame—Boyle noted both differences and similarities in approach.

“I was really excited at a young age to share things that I knew people would identify with,” Boyle said. “I did absolutely believe that if I talked about these things that no one wanted to talk about, but also used humour and tenderness, that that would be really empowering.”

Boyle also noted that that early work grew out of the belief that being vulnerable invites others to be vulnerable and make connections.

“So it was a kind of [about a] generosity and a trust in the viewer, and it’s the exact same principle in this show,” Boyle said.

Boyle’s exhibition themes were further elucidated—albeit in a much noisier way—at the Canada-contingent party held later that evening at the Icelandic Pavilion in Venice’s artsy, studenty Dorsoduro neighbourhood.

There, Boyle invited two Canadian musical acts to play—first, Christine Fellows, with whom Boyle has collaborated for many years, and second, Vag Halen, an all-female hair-metal cover band.

“I’ve asked two bands that I feel like I want to share this opportunity with, because ‘Music for Silence’ is an exhibition-as-composition,” Boyle said.

“I see [the Venice exhibition] almost as a composition or score,” she explained, adding, “I also hope that people do listen [to the exhibition] differently—almost listen in a way they would listen to music or a different art form, a silent film or something. I’m trying to break the habits of contemporary art a little bit.”

Fellows played several songs on piano, mostly accompanied by cellist and occasionally other instruments and voices. The sweet, eccentric nature of her tunes seemed of a piece with some of Boyle’s own sensibilities.

When Vag Halen took the stage for two sets, another aspect of Boyle’s practice was reflected: reclamation of a fiercely embodied feminine-and-feminist power from a (yes, still) masculinist culture. Dressed in outfits ranging from jeans and T-shirts to thigh-high boots and Daisy Dukes, the band performed raucous, gender-bending versions of “Panama,” “Closer to the Heart” and “Immigrant Song,” among other tunes.

Both musical performances were enacted in a heartfelt way also characteristic of Boyle—as was the dancing that ensued.