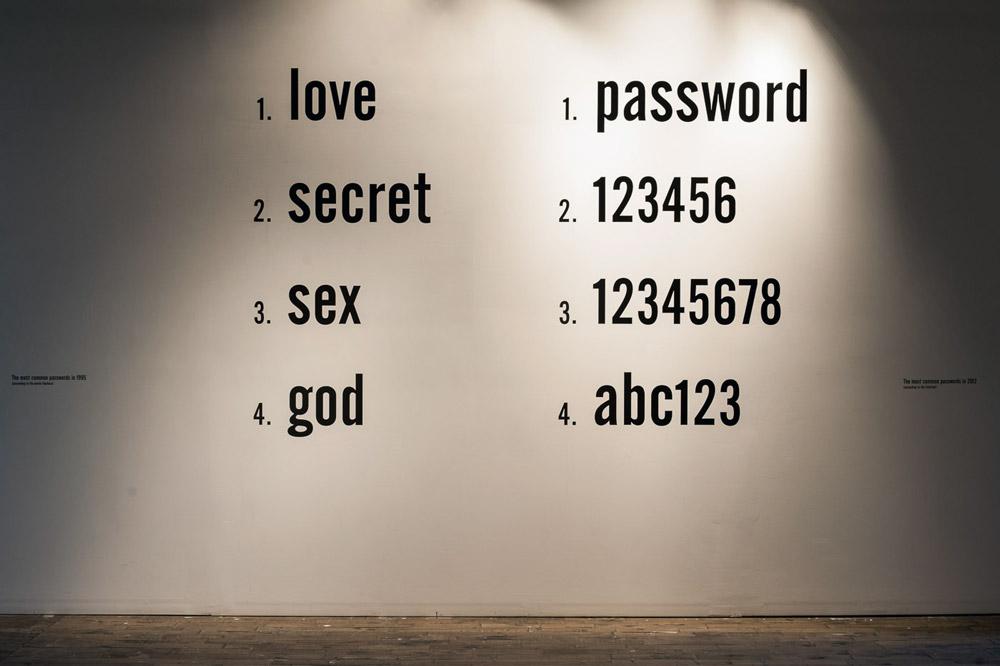 Installation view of “Anarchism Without Adjectives: On the Work of Christopher D'Arcangelo, 1975–1979” 2013 / photo Paul Litherland

1. “Laurent Grasso: Uraniborg” at the Musée d’art contemporain de Montréal
Laurent Grasso’s excellent solo exhibition at the Musée d’art contemporain de Montréal was one of the year’s most pleasant surprises for me, in part because I had never encountered the artist’s work before. In addition to being one of the more inventively installed shows I’ve ever seen at the MAC—a darkened labyrinth of hallways and chambers with cut-out windows and double-sided video projections—“Uraniborg” had something for everyone. There were pseudo-museological displays of artifacts both real and fabricated, including manuscript copies of some exceedingly rare books (like the Hypnerotomachia Poliphili, an “erotic architectural allegory” from 1499), along with Grasso’s ominous, haunting video works and fluorescent sculptures, and paintings from his truly stunning Studies Into the Past series, which painstakingly reproduce the style of Flemish and Italian masters of the 15th and 16th centuries, incorporating imagery from historic paintings while adding incongruous phenomena like floating islands, eclipses and aurora borealis. The theme of celestial observation served as an overarching metaphor, connecting historical techniques of vision to various forms of political power, from religious censorship (as in Galileo’s condemnation by the Vatican) to military surveillance. Though it was dense and complex, Grasso’s whimsical play with art and science, history and fiction kept “Uraniborg” focused on the pleasures of looking.

2. “*~._.:*jEnNiFeR X JeNniFeR*:.~*” at Eastern Bloc, Montreal
Full disclosure: this exhibition was co-curated by my partner and I moderated a panel discussion that accompanied it, so I can’t be entirely unbiased when I say it was among the most relevant, incisive and fun art shows I saw in Montreal this year. The worlds of new media, net art, and post-internet what-have-you tend to be dominated by either tech-obsessed formalism or a juvenile “bro” aesthetic that parallels the anarchic, all-for-the-lulz ethos of forums like 4Chan and Reddit. So it was very refreshing to see work by a couple of talented female artists—Jennifer Chan and Jennifer Cherniack—that addressed some of the messier political and personal topics that often get left out of the picture. Cherniack’s conceptually oriented video and text pieces looked back at the first incursions of the web into pop culture, in TV shows like Friends and movies like Hackers and The Net, while Chan explored how sexuality and intimacy are filtered through digital networks, particularly when it comes to being female, Asian and/or queer on the internet.

3. “Anarchism Without Adjectives: On the Work of Christopher D’Arcangelo, 1975–1979” at the Leonard and Bina Ellen Art Gallery, Montreal
For this exhibition, curators Dean Inkster and Sébastien Pluot (in collaboration with Michèle Thériault) set themselves the demanding task of doing justice to the under-appreciated career of Christopher D’Arcangelo. The artist, who ended his own life in 1979 at the age of only 24, produced a series of highly ephemeral works that can retrospectively be classified as “institutional critique”. This exhibition, however, featured no works by D’Arcangelo himself—which would be difficult anyway, since most of them exist only as documents of actions. Instead, it built a fragmentary portrait through projects by 10 different artists (some produced earlier and some created for this exhibit) that accompanied video interviews conducted by the curators. What emerged was a layered, polyvocal argument about the legacy of critical art since the 1970s. D’Arcangelo’s place and influence within that tradition are actually secondary to larger themes of how art enters into institutional memory. It was a forbiddingly didactic show, but unlike many such intellectually ambitious exhibitions, it provided a plurality of entry points for the curious viewer and rewarded sustained attention with a wealth of information and ideas—it really made me want to return, and to know more.

Saelan Twerdy is a Montreal-based freelance writer and a doctoral student in art history at McGill University. He is a regular contributor to Canadian Art and his writing has also appeared in C Magazine, Border Crossings, Blackflash, Magenta and The New Inquiry.