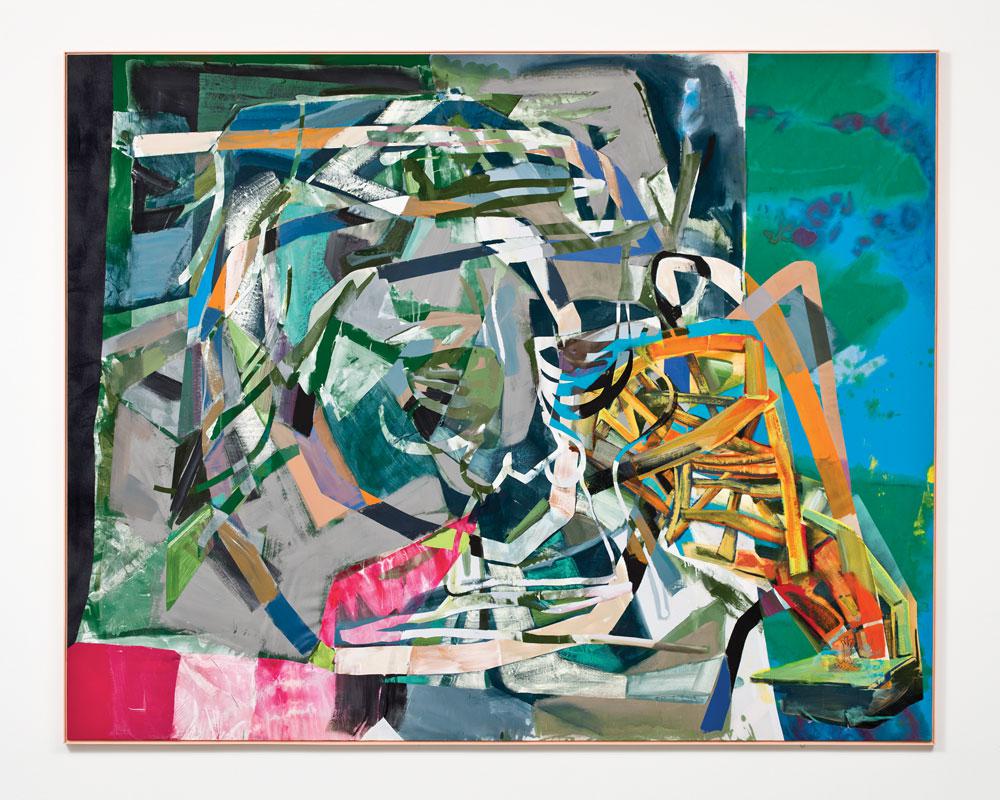 Last July, on a street in Culver City, where art galleries of white stone and glass—the look of modern LA—share street corners with gas stations and taquerias, Calgary-born artist Ryan Sluggett and I began what became a four-day art tour of Los Angeles. Welcomed inside the bright, lofty gallery spaces by smiling attendants in sandals, we wandered up to objects and looked. Sluggett, a painter and video artist, considered each with the same thoughtful gaze: Pop art collages, papier mâché masks, midcentury ceramics. At Honor Fraser we stepped around weathered, empty children’s chairs, the backbone of Alexis Smith’s installation Past Lives (2013). “They’re so sad,” said Sluggett, assessing the small furnishings. At an exhibition of graphic, abstract landscapes by Zach Harris at the skylit David Kordansky Gallery, he wondered aloud if the painter knew the work of Lawren Harris. The artist was sitting cross-legged on the floor and Sluggett walked over and asked him. Yes, Harris said, he thought he had heard of him. He had definitely heard of the Group of Seven. Nearby, at Blum and Poe, we saw a show of dark, earnest and contemplative stained-fabric canvases by the Japanese artist Koji Enokura that were, for Sluggett, “almost embarrassingly poetic.” We went downstairs. Peering at a group of sculptures by LA artist Julian Hoeber, white-haired and so tall that he had folded himself nearly in two just to bring the objects to eye level, was the pioneer conceptual artist John Baldessari. “Did you see who that was?” Sluggett asked once we were on the street. “He saw one of my shows once and said he liked it. I might as well die now. It’s never going to get any better than that.”

Sluggett was an emerging star while he was still at the Alberta College of Art and Design in Calgary, during which time he studied under Chris Cran and Eric Cameron. He moved to Los Angeles five years ago to attend UCLA, drawn to the faculty in the MFA program: Barbara Kruger, Charles Ray, Lari Pittman, Andrea Fraser—artists who have been at the forefront of American contemporary art since the 1980s. It was a program that gave him access to people he calls “some of the most extreme in the art world.” Asked why he did not show his work while he was attending the school, he said that he hadn’t needed to: “Every week I’d have a mega-artist come into my studio. That was the perfect audience already.” On graduating from UCLA he was picked up by Richard Telles Fine Art on Beverly Boulevard, whose artists include Richard Hawkins, Lisa Lapinski and Vancouver photographer Roy Arden. Sluggett’s second solo show at the gallery opens in the spring of 2014.

Sluggett looks like a California poster boy at first glance. He is shaggy-haired, blond, blue-eyed and tanned. He travels with a pool noodle and beach umbrella in the trunk of his Honda Civic and wears round eyeglasses that darken in the sun. He likes to walk his dog, an undersized golden retriever rescue named Harry—middle name Arp, for Hans—on the beach in Malibu. He speaks slowly, attaching qualifiers to his thoughts like “kind of,” “in a weird way” and “a bit.” (“I kind of work by making lots of drawings and letting them sit for a while in a pile.”) This can come across as West Coast mellowness, but after a few days I began to recognize it as caution, as though he were wary of committing to full resolution of ideas or, through some error of communication, of misrepresenting them.

At age 32, Sluggett finds himself facing a world of contradictions. He is situated in one of the world’s most important contemporary art scenes, yet is acutely aware of art historical tradition. He was raised in Calgary, yet is living in the land of American celebrity. Always thinking, he is also always partly joking. These oppositions reflect the two vying sides to his work: serious and flippant, earnest and playful. “Without irony I’d just want to kill myself,” he says.

In the last several years Sluggett has been making cacophonous paint collages on cheap, lurid fabrics, their cartoon figures abstracted by colour, line and the disjointed assembly of material. Eleven of them, most roughly eight feet tall and six feet wide, were hanging finished but unstretched on the walls of his Inglewood studio. Wearing a purple T-shirt and jeans, while Harry settled onto the floor by a fan and a long table full of paint tubes, Sluggett climbed up a ladder onto the roof to pull back the skylights. Two large squares of blue sky appeared in the ceiling, bringing light into the room. As helicopters passed by overhead, he showed me around.

“I used to use canvas all the time, but it started to seem weird to buy expensive fabric from the art store and then just put gesso [primer] on it. When I found this stuff”—poly poplin material he gets from the Fashion District—“I really liked it. I like how it’s cheap, how it looks artificial. I like how it stains weirdly. And it’s actually semi-transparent. You can see the stretcher. I like that, how you can see through it.”

The paintings start out as drawings—Sluggett is always drawing, he told me, flipping through cheap sketchbooks filled with figures done with a felt pen. They are formed through combined layers of paints, ink, dye and fabric. He cuts pieces away where they are not working and sews in replacements. The process of construction creates paintings that disrupt any eye looking for harmony, and any mind seeking easy associations, but they nonetheless seem natural, as though each part belongs, and always has belonged, with every other. “In a way, this more physical, material stuff gives me more distance from the work. I’m not trying to get it right, I’m not worried about getting it right, I’m just engaged with something that hopefully, through some alchemical process, will come together.”

Most of the paintings I saw in California were eventually destined for TrépanierBaer, the Calgary gallery that has represented Sluggett since he was 23, and where his recent solo show opened last September. The artist had built a three-dimensional maquette of the gallery in his studio to help him work out the hanging of the show. His paintings were pared down to thumbnail prints. Rear View Mirror Adjustment (2013) would hang in the gallery window. A rear-view mirror fills the centre of the frame, and a woman’s eye, rendered in four lines, is visible in the mirror’s left corner. A hand grips the mirror, seeming to fix it in position. In the background and foreground, colours compete for attention, but swaths of aquamarine and purple unify the picture. It is one of what the artist calls his “more obvious” paintings. The subject is not as difficult to ascertain as it is in, for example, Wig Slip (Male) (2013), a cartoon portrait of a man whose hairpiece has fallen from his head—a subject that I never would have found, without the artist’s direction, amidst the baby-pink and olive-green fabric, grey stains and amorphous shapes.

“I like paintings that don’t just follow the figure directly,” Sluggett says. “It’s almost like being really respectful of painting—to be more arbitrary toward the figure and more concerned with the relationship of the colours, the shapes that are intersecting, and not only those that are attached to the figure. A lot of people look at these and think they’re abstract, because I guess that’s what abstraction does. It doesn’t have a figure that it follows.”

Another painting in the studio, the triptych Apples and Oranges (2013), was a commission by the Ivey Business School in London, Ontario, where it was installed in September. Sluggett received no limits or guidelines other than to make something that would fit the wall space. The resultant work presents a clash of personalities, ideas and interests represented by opposing colours—yellow on the left, blue on the right. They collide in the central frame in a burst of orange. He began it around the time of the US presidential election in 2012. It is intensely complex and difficult to decipher on a literal level, though less dense than his other works with their singular, central figures. The scale of the work allowed for bigger empty spaces. Sluggett pointed forms out to me, moving through the work from left to right: a moustache, a dollar sign, a glass of orange juice, a hairy chest, a setting sun. “Oh, yeah; oh, yeah,” I intoned, trying to follow.

Sluggett does not see himself as an abstract painter (he also does not see Jackson Pollock as an entirely abstract painter, either, though he admits that that is an unpopular view). To him, his work—structured as it often is around one large figure—is classical. Such a confession vaguely embarrasses him. “I like something that is a little bit challenging, a little bit off, but I’m not a bad boy. I’m trying to make paintings that feel slow, sustained, that gradually grow into things, rather than just trying to test the limits of art through ugliness or something. I think that’s the classical side of it, too. I’ve always been interested in looking at paintings for a long time and seeing how they change—good ones, like Matisse’s. You can look at them for a long time and they keep changing. It seems related to staying alive,” he says. “Staying present.”

One day, as we toured the permanent collection at the Los Angeles County Museum of Art, Sluggett asked me if I wanted to see his favourite painting. I followed him upstairs to a quiet, wood-panelled room that seemed little connected to the breezy, mall-like entrance plaza below. He stopped in front of a vast canvas by the 16th-century Venetian Mannerist Paolo Caliari Veronese, a painting dated 1557 and titled Allegory of Navigation with a Cross-Staff: Averroës. It showed a male figure in a shining green and pink tunic and white cape, with pale boots adorned with rams’ heads and a wooden staff gripped fiercely against his thigh. The figure’s whole body was angled heavenward. He looked like he might ascend.

The drama was outrageous. Laughing, we admired the boots. But the dynamism and emotion were real and affecting, and they appealed to Sluggett. “I want my paintings to feel like they’re doing something,” he had told me earlier, in his studio. “I don’t like paintings that are all style and no meaning. I like it when it feels like underneath it all, there is something that’s been thought about. Even if you don’t see it.”

This is an article from the Winter 2014 issue of Canadian Art. To read more from this issue, visit its table of contents. To read the entire issue, purchase a copy on newsstands, the App Store or Zinio until March 14.