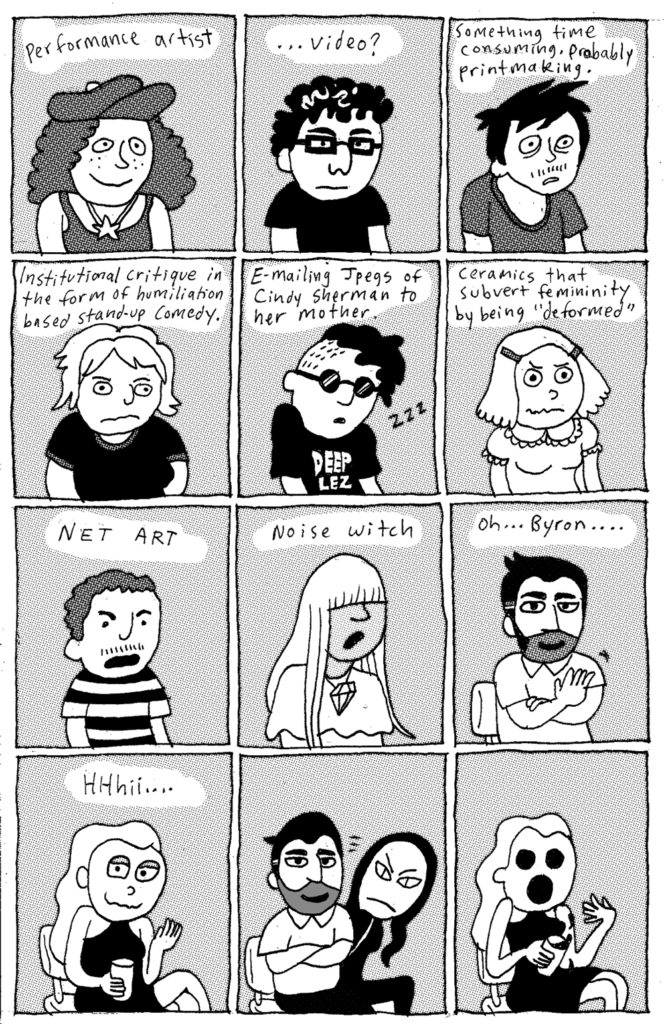 Types of artists, from Wendy by Walter Scott.

Since it opened in June, 8-11 has hosted exhibitions, workshops, readings, reading groups, screenings, performances, astrological-chart readings, concerts, taxidermy sessions, photo shoots, bonfires and feminist whiskey-drinking parties, and has quickly cemented itself as a brave new locus for experimental art in Toronto. The artist-run centre’s frequently Instagrammed sign, which is styled after 7-Eleven’s, attracts much attention and confused speculation from people passing by, and gives a clue as to the kind of out-of-the-ordinary happenings inside. It held its first exhibition in September and has put on many more since—my personal favourite was Bridget Moser’s Tender Offer Part 1, a site-specific performance that took place nightly from (funnily enough) October 8 to 11.

The gallery relies primarily on donations for funding, and its modest coffers are bolstered by the sale of multiples, branded gift-shop items and membership packages. I get the sense, however, that the gallery is largely powered by the silly, gleeful excitement of its founders—membership benefits include, at the lower tiers, “access to chips” and “a Haircut!” and top-tier members are designated as Dedicated Art Donors (DADs) or Grand Officiate Donors (GODs). The jokey, irreverent tone the gallery adopts in their communications might prompt some eye-rolls, but it would be a mistake to read this as a lack of seriousness. This is a passionate, political and committed group who are keen to transmit that they are “not neutral. Inclusivity is very important.” Their co-opting of instantly recognizable branding in promoting their own demonstrates thrifty and efficient entrepreneurial savvy, and their energetic enthusiasm is catching.

Curator Xenia Benivolski filled me in on what’s coming up in 2015, and it’s a strong list of young Canadian talent: Laurie Kang will be showing work off-site as part of Villa Toronto in mid-January, and the gallery is in talks with Maryse Lariviere, Katie Bethune-Leamen, Karen Kraven, Jennifer Rose Sciarrino, Zachary Davis, Walter Scott and “some other ppl” to fill subsequent exhibition slots. Oh, and they’re also installing a sauna in their backyard. Conveniently for me, it takes less than one minute to walk from the Canadian Art office to 8-11, so I’m looking forward to visiting often.

Things that make us laugh are good, but things that make us laugh at ourselves are better. This is why everyone in the Canadian art world needs a copy of Wendy by Walter Scott—it does both. The comic is an astute and biting satire of the arts scene in Canada, told by a cast of disarmingly relatable characters. It’s also just really, really funny. The book, published in November, anthologizes three comics (including one new story) based on the adventures of its eponymous main character, a wide-eyed and expectant 20-something white girl with artistic aspirations, self-destructive tendencies and an endless rotation of little black outfits.

We follow Wendy as she stumbles through a daunting post-BFA landscape, cringing as she types submission proposals in dreadful artspeak; wincing as she goes to vernissages and spends her time outside smoking; and grimacing as she competes against precocious teen bloggers in interviews for vaguely defined, low-paying jobs. She fills in the gaps between her attempts at becoming a Serious Artist with drunken hookups with predatory art bros; MDMA-fuelled after-parties; and Netflix marathons while scarfing down Pringles. Wendy is like a Generation-Y Cathy (“Ack!”) and can also very easily be read as an explication of Tiqqun’s Young-Girl. She is on her way to figuring out who she really is, and as a reader, all I want is to see her succeed.

Scott readily admits that many of Wendy’s adventures are cribbed from the experiences he and his friends had while living in Montreal (I graduated from Concordia the same year that he did but, luckily, we didn’t know each other). Even if Scott’s story doesn’t exactly mirror your own, there are winking references that will be all too familiar if you participate in any area of the Canadian art scene, and the experience of seeing yourself satirized can in fact be an oddly satisfying and vindicating one. Scott has often referred to Wendy as his “drag avatar,” and indeed the other characters in the comic comprise performative versions (caricatures, really) of Scott, whose identity is informed by being queer, Native and male. As well as drawing Wendy’s adventures, he maintains his own art practice, and has most recently shown work in Vancouver at Macaulay & Co. Fine Art and the Western Front. He also recently completed a residency at the Banff Centre—Wendy’s trajectory often follows Scott’s, and she recently attended a residency at Flojo Island. Scott has just made the move to Toronto, so when his next volume comes out, turn the pages gingerly—you may find yourself in them.

3. “Taking [a] part” at Mercer Union in Toronto

One show that really stuck out in my mind from this year was Georgina Jackson’s “Taking [a] part,” a five-week series of group exhibitions that took place in the early summer. Jackson is still relatively new to Canada, and she has made it clear that she wants to get to know local practicing artists on a personal level. I know from hearsay (full disclosure: my partner, Jeremy Jansen, was one of the artists included in this exhibition) that she regularly conducts studio visits with local artists, and I saw this exhibition as her deliberate effort to contextualize the work she has seen during these visits, as well as a welcoming invitation to artists who may not be on her radar to get involved with the artist-run centre where she directs exhibitions and publications.

“Taking [a] part” set a refreshing change of pace from the usual show-rotation time at Mercer. Jackson asked five local contemporary artists to participate, and asked each of them to select two fellow artists or collectives to join them in a sort of rapid-fire round-robin exhibition format. In accordance with a sequence set out by Jackson, each group took turns exhibiting their works in the smaller back gallery during the (approximately) weeklong spurt allotted to them. Once time was up and the next group was due to move in, the preceding group moved their works into the larger front room. Before each switch, there was a brief pause where Jackson would host an “artist talk and social,” inviting the new group to come in and introduce their show to an audience, who gamely took part by putting forth questions and comments. The atmosphere was that of an informal social gathering. Each round heralded a rearrangement of the main space to allow for new works, with space becoming more limited as the weeks passed.

Shane Krepakevich, Sarah Nasby and VSVSVS were the first in the gallery. It was slightly off-putting to walk through Mercer’s large, empty front room to find their works, anchored in the middle by VSVSVS’s large table on wheels, set up in the smaller back gallery. This analogy has been used elsewhere, but it did feel like being the first to arrive at a party where you don’t really know anyone else. Part Two saw Sylvie Bélanger, Nicole Jolicoeur and Ginette Legaré enter the space. Laura McCoy, Brian Rideout and Jillian Kay Ross came in for Part Three, and by then the gallery started to feel comfortably full. They were followed by Cecilia Berkovic, Jean-Paul Kelly and Logan MacDonald in Part Four. In the fifth and final round, Jesse Harris, Jeremy Jansen and Niall McClelland took over the back room. Their works were not moved into the front room, and the show closed with this arrangement.

Jackson’s aim was to facilitate conversation among artists, artist-curators, artworks and audiences by inviting them all to take part, by simply going to the exhibition, and to take apart, by engaging in deconstructing (physically and via discussions) the changing landscape of the gallery space and interactions between the artworks. Without context, the exhibition as a whole might have appeared a little disjointed, but when viewed as an experiment in engaging a large community in conversation, it was undeniably successful.