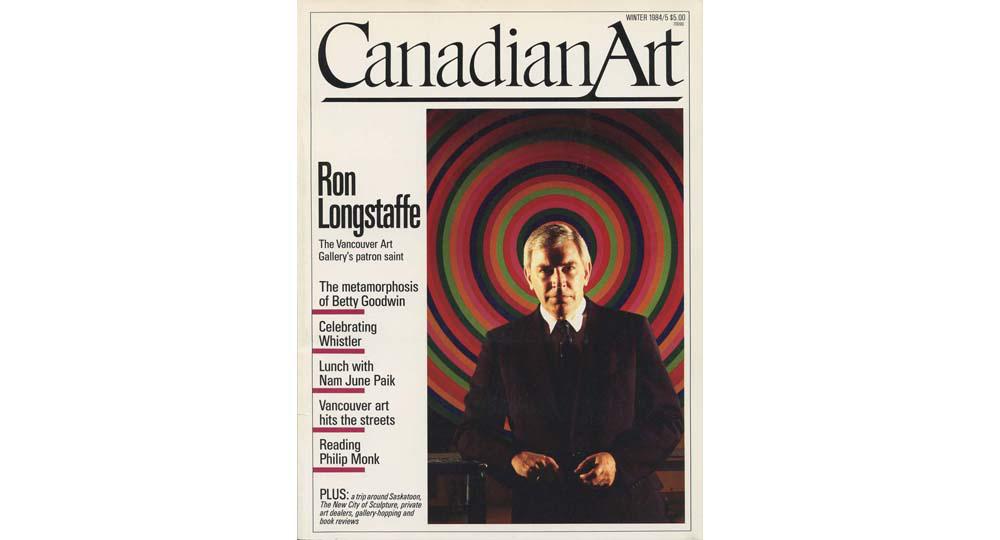 In 1979, John Ronald Longstaffe gave the Vancouver Art Gallery a virtually complete collection of works by mid-20th-century Quebec painters, including the VAG’s first three Alfred Pellans. The gift was valued at “in excess of $100,000” by Luke Rombout, the gallery’s director at the time, who announced that this windfall was only the first instalment of five annual donations from the Longstaffe collection—a donation conservatively valued at $500,000.

In 1980, Longstaffe gave the gallery nearly 40 contemporary Canadian works (including three each by Jack Bush, Claude Breeze and Jean McEwen) plus a number of sculptures. Representing two-thirds of all donations to the gallery for that year, these works were the basis for its highly acclaimed Recent Acquisitions show of the same year. Longstaffe’s 1981 donation comprised international graphics valued at $200,000: 71 pieces, including 12 Gene Davis silkscreens, 10 Richard Hamiltons and 17 David Hockneys. In 1982 his 70 donations included four Gordon Smiths, five Takao Tanabes and 17 Varsley prints. Last year he contributed 14 Frank Stellas, three Christopher Pratts, six Roy Lichtenstein prints, three B.C. Binnings and three Jack Shadbolts, one of which was the 15-drawing Hornby Suite. Over the five years, Longstaffe’s largesse accounted for 237 of the gallery’s 407 acquisitions. His donation is now valued at $1 million.

So begins the cover story for the Winter 1984 issue of Canadian Art. To keep reading, view a PDF of the entire article.