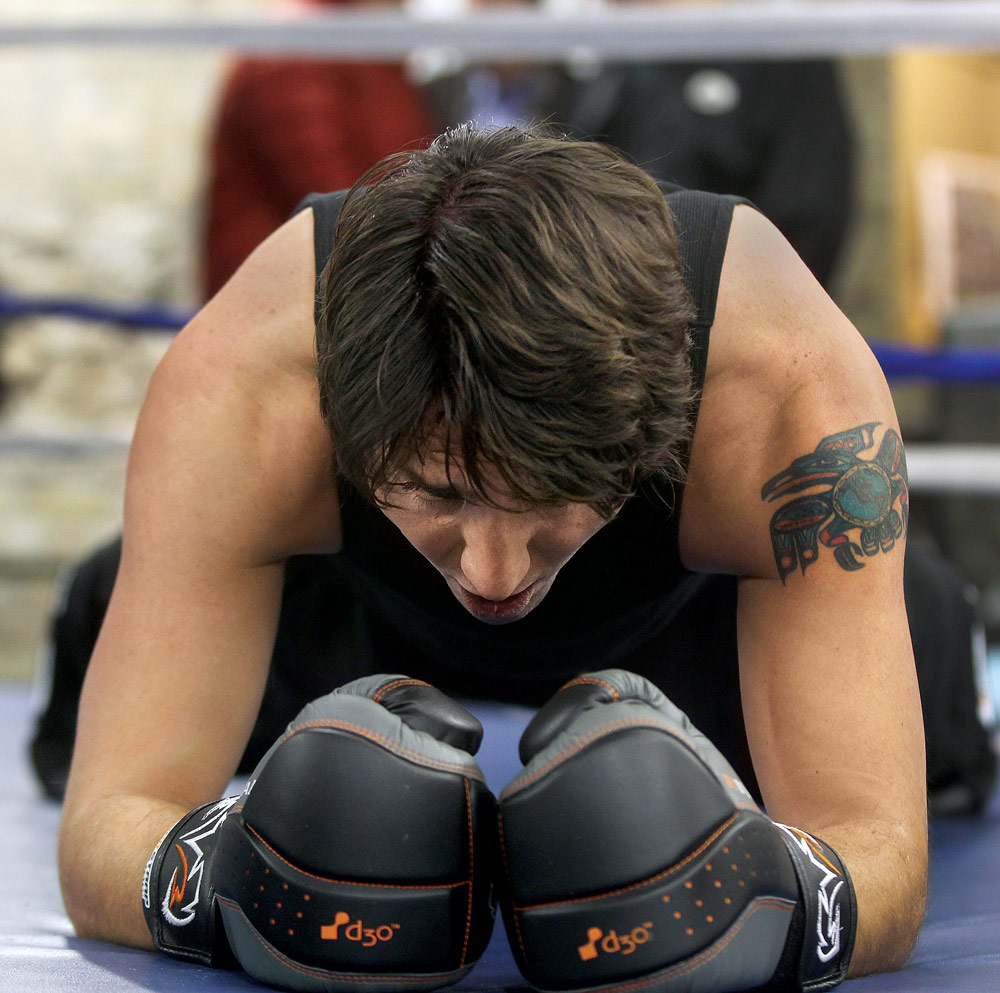 In 1985, I collaborated on a painting with my daughter, Sara, called Raven Bringing Light to the World. We sold the print and all the money went toward Sara’s fare for a trip she took to the USSR. She was 12 at the time. I drew a circle, and she did the inside: a small yellow dot for the sun, a crescent moon and lots of little happy faces. I did the outside, the Raven.

I heard that when Justin Trudeau got his tattoo, which was inspired by my artwork, he already had the globe on his shoulder, and that replaced Sara’s part of the design. I talked with her, and she said she was okay with it—I think we were both more humoured than upset.

I’m always surprised when one of my designs shows up on someone as a tattoo, but I don’t feel slighted. I treat it more like a compliment, but I still appreciate it when people ask permission.

To me, cultural appropriation is where we’re not recognized for our contributions. I remember as a teenager in high school, I would look through the Canadian social-studies book to read about the Haida, and I think there might have been one paragraph. The rest was about conquering the Natives. It really left an emptiness in me.

It wasn’t until years later that I started to relearn my history. Through hosting the potlatch with my grandmother as a mentor, I realized there’s more to art than just images. Our images carry the history of our past.

I chose Raven because Sara’s crest is a Raven. Raven is also a cultural hero for the Northwest Coast peoples. Many of our stories are channelled through Raven, many of our lessons, many of our laws.

The story of Raven Bringing Light to the World is that there was a period of darkness, and Raven knew about a chief who owned the sun, moon and stars. The chief was very protective, so the Raven had to find a way to be devious. He disguised himself and then carried the moon and sun through the smoke hole in the chief’s house, which turned him black, and placed them where they are now.

There certainly was a dark period in Canadian history, with Harper, who was muting not only First Nations people, but also scientists. I don’t understand what that was all for.

For the Haida people, being tattooed is a way of reaffirming identity and belonging to a clan. Charles Edenshaw, my grandmother’s father, was tattooed all over his body. My grandmother, who had the authority to give names and adoptions because of her age and knowledge, honoured Pierre Trudeau in 1976 with a Haida name, Kihl gulaans, which translates to “his voice is good as gold.”

Adoptions are a way of showing our generosity. We’re continually giving. Eventually, Canada will honour its promises and give back.

As told to Rosie Prata.

Robert Davidson, a Northwest Coast artist of Haida descent, is a master carver of totem poles and masks and works in a variety of other media as a printmaker, painter and jeweller. His work is in the collections of the National Gallery of Canada, the Vancouver Art Gallery and the Canadian Museum of History.

This post is adapted from an article in the Spring 2016 issue of Canadian Art. To read more from this issue, pick up a copy on newsstands until June 14—or to get each issue delivered before it hits newsstands, subscribe now.