Aliya Pabani reflects on the recent Primary Colours gathering, which brought together artists, academics and critics of colour from across the country 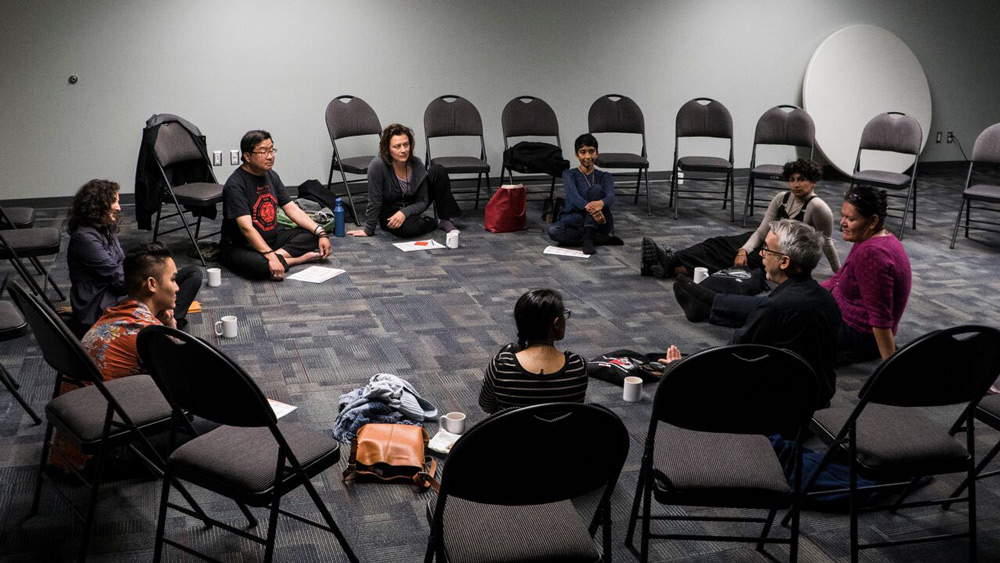 Participants in a Primary Colours gathering breakout session, facilitated by Walter Quan in response to the question “Where do artistic practices come from?” Photo courtesy of Primary Colours/Couleurs primaires (PC/Cp).

When I ran into Aliya Pabani at an art event in Toronto several weeks ago, she described a recent visit to the Primary Colours gathering on Vancouver Island. As part of a larger project spanning 2016 to 2018, Chris Creighton-Kelly and France Trépanier organized this three-day gathering at the Songhees Wellness Centre, on Lekwungen territories near Victoria, in an attempt to reimagine the typical art symposium. There were more than one hundred attendees, including Skawennati, Nadia Myre, Sylvia Hamilton, Andrea Fatona, David Garneau, Camille Turner, and other BIPOC artists, critics and academics. I asked Aliya if she would share her account of the gathering. We spoke for nearly an hour over the phone, and she recounted her impressions of the gathering. The following is an edited version of Aliya’s transcribed comments.—Yaniya Lee, associate editor

Chris Creighton-Kelly and France Trépanier, who put on the gathering, articulated that one of the main reasons for doing it was to bring artists of colour and academics and critics from across the country together to start conversations. They have had a lot of experience as consultants with Canadian arts councils and their message was that fighting for inclusiveness and representation within structures—something they had been doing for a very long time—was over. We are already in it. It’s flawed to say, “We need to be included” because we are what makes the Canadian art scene compelling. The conference was about attempting to reimagine Indigenous art practices at the centre of the Canadian art world, and to do that in a way that prioritizes Indigenous, Black and POC artists’ voices in the process.

The gathering was hosted by the Lekwungen people, on their territories. For the welcoming ceremonies, a collection of stones was brought inside. We were asked to choose one we felt compelled by in some way, and to write down what we imagined we could contribute to this space, then either draw it or write it on the stone—imbue the stone with that intention. We each wrapped our stone in cloth and twine and put them in the centre of the space. That collection of intentions was there throughout the entire gathering.

After the welcoming ceremonies, there were breakout sessions. The idea was that as a participant, you were also a contributor, so everyone would be guiding at least one session. Chris and France said the idea behind doing sessions and the gathering in this way—where they don’t give that much guidance—is that everyone had been selected because they already held the knowledge that they needed in order to contribute.

There were also specific roundtable discussions that were on a certain theme. The themes were pretty open, like, “How does an artist create?” which seemed almost comically vague at first. I changed my mind after: the themes were so open that they allowed people I might not have heard about until the gathering to really articulate how to make meaning of the topic.

I’m not really a conference-goer. Because of that, when I’ve been to them in the past I’ve felt outside of them in a way. The last thing that I witnessed before Primary Colours was the This Is Paradise: Art and Artists in Toronto Conference. It was useful to understanding art histories in Toronto, but I felt like not only were there too few people of colour present at the conference, but that it was prohibitively expensive for younger artists who weren’t students. [The regular rates for single day or full weekend were $40 or $100, and $25 or $70 for students.] There also didn’t seem to be an attempt to reach out to artists under 35 to be present. The thing about these attempts to acknowledge specific histories, I find, is that the last step of connecting to young artists who are practicing today is often missing.

In the end, as we were leaving the Primary Colours gathering, everyone took one of those stones, just one, that wasn’t theirs, and the idea was that you bring that [intention] back with you. I like that ritual makes you really intentional in a space, and makes you think about your relationship to other people. On a very surface level, it makes you really aware of yourself in relation to other people. You understand that you are connected to people, and that makes you more kind and more generous and more open. And you have a responsibility in some way: you are not just an observer, you have a role to play. When I see this stone, which is on my desk now, I am reminded of that experience.

One of the things that I found really significant—and that I would like more gatherings to do—was that there was this process of determining four or five specific people in the group that would be named as witnesses. This ritual was in accordance with Lekwungen tradition, and introduced at the gathering by Lekwungen artist Bradley Dick. Basically, the witnesses’ role was to be present and witness the kinds of discussions that were going on. At the end of the gathering, they were supposed to fuse all of that into some thoughts that they had, some kind of overarching meaning that they had made from their experience in witnessing all the work that was being done. The witnesses first shared their insights during the closing ceremony, and then their role was to go back to their community and share that knowledge, or that work, with the community that they came from.

Aliya Pabani is a multidisciplinary artist and host of CANADALAND’s arts and culture podcast, The Imposter.