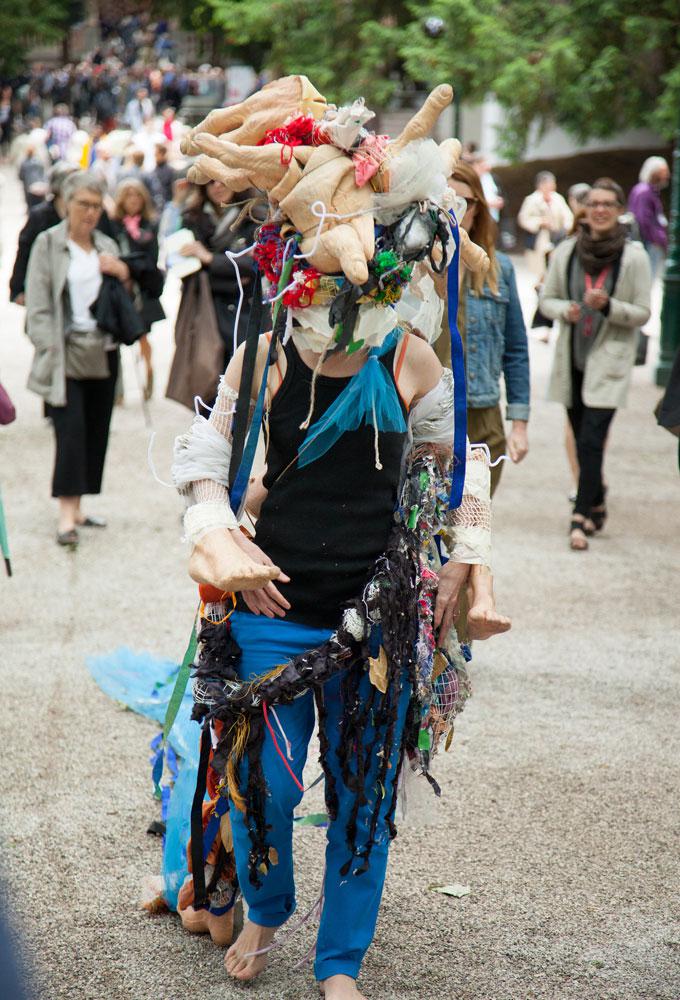 When a massive cruise ship sails into Canale di San Marco, heads turn, and there is a chorus of oohs and aahs.

But yesterday, a few Venetians found themselves exclaiming over a much smaller craft—a gondola bearing Montreal artist Raphaëlle de Groot in mid-performance. Some of them said they had never seen anything like it before.

The performance—an unofficial Biennale event produced by Galerie de l’UQÀM as what its director Louise Déry called an “improvised pavilion”—began at 2 p.m. in Venice’s Giardini, on a bench in front of the British Pavilion.

There, de Groot began removing materials from large bags, adding fabric, paper and other objects gradually to her body. First to be covered was her head, so that she was blinded for most of the performance. Then large rubber hands were affixed to her head as well, and fake feet taped to her arms, among other items. A garland of compressed fabrics and other detritus was also attached, and a long, blue train of gauze and ribbons.

Eventually, de Groot stood up and, with bare feet, began to walk through the gravel paths of the Giardini. Members of her support team—approximately 10 in all including Déry, UQÀM PR rep Maude Béland, artist Gwenaël Bélanger on photo-documentation duty and de Groot’s mother and husband, among others—occasionally steered her away from obstacles.

De Groot and her team exited the Giardini, and she boarded a gondola on the Rio di San Giuseppe that conveyed her (largely through the Castello district’s aqueous and less touristed back alleys) to Campo dell’Arsenale, where the performance ended around 4:30 p.m.

Reaction from the VIP and press-preview crowd was mixed.

Some onlookers seemed charmed by the performance, stopping to smile and snap pictures. One man took her hand and guided her for a while, while some children reached out to touch her train. At one point, a TV crew attempted to interview her, but de Groot refused.

Other onlookers—particularly a trio on a bench that de Groot bumped into and blindly groped—had a much less positive response, attempting to push the artist away with their feet and hands.

“I’m sitting here with my friends, trying to have a coffee,” one of these onlookers explained. “I don’t want to be touched by strangers. Art is not an excuse to do anything you want.”

In an interview today, de Groot responded to such reactions with acceptance.

“My relationship to what I was doing was not in terms of trying to please anybody,” de Groot said. “So I am very comfortable with negative reactions, I think they are part of life.”

She added, “I certainly did not think that I would have the right to do anything I want. But as an artist, I’m claiming something, I’m doing something, and it creates a situation that everybody might not be comfortable with. And that’s fine.”

Winner of the $50,000 Sobey Art Award last year, De Groot has become known for performances that are often indeterminate and open-ended.

This openness to change came in handy in yesterday when the gondolier hired for the performance informed de Groot’s team that the waters of the vast Canale di San Marco were too choppy for de Groot’s original plan to embark and travel away on the watercraft there.

“Part of [the work of an artist], for me, is rooted in a reflection on the basics of art, and art as being a place for invention—in a way, confronting the unknown,” de Groot says. “You put yourself in a position of experimenting with something or producing something” without knowing what the end product will be, she explains.

“When you search, you don’t know what you’re going to find,” de Groot says. “That’s the thing I’m holding onto [in my performances].”

Granted, there was some advance planning involved, with de Groot walking the route and locating possible reference points in the days before the performance. She also tested out standing in the gondola blindfolded.

Also, during the performance itself, her supporters sometimes stepped in to assist her, putting a jacket on her briefly and holding umbrellas when it started to rain.

De Groot, too, is fine with this group aspect of the performance.

“I think artists don’t exist alone. I think that’s an illusion,” she says. “I think art and what artists do exists because there are people with and around them.”

Indeed, much of the impetus for the project actually came from Déry.

“Something like this has been in my mind since 2007 or 2008,” Déry said. She says that around that time, she saw a man in a velvet cape standing in a traghetto (large commuter gondola) and the image of someone doing a performance of that type—playing off art historical images of both the gondolier and the Venetian masquerade—stayed with her.

At that time, Déry knew of de Groot’s work but said, “I had to look and watch and see if she could do it.”

After Déry successfully advocated for de Groot’s Sobey Art Award win in November 2012 (Déry was the Quebec jury member that year), she set the plan in motion, obtaining a $30,000 grant from the Conseil des arts et lettres du Québec for the Venice project. (Some of the other funding came from the gallery itself and a print-sales fundraiser.)

Déry says she hopes to do other projects under the Galerie de l’UQÀM/CALQ umbrella at other biennales, and possibly again at Venice, in the future.