Like the Quebec Triennial it replaced, the Biennale de Montréal was a star-making machine for Quebec artists; here are four who stood out. 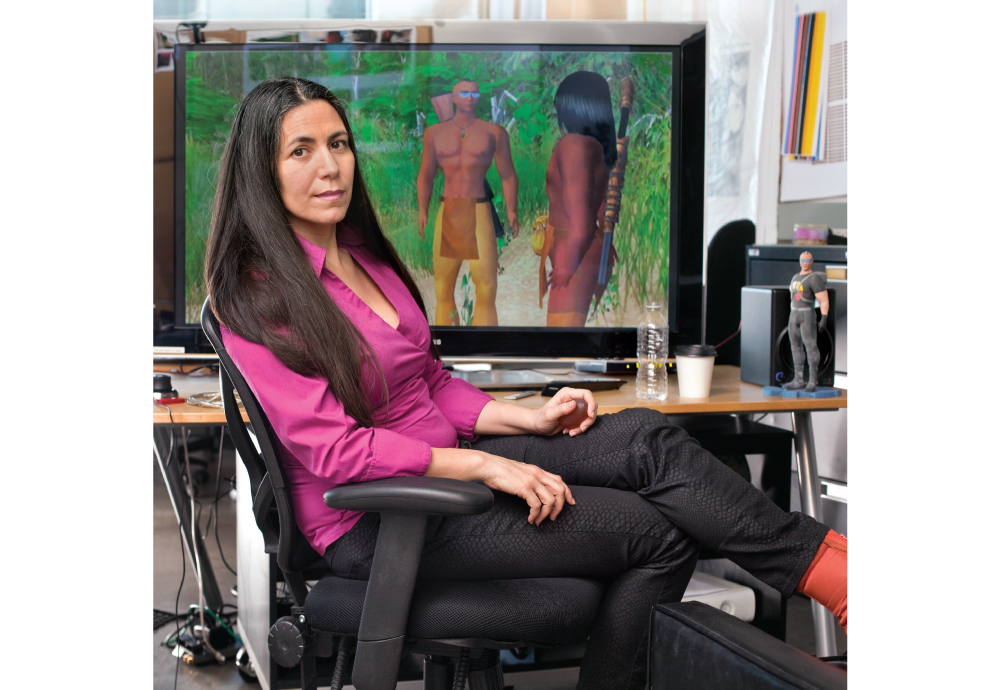 This is an article from the Spring 2015 issue of Canadian Art. To read more from this issue, visit its table of contents. To read the entire issue, pick up a copy on newsstands until June 14.

Like the Quebec Triennial it replaces, the Biennale de Montréal promises to be a star-making machine for Quebec artists. In the first edition of the new biennial, talent was everywhere. In these portraits by photographer Roger Lemoyne, we focus on four artists who stood out.

Montreal-based artist Skawennati (Tricia Fragnito) is first among them. With the showing of her sci-fi video series TimeTraveller™ (2008–13), she steps to the forefront of a group of smart, engaged artists currently increasing the visibility of Aboriginal issues in their art. In the future she might well occupy the Canada Pavilion in Venice and increase that visibility for international audiences.

It took Nicolas Baier 15 minutes to find eternity. The Montreal artist had just finished installing a solo show in Toronto in 2010 when he decided to take a walk. A few blocks later, the cursive sign above a barbershop caught his eye and the idea for Eternity (2014) struck. At 10-feet-high, 6-feet-wide and 25-feet-long, the sheer scale of Baier’s mirrored-steel sculpture (which won the viewers’ choice award at the Biennale) is both imposing and magnetic; its towering, curtain-like walls reflect a distorted desire for the infinite. From above, it is the Eternity barbershop sign remade, its unseen, open script a wry reminder of an existential continuum just beyond reach.

There’s something unnervingly sinister in Nicolas Grenier’s Promised Land Template (2014). The work’s looming wooden exterior dominated one of the Biennale’s central galleries with a mysterious, monolithic weight. On one side, a doorway leads into a small interior cell. A potted cactus sits on the tiled floor. A pair of paintings hang lit by a false skylight, their desert ochres, pinks and blues mapped by texts that hint at utopian dreams. It’s another world; calm, eerie, claustrophobic. For Grenier, who splits time between Montreal and Los Angeles, it’s a metaphor for the failed systems of integration and immigration, a transitory space that at once promises and denies hope.

A Union Jack flying next to a British seaside pavilion is not what one usually expects from Emmanuelle Léonard, but in Postcard from Bexhill-on-Sea (2014), she brings her remarkable sensitivity to sites and subjects to make one of the key works at the Biennale de Montréal. Framed by the show’s theme, “L’avenir (looking forward),” Léonard’s video, with its far-off horizons of sea and sky, captures British seniors offering ideas of what the future holds in poignant counterpoint to their diminishing years. La Providence (2014) makes a companion piece with aged Grey Nuns in modest Montreal apartments remembering youthful missionary work. In both, time has no boundary.