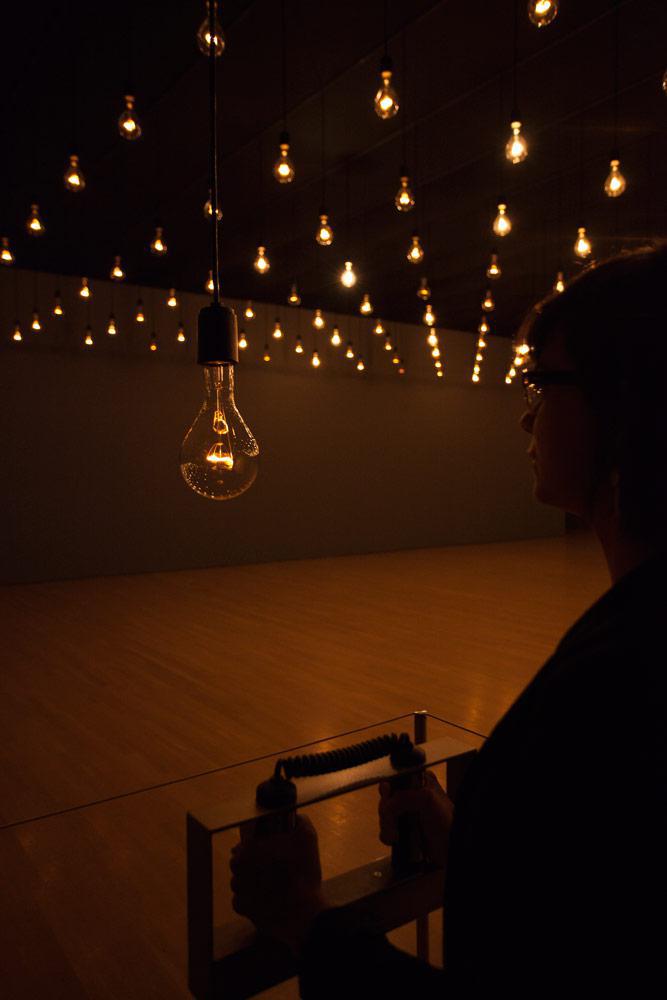 Rafael Lozano-Hemmer’s Pulse Room (2006) harmoniously combines an interaction-based art practice with a minimalist sensibility in a rumination on mortality. Recently donated to the Musée d’art contemporain de Montréal, the sprawling installation is currently on view alongside the exhibition “The Grace of a Gesture,” a survey of 50 years of gifts to the museum. Notably, Lozano-Hemmer’s work was on view at the 52nd Venice Biennale in 2007, where the former Montreal artist represented Mexico in the country’s first official pavilion exhibition.

The 300 suspended light bulbs that comprise the work create a pulsating, ever-changing fabric of cardiac rhythms. Visitors to the exhibition are invited to clasp a sensor that records their heartbeat; this vital data is then translated into a flickering light pattern that subsequently and cyclically ignites the filament of a single light bulb, poetically mirroring the electric impulses that compel a heart to beat. In its entirety, Pulse Room is an asynchronous collection of hundreds of donated heartbeats that palpitate and move as though constituting a single, yet composite, organism.

While contributing a heartbeat seems an intimate gesture—one that might tell of an excited, tired or even broken heart—the installation’s relationship to intimacy is perhaps best described as irresolute. After one holds the sensor for a number of seconds, a lone light bulb, suspended at eye level in front of the sensor, relays back the perceived heart pattern. This is an opportunity to experience a fleeting moment of uncanny recognition. How often is a heartbeat seen? Immediately following this brief dance between an embodied beating and its illuminated counterpart, the entire installation quietly falls dark. Each bulb then reignites and the new heartbeat becomes included amid the hundreds already registered. In bare industrial light bulbs, arranged in clean lines that evoke the precise theatrical lighting of marquees, the subsuming of one beat into many evacuates all singularity, a necessary concession for the immersive effect of the work. Here, the offered heartbeat is transformed into an anonymous trembling light, lost in a cacophony of other incandescent rhythms.

A compelling parallel exists between Pulse Room and similar interactive projects, particularly Christian Boltanski’s Les archives du coeur (The Heart Archive) (ongoing). An expansive endeavour that eponymously seeks to record, catalogue, archive and exhibit the heartbeats of tens of thousands of people, Boltanski’s project is an exercise in posterity-making and a profound gesture that attempts, yet possibly fails, to mitigate mortality. And while Lozano-Hemmer’s project similarly conjures thoughts of the limits of corporeality and the ways in which we exist through traces left behind, Pulse Room fundamentally diverges from aspirations of duration; each time an illuminated heartbeat is added to the installation, the eldest is discarded with a mechanical indifference. In this way, the quivering cadence of light that represents life here mirrors the fragility inherent in a real heart’s limited number of beats.