In BC, as in many other regions of Canada, forestry acts as creator of livelihoods and destroyer of landscape. Artists help nuance this relationship. 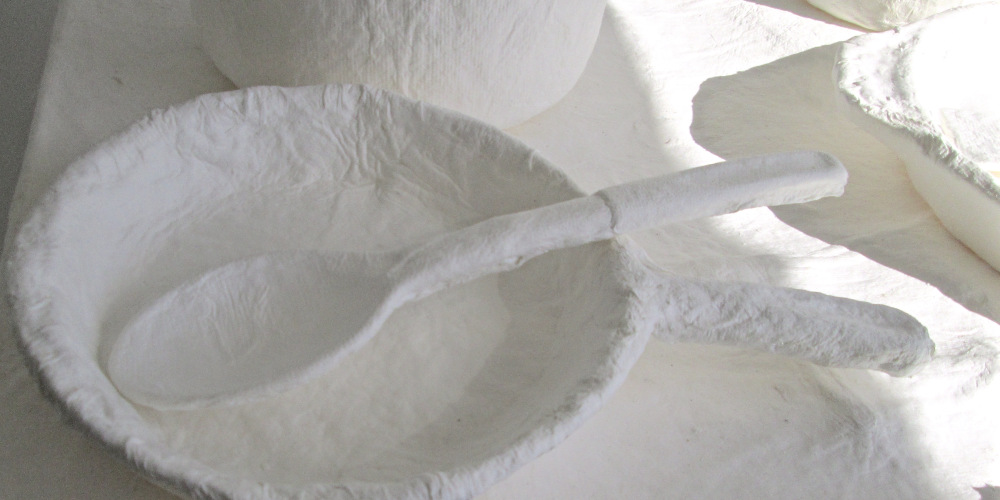 A cast-paper pan and spoon in Susan Barton-Tait's Prince George studio. In casting many common household items, large and small, in paper, Barton-Tait relies on the region's plentiful supply of pulp board, a byproduct of the forestry industry.

A cast-paper pan and spoon in Susan Barton-Tait's Prince George studio. In casting many common household items, large and small, in paper, Barton-Tait relies on the region's plentiful supply of pulp board, a byproduct of the forestry industry.
A cast-paper kitchen scene by Susan Barton-Tait. Photo: Facebook.

All highways into Prince George, the “capital of the north” of British Columbia, lead travellers past some form of the forestry industry. From the east, the Canfor pulp mill sits at the confluence of the Nechako and Fraser Rivers, emitting chemical plumes. From the south sprawls a wasteland of trucking companies, such as Peterbilt and Lomak. At the inland port, freight-train cars full of pulp chips and two-by-fours wait to be shipped, in time moving across the river and along the cutbanks.

These aspects of the forestry industry appear, to many, to be seamless in the landscape, integrating themselves into the city’s consciousness. And they mark a dichotomous identity of success and struggle. The forestry industry has been a driving force behind BC’s economic growth for many decades, but in recent years it’s experienced significant bust cycles as the mountain pine beetle epidemic swept across the northern and central regions of BC, wiping out great stands of trees (some say up to 70 per cent) and leaving what many came to see as devastation.

It is not surprising that artists of northern BC and nearby Alberta, then, would be drawn to focusing on aspects of the forestry industry, whether materially or thematically. Here are five area creators who explore aspects of this complex—and often contradictory—force, with resonances relevant across a nation that (knowledge-economy fanfare notwithstanding) remains largely dependent on natural resources.

Susan Barton-Tait, originally from Ontario, has worked with handmade paper during most of her artistic practice.

After relocating to Prince George 12 years ago, Barton-Tait began using pulp board, a byproduct of logging pine-beetle-kill trees. Many such trees were put through a chipper and then processed into pulp board.

As a result, pulp board is available in plentiful supply here, for if there are any flaws in the product, it cannot be shipped out. Thus it became a natural choice of material for Barton-Tait, and she began building a body of work around it.

Much of Barton-Tait’s work focuses on casting prosaic objects, which she displays in her studio window in downtown Prince George. Simple, straightforward, using a palette of only white, Barton-Tait’s cast walls, fruit, vegetables, tables and chairs are compelling.

Barton-Tait has cast firewood and large-scale rocks that hang weightlessly from the ceiling. The work is ghostly, standing guard in the window for passersby to witness. Her pieces, made from the byproduct of trees long dead and stemming from an industry that is in a constant state of flux, acknowledge and honour the death of trees, as well as the industry that provided the material from which her work was born.

Annerose Georgeson approaches the forestry industry from another perspective. Born in Switzerland and raised in Vanderhoof, where she lives, Georgeson saw pine beetles decimate the trees on her and her partner’s property, which they consequently were forced to log.

But rather than concentrating on the devastating aspect of losing the landscape she had become so fond of, Georgeson began to learn a new vernacular, a new forest vocabulary.

In her large-scale paintings, Georgeson explores many unassuming features of the forestry industry: felling trees, snowshoeing in the forest to find the best location for bunching trees, watching a loader pile trees onto a truck. Georgeson goes deep into the woods, often accompanied by her brother, who is a logger, to experience every aspect of the process.

Stepping away from traditional, more pastoral landscapes, Georgeson focuses on the instruments of industry that actually permeate the landscape. Like beacons, these machines, giant and ungainly, swing their arms, grasp trees and clamp on tight.

Georgeson’s style is painterly; her brushstrokes are swift and open-hearted, suggesting simultaneously her connection to the forest itself and her understanding of forestry’s demands. Her canvases translate a world where trees go from being unmovable giants to transformable commodities—art being one of those commodities, too.

Allan Farmer was born and raised in Prince George, and worked as a log scaler. He had a secret passion for the visual arts and painted in his spare time. He planned to spend his retirement painting, but died not long after retiring.

Fortunately for the community of Prince George and surrounding region, Farmer’s work was donated to the permanent collection at the Two Rivers Gallery, where I (full disclosure) work as assistant curator.

Though not a trained artist, Farmer had an established style and palette. His oeuvre portrays both pastoral scenes and industrial landscapes, all washed in a golden hue; these views not only depict the mountains of Robson Valley and farmer’s fields, but also logging equipment within the forest, and the outskirts of the city during the darkness of dawn, the brightly lit pulp mill a central focus.

Farmer’s work compellingly demonstrates an aesthetic understanding of an industry that many see through a lens of environmental destruction. In Prince George, as in many other cities and towns across Canada, the forestry industry was and continues to be a source of livelihood. This lends Farmer’s canvases an uncomfortable dissonance: harmony and pleasure of the landscape’s beauty contrasts with an industrial activity that supports the lives of many.

Claire Kujundzic, based in the hamlet of Wells, has also concentrated on the mountain pine beetle epidemic in her work.

Kujundzic and her partner, fellow artist Bill Horne, are contemporary homesteaders, living in a converted church in this small town southeast of Prince George. There, they are surrounded by pine forests that became rife with infection and death.

While examining the pine-beetle-kill trees, Kujundzic discovered the beetle trails carved into the wood under the bark. The trails resembled passageways, or the scripts of an indecipherable text. Kujundzic then used charcoal to trace the pathways onto long swathes of silk. Kujundzic’s silks are red, ochre and rust-coloured, recalling the earthen hues of pine needles post-kill. When installed, these silken ghosts, which form the basis of Kujundzic’s series Cariboo, stand guard as sentinels, creating a kind of forest that resurrects lost trees.

Kujundzic’s series also brings to mind, at least for me, the dangers that can occur during the processing of trees. In 2012, two mills—one in Burns Lake and one in Prince George—experienced deadly explosions, allegedly due to the dust from pine-beetle-kill trees. Using an ethereal material like silk that, particularly when red, could evoke flames, her series conjures human, as well as ecological, violence.

In 2005, Alberta artist Peter von Tiesenhausen was invited to do a residency project with Two Rivers Gallery.

Von Tiesenhausen had already been introduced to drawing on pulp board in the Peace Country region of Alberta. At Two Rivers he returned to this process, using Japanese brushes and watercolour paint made from pine ash to draw memories of trees.

Having been touched very personally by the pine beetle epidemic, von Tiesenhausen was interested in documenting not simply trees, but memories of trees. On sheet after sheet of pulp board, he created loose, script-like brushstrokes evoking what was once a tree. To him, creating a tree from memory makes one more conscious of the tree’s existence, its character nuanced in an entirely different light.

Von Tiesenhausen’s Residuum consisted of hundreds of pulp-board drawings hung floor to ceiling, creating the sensation of a forest of ghostly trees. It evoked many of the same sentiments that other artists in this article and elsewhere have sought to express in the wake of the mountain pine beetle epidemic: mourning for what was lost.

However, von Tiesenhausen’s work also speaks to the opportunities that arose not just despite, but because of, the devastation. Without the demise of the pine forests, the very material that the artist’s work was made from would not exist.

These are just a few of the examples of artworks that relate to the Western Canadian forestry industry thematically or materially. The five artists listed here create, in a sense, a new language for orienting dialogue around landscape. They use traditional forms of visual arts as well as installation and mixed media to translate the beauty of the forest, the loss that comes with naturally borne disease, and the opportunities that exist for interpretation.

Each of these artists—like many more across Canada—approaches the forest from their own unique standpoint, critiquing and embracing the forestry industry.
Their art nuances the spaces between our attachment to the sanctity of the forest and our need for the industry that keeps communities like Prince George, and hundreds of other towns and cities from coast to coast, afloat.

Maeve Hanna is assistant curator at Two Rivers Gallery in Prince George. She lives in a log cabin in Buckhorn, just outside of the city.

Maeve Hanna is a writer and curator based in Treaty 7 territory (Calgary, AB). She publishes with national and international periodicals including Akimbo, Black Flash, Border Crossings Magazine, C Magazine, esse arts + opinions, and others.