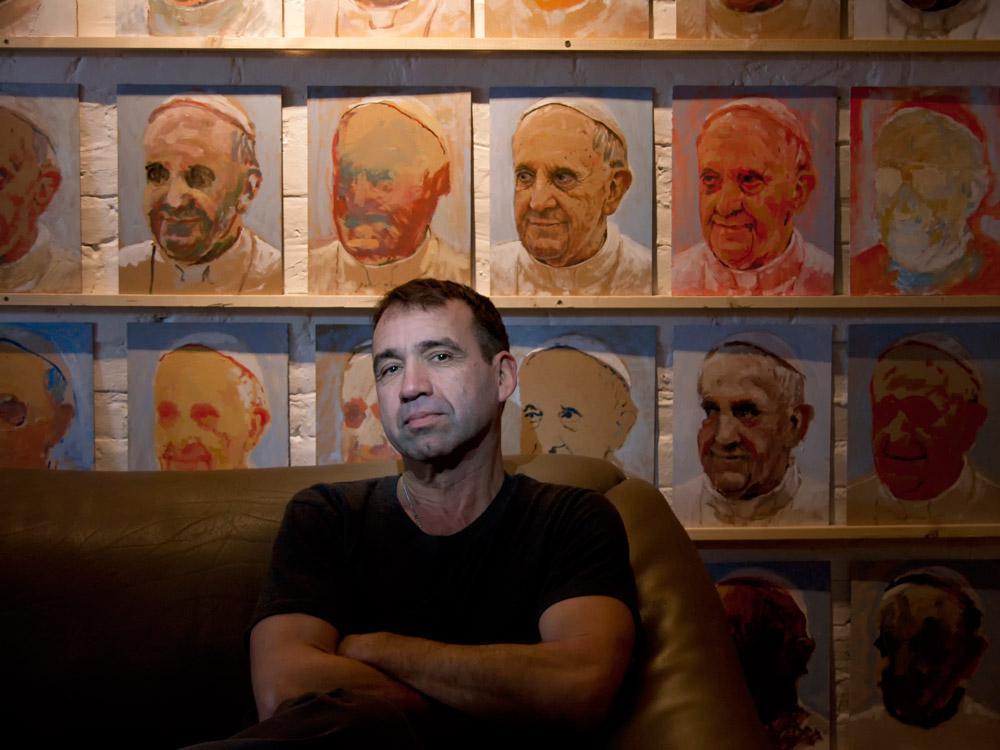 Canadian-German artist Peter Wilde in Berlin with his new series of Pope Francis paintings. On reviving his painting career in his 40s, Wilde says, “Everybody in the Canadian art world wants young, young, new, new, young, younger. I was told outright, ‘It's too late for you.” So I left Canada and came to Berlin, where people don't care about my age.” Photo: Boris Eldagsen

Berlin is plastered in guerrilla stickers that read “Berlin Hustles Harder.” With the sudden influx of Russian gays escaping Putin’s homo-grom, Berlin is certainly full of hustlers—but, sadly, the stickers are merely ads for a local clothing company.

Nevertheless, the city is coming out of its Euro-crash coma. No expatriate artist exemplifies this new hustle and bustle more than the Canadian-German painter, film-set designer, curator and antique broker Peter Wilde.

A former gallerist (his Wilde Gallery had a good Berlin run, but he packed it in after a few recession-weary art fairs), Wilde has been gaining attention across Germany and internationally for his career re-invention as a talented portraitist, in particular for his multiples of politicians and controversial media figures, as well as his newly launched co-curation of KIK (Kino International Kunst) exhibitions—one-night-only, multi-media group shows (and massive social events) that take over Berlin’s fabled (and spooky) Kino International cinema.

For someone who paints public figures as if his stub end of his brush is on fire, in mad swabs and glutinous dashes, Wilde maintains a very tidy studio. Must be the German in him. I met with Wilde and we chatted about his second debut as an “emerging” painter who is over 50, and a bona fide Berlin bon vivant.

R.M. Vaughan: I overheard you at the last KIK opening tell a young artist to not put off her practice, and that you “regretted” being a full-time artist “late in life.” You’re not exactly retirement age.

Peter Wilde: But I do regret some of my choices: that I never really took the plunge when I was young, that I decided to be “responsible.” The other things I’ve done—antique dealing, set decorating, running a gallery—were and are really interesting. But now, late in life—I’m 54, that feels late for an artist—well, if I don’t go for it now, it won’t happen.

And now that I’m living life as a full-time artist, I realize this is where I am happiest; it’s all I’ve ever really wanted to do, to be in my studio painting. I’m entirely out of the set-decorating business, and the antiques business, although I do get asked to work on new projects in both all the time.

I feel driven, like I’m catching up—and my skills are moving at the same pace, I’m progressing faster and faster. It’s exciting, and terrifying too. You have to remember that I had a practice in Toronto in my 30s, and then I got really sick [Wilde is a diabetic who must constantly monitor his blood-sugar levels], and then I got better, but I was in my 40s by then and nobody—nobody—would look at my work.

Everybody in the Canadian art world wants young, young, new, new, young, younger. I was told outright, “It’s too late for you.” So I left Canada and came to Berlin, where people don’t care about my age.

RMV: Your series of paintings of political figures—Angela Merkel, Barack Obama, Edward Snowden, and now Pope Francis—have generated a lot of press here in Germany. Are you worried they will be perceived as stunts?

Peter Wilde: No one has ever said that to me. Ha!

Here’s what I have noticed: when people look at the portraits, they bring their own political issues to the work. But I’m trying to be neutral, politically. Of course, there is a Warholian aspect, and I try to keep that Warholian neutrality.

For me, the more interesting question is, If all these politicians are engaged in social media—and they all are—is that an invitation to intimacy? I wanted to know if I could know these public figures, or get to know them, by painting them over and over. The answer is, of course, no.

I guess I knew that before I started—that what I’m doing is a kind of planned failure. Everything about a public figure is about PR—even their faces. That’s what I’ve discovered—a traditional idea of intimacy is impossible, no matter how long you stare at them.

RMV: With all this going on, why start a new venture? Namely, the huge KIK shows?

Peter Wilde: KIK is a revival of a particular type of Berlin art party: the all-night art party.

When I moved here in 2007, there was one a week, and then they disappeared. I missed the events; they were so Berlin to me. I was chatting with “the Winters” (Christian Winter, director of Kino International, and Christopher Winter, an artist-curator, no relation), and they missed the art parties too. So now we’re doing them.

And, yes, hanging art and setting up installations in the KI, which is like Aladdin’s cave, is a lot like set decorating. I guess I never stray too far.