Otto Rogers and a Life in Art 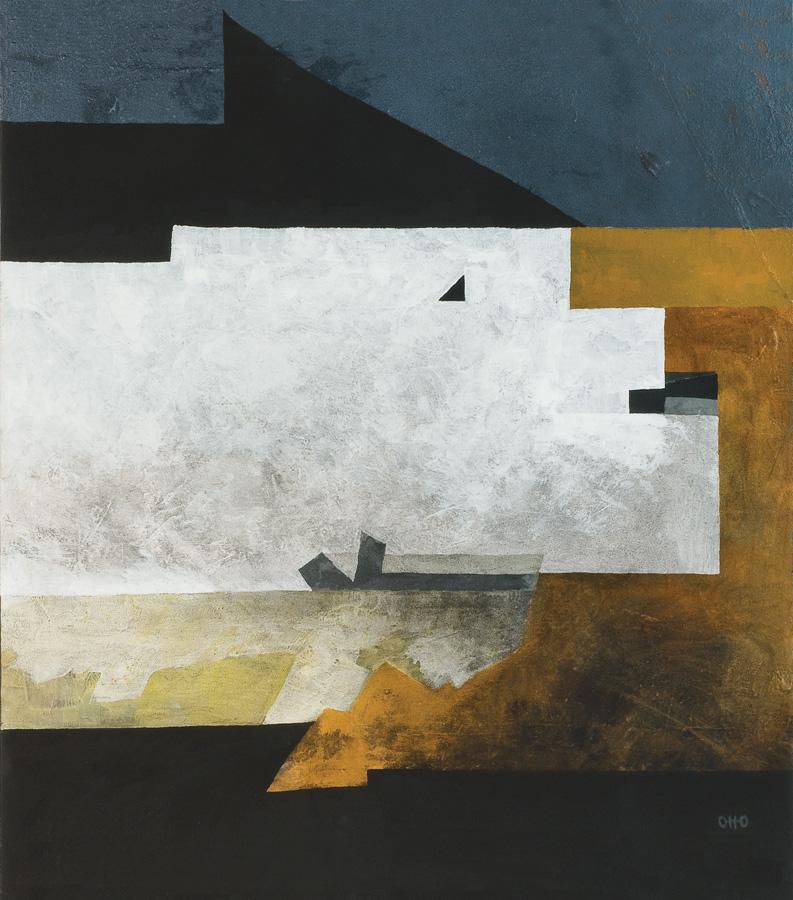 Until a solo exhibition was held in June 2013 at Mira Godard Gallery in Toronto—his first in that city in 10 years—distinguished Saskatchewan painter Otto Rogers had been out of the limelight for too long. For the past 15 years, he has been living with his wife, Barbara, in Prince Edward County, Ontario, in a family compound and rural retreat with a rambling, waterfront bungalow; a spacious studio building designed by his son-in-law, the architect Siamak Hariri; and a serene and elegant library above the two-car garage. To be sure, during that time Rogers had three local exhibitions at Oeno Gallery, which produced catalogues for two of them. Other exhibitions took place at Paul Kuhn Gallery in Calgary, The Gallery/Art Placement Inc. in Saskatoon, Moore Gallery in Toronto, Gallery Jones in Vancouver and Calgary’s Nickle Galleries. The quality of these exhibitions was a reminder that Rogers is a distinctive and important artist. Sculptor Anthony Caro once observed that Rogers’s work is, “always so original, unexpected… absolutely his own.” And yet this accomplishment was not matched by equivalent attention in the media.

Before settling in Prince Edward County, Rogers, a devout Baha’i, spent 10 years in Israel working at the Baha’i World Centre. That necessarily imposed some limits on both the production and exhibition of his art and further isolated him from tastemakers in Canada. Before that, he worked in Saskatoon, which has a thriving art community and close access to the Emma Lake Artists’ Workshops, but is no great metropolis. Given Rogers’s proclivity for working in relatively isolated environments—there was also his three-month sojourn in Iceland in the early 1970s—the artist strikes me as a Canadian counterpart to Post-Impressionists such as Cézanne, Gauguin and Van Gogh, who also chose to work away from major art centres. As Clement Greenberg once wrote in the Art Digest, there can be some advantages to the provincial situation and major art can be made anywhere.

That Rogers became an artist is in itself remarkable. His origins were humble and rural. He was born in 1935 in the tiny town of Kerrobert, Saskatchewan, which has a current population of about a thousand. While his mother attended business college, Rogers’s father had not completed much more than grade eight. The only book in the house, until an encyclopedia arrived to join the Bible, was the Eaton’s catalogue. There was certainly no art. Rogers did grades 9 and 10 by correspondence. Without knowing it at the time, he turned his isolation into what were perhaps installation artworks of sorts during his teens. He constructed an extensive model store and an imaginary movie theatre in the family barn. When he eventually entered Saskatoon Teachers’ College, landscape painter Wynona Mulcaster was fortunately at hand to recognize his talent. She persuaded his parents to send their son to the University of Wisconsin, where he earned both a bachelor’s and a master’s degree in art—credentials that brought the opportunity to teach a university art program.

In 1963, Greenberg singled him out in Canadian Art as the only “big attack” painter in Saskatoon, one with a “fullness of inspiration.” He soon became a recognized national art figure. By the 1970s, Rogers was exhibiting in Toronto, Montreal, Paris and Milan.

Students of his remember him as a respected mentor. He taught art at the University of Saskatchewan for almost 30 years, from 1959 to 1988, and chaired its department of art and art history between 1973 and 1978. Among his students were artists David Alexander, Douglas Bentham, Robert Christie, Jonathan Forrest and Don Foulds, as well as Paul Kuhn, the Calgary art-gallery owner. Christie remembers Rogers as “a charismatic teacher,” and one of the two “dominant forces in the department,” the other being Structurist Eli Bornstein. Bentham, a sculptor, appreciated Rogers’s “optimism” for the medium and the idea that “the materials of art hold unlimited possibilities for expression.” That affection for and confidence in the medium and its possibilities has been a hallmark of Rogers’s studio practice and career. Kuhn remembers Rogers as “a fantastic mentor, a task master with very high standards.” Rogers was instrumental to Kuhn being taken on as framer at Mira Godard Gallery in Calgary, a crucial step on the path to later opening his own gallery.

Although known primarily as a painter, Rogers has had a strong interest in sculpture since his undergraduate days. Two early exhibitions in Saskatoon, in 1960 and in 1965, were solely devoted to sculpture. He was one of the first artists in Canada to make welded-steel sculpture, which made him an ideal guest leader, along with Caro, Bentham and Terry Fenton at the 1977 Emma Lake Artists’ Workshop. Later, Caro invited Rogers to participate in his Triangle workshops, first in New York in 1984 and then in Barcelona in 1987. The latter led the Barcelona Museum of Contemporary Art to acquire three of his sculptural reliefs.

Rogers works in the Cubist-Constructivist tradition that stems from Pablo Picasso, Julio González and David Smith. As Picasso once did, Rogers has collected African sculpture, and is moved by its “architectonic strength and expressive vigour.” His sculpture work comes in periodic spurts closely related, I would suggest, to circumstances of personal loss. It is as if the sheer facticity of sculpture, with all its solidity, serves a need at such a time. Rogers, for instance, made sculpture throughout 1976 after the death of his mother and then again in 2011, following the death of his daughter Kim from breast cancer. The resulting Kim’s Tribute series (2011) includes some of the most moving work of his career. Rogers acknowledges that Circle Dance (2011) is very feminine, like a torso, and yet it resists being read as such, functioning primarily as a play of presence against absence, vitality against inertia.

Rogers’s first paintings covered various genres—portraits, still lifes, landscapes and cityscapes—but over time he came to recognize an “ongoing crisis of subject matter” that led him “to obliterate traditional drawing.” It does, however, re-emerge at times, as in the tondo Grass Fire Landscape (2003), and in works on paper, such as the splendid monotype Motion in Stillness (2012) with its delicately delineated leaf-forms.

Rogers’s paintings emphasize value contrast over subject matter. Whether within a narrow range or a more expansive one, the overall composition declares him a tonal painter. He stands apart from much Canadian abstract art, in which colourists working with a high-keyed palette so often held the lion’s share of critical attention. This preoccupation with shifts in values reflects Rogers’s love of light. It is tempting to credit that love merely to the vast, sunlit expanse of the prairies he was raised on. But light has a special meaning for him beyond that. He associates it with knowledge and wisdom, in part because of his Baha’i faith. Baha’ullah, founder of the faith, once said, “My name is light and I come from the province of light,” and for Rogers, “the two great factors in creation [are] unity and light.”

One of the defining features of Rogers’s art is its focus on layout, on the exact placement of forms. It is a preoccupation grounded in his observation that “in the face of infinity there is a struggle to place oneself on solid ground.” His placement of forms can seem unsettling, strangely angled, awkward, unbalanced, isolated even, yet eventually they resolve into a meditative and uplifting calm. As art critic Robert Enright puts it, “an inner peace” is found.

Rogers has aimed to achieve the “studied atmosphere and mellow light, [the] inner and meditative pursuit,” that he finds in the Old Masters and with the “youthful inventiveness and bold vigour of modern American art.” But the complexity of his art goes beyond that ambition. His aesthetic is consistent with literary critic Cleanth Brooks’s idea that the essential structure of a work of art is “a pattern of resolved stresses” that results in “an achieved harmony.” “In a work of art you take maximum diversity and create a unity…that has a life of its own,” says Rogers. He remembers that when Mulcaster first saw his work while he was in teachers’ college, she recognized in it “a struggle between Yes and No.”

Rogers aims to set up opposing aspects of a painting or sculpture and develop the work into “an order that will sustain them” in “total configuration” as “a whole and pure thing.” He argues that art “presents…motion and stillness simultaneously.” In the sculpture Music Memory (2008), Rogers sets the solidity of concrete against an expansive void, and then further complicates the situation by countering its central axis symmetry with a mass on the right side. Other times he sets up “the ambiguous and the concrete in juxtaposition.”

Rogers is an intensely self-critical artist. “I know that excellence itself is spiritual,” he says. He can edit quite ruthlessly: “There comes a moment when you have to make a major sacrifice of elements that appeal to you in order to get the work to resolve.” For Rogers, this is a matter of character: “You’re sacrificing your own limitations.” On occasion he will repaint the major portion of a picture, as he did with Enigma (2013), retaining only the top three inches of the original. He can deliberate at length over questions of final adjustment. It once took him three months to decide where the bottom should be for the small tondo Three Moon Composition (2012). Enigma was substantially altered after it had been exhibited.

In person, Rogers is unassuming, understated and seemingly imperturbable. He remembers how Greenberg once observed that he did not push aggressively enough to advance his career. Rogers, however, would never engage in brash self-promotion. Rather his goal is to perfect his life and his art. Matisse once said, “You’re in everything you do, in your earliest pictures just as much as the last.” Rogers’s artistic personality is unmistakably his. It is a personality consistently marked by calm, measure, luminosity and repose.

In a catalogue text on the work of Jackson Pollock and Mark Tobey (who, like Rogers, was also Baha’i), critic Judith S. Kay looks at how Modernist critics have downplayed Tobey’s work, and quotes curator Jeffrey Wechsler for explanation: “Artists who were unassuming personalities, their soft, muted painting styles reflecting their soft-spokenness, logically stirred up less passionate advocacy than their polemical, aggressive confreres.”

Bentham is perhaps correct when he says about Rogers that, “I believe his contribution to art-making is overlooked.” But appreciation of Rogers is due. He is no empty formalist. For him, art is not simply a “decorative thing,” but rather “a means of elevating consciousness.” He believes that “the sense of peace” that art conveys reflects “attributes of the soul” and that the “‘significant form’…elevates the human soul.”

Rogers is therefore aligned with philosophers like Hegel and artists such as Wassily Kandinsky, Franz Marc, Lawren Harris, Hans Hofmann and Barnett Newman. All of them maintained that art has spiritual values and that it can aim for a certain kind of wisdom. Rogers keeps those values in motion.

This is a feature article from the Spring 2014 issue of Canadian Art. To read more from this issue, visit its table of contents. To read the entire issue, pick up a copy on newsstands or the App Store until June 14.