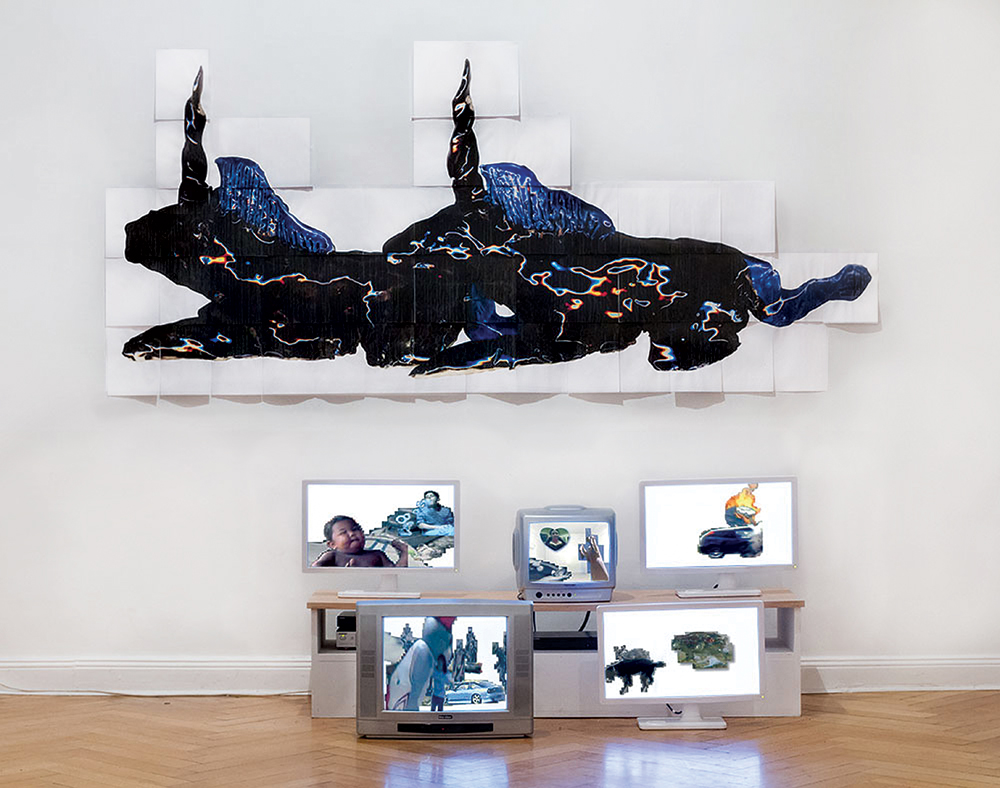 Still from Daniel Temkin's contribution toWays of Something (2014), complied by Lorna Mills and commissioned by arts organization The One Minutes for the Sandberg Instituut, Amsterdam.

Mills’s art is exuberantly raunchy, but so is much of the Internet. Her medium—the graphic interchange format, or GIF, a lightweight digital motion-picture technology—is about as old as the World Wide Web itself. She sources the footage for her hyperactive collages from user-moderated forums like Reddit, troll caves like 4chan, humour sites featuring bloopers from porn films (called pornfails) and oddball Russian domains that are teeming with nasty Internet detritus. “Russian sites are really bad, by which I mean really good,” says Mills. Her collages feature grainy images of humans and animals, all of them moving (read: breathing, gesticulating, fucking) in jerky, repetitive motions. She disseminates her work mostly through electronic platforms, including Google Plus, social-networking application Ello and Digital Media Tree, an eclectic blog operated by New York programmer Jim Bassett.

Today, net art is an established phenomenon, attracting growing interest from critics and collectors, but some traditional museums aren’t sure how to handle it. How do you capture the Internet’s vulgar, democratic spirit while adhering to the principles of decorum that remain important to many art institutions?

Mills was recently invited to exhibit at “X+1,” a one-night showcase in February of this year at the Musée d’art contemporain de Montréal. The piece she submitted, from her Ungentrified (2014) series, included embedded GIFs of a boy humping a dog, a child smoking, a house cat with a bouncy pair of human breasts superimposed onto its torso, two athletes having stand-up sex at the Trojan Games, a tiger heaving like it’s about to puke and a hilarious orgy scene—all of them presented in cloying, heart-shaped frames. The piece had already exhibited at OCAD University for Nuit Blanche Toronto, and the “X+1” organizers loved it, but then one of the MAC’s higher ups pulled it, forcing Mills to submit a milder, last-minute replacement. “Boring, conceptual, grey Toronto had no problem with my GIF,” says Mills, laughing, “but apparently it was too much for swinging Montreal.”

Mills may not have the celebrity status that top-tier painters and sculptors enjoy, but in the parallel net-art universe, she’s a big deal. “A kind of international scene is coalescing around her work right now,” says Sally McKay, an artist, writer, teacher and curator who has known Mills for years. A 2012 Flavorwire list titled “11 Net Artists You Should Know” put Mills at number three.

In the last year, she has exhibited not only in Dubai, where her work accompanied a paper by writer and video artist R.M. Vaughan, but also in Vancouver, Toronto, New York, London, Milan, Cologne, Amsterdam, Dublin, Paris, Moscow, Hanover and the Canadian Embassy in Berlin. Her curatorial endeavours include a 15-artist showcase at the AGO for the 2013 opening of “David Bowie Is,” and a four-part online video project, titled Ways of Something (2015), which brings together 114 net artists from across Europe and the Americas.

I’m on the older side of Gen-Y, but I still sometimes buy into that stupid fantasy in which only people my age and younger understand the Internet. When I rang the doorbell at Mills’s Little Portugal apartment, I was expecting a young, coy, waiflike hipster. In fact, Mills is talkative, openhearted and middle aged. Her place is spacious, with massive houseplants and two guest rooms for the many friends who visit. She shares it with Flint, a loving, 160-pound Neapolitan Mastiff puppy who smells “like Satan’s dirty laundry” when he’s overdue for a bath.

Although she refused to discuss her life story, she was happy to demonstrate her artistic practice. We trawled through Reddit in search of usable source material: GIFs that are un-arty, made from real footage and, for the most part, disconnected from mainstream culture. Her favourite subjects include “cross-species romance, dogs with itchy butts, drunk people barfing, strange fish, cloud formations, car crashes with test dummies flying out of them, weird glitches from video games that force human bodies into unnatural contortions, hilarious porn scenes, baby pratfalls, animals with clothes on, dogs humping unsuspecting humans, people wanking, kangaroos wanking, bears wanking”—anything outrageous, raunchy or abject.

Mills then liberates her subjects from their rectangular digital boxes by cutting away at the background, frame by frame, in a program called Easy GIF Animator. Her cuts are never surgical: large chunks of background imagery adhere to the figures’ edges, giving them a grainy, pulsating aura. She collages her moving pieces in Adobe Flash Professional. The art is in the arrangement: she strives for the moment when each GIF moves independently but in a way that relates, somehow, to those around it.

It’s a gruelling trial-and-error process, the kind that only an obsessive formalist would submit to. “I want an underlying rigour in spite of the ridiculous subject matter,” says Mills. One collage, from her Abrupt Diplomat (2015) series, includes a glass with what looks like a whiskey cocktail in it, a clam extending its tongue gluttonously beyond its shell and, in between them, a column of fire, like the one that led the Israelites out of Egypt. Mills wanted the clam tongue to reach through the fire toward the drink as if it were desperate for a taste of hooch. “You wouldn’t believe the amount of tweaking it took just to get the tongue hitting the glass at the right spot,” she says.

The early 2000s, when Mills first took an interest in GIFs, marked a turning point in Internet history. “There was a real push for the professionalization of the web,” says Paddy Johnson, founder and editor of popular blog Art F City. Beginning in 2004, Facebook, with its office-cubicle aesthetic, moved in to displace its tacky cousin MySpace, and companies began cleaning up their web pages to reflect professional standards. The brash GIFs that proliferated at the time were incompatible with the new corporate look. That’s still the case: MySpace was once brimming with GIFs, but Facebook refuses to support the technology.

Mills’s art belongs to the non-professionalized Internet, or what Johnson calls the “people’s web”: the one of hobbyists, humourists, weirdoes and perverts. When I first saw her GIFs, I pegged them for exercises in nostalgia. Why else would an artist make choppy low-res work in a high-definition era?

McKay insists, however, that Mills’s aesthetic is rooted not in backwards-looking sentimentality but rather in a sense of loyalty to her materials. “The low-res thing can have a retro feel,” she says, “but it’s more about being transparent about the construction of the thing and its aesthetic life online.”

As a medium, the GIF’s special value lies in its cheapness, its accessibility and the way it loads on almost any platform, even one that’s accessed through a lousy Internet connection. These properties explain its resilience. The format may date back to the late ’80s, but it remains a going concern: in April 2013, the magazine Wired referred to the GIF as one of the “primary means” of online communication, a visual language in and of itself, and in September of that year, the site Imgur, an image-hosting service and massive GIF repository, reached 100 million unique visitors within the month alone. It’s technically possible to make souped-up GIFs with the fluid motions of a Pixar movie, but then why work with the medium at all? “Lorna likes GIFs with jerky movements,” says Johnson. “And I think that’s part of the appeal: it exaggerates their GIFy-ness.”

Mills’s art is disassociated, at least as much as it can be, from the aesthetics of the professionalized Internet—and also from traditional art-world institutions. She is more than willing to exhibit at mainstream galleries, and she’s happy to sell artwork loaded on tablets or thumb drives to the growing community of net-art collectors, but she isn’t keen to replicate the hierarchies of the offline art world.

For her curatorial project Ways of Something, Mills divided the audio track from John Berger’s famous BBC documentary Ways of Seeing (1972) into a series of minute-long segments. Each participating artist got a minute to work with. They could create whatever visual accompaniments they wanted to, so long as they didn’t edit out Berger’s voice or alter the closed captions without consulting Mills first.

I’ve watched the first two episodes, which are wonky, raucous and weird—consistent only in their inconsistency. That patchiness is what makes Ways of Something work. Mills takes each artist’s contribution as it comes, refuses to editorialize and splits whatever money the project generates evenly between all of the collaborators. “In some circles, it would be totally acceptable for me to take the lion’s share of the money,” she says, “but I’m too fucking Canadian lefty to do that.”

In her 2014 exhibition at Nuit Blanche Toronto, Mills transformed OCAD University’s Great Hall into a garden of digital delights, displaying GIFs on stacks of CRT monitors and through panoramic screen projections. The exhibition included images that would later appear in the kiboshed MAC submission, as well as a fantastic collage featuring boxing kangaroos and a supine bulldog, which Mills chose for its likeness to Hans Holbein’s The Body of the Dead Christ in the Tomb (1520–22).

Attendees weren’t surfing the web so much as swimming in it. “It was so funny to be in that room,” says McKay. “Because everybody stopped. People were just staring and staring and pointing things out to each other. I felt like I was in the room for about an hour, and I’m sure I didn’t see everything.”

The intensity of Mills’s art is rooted not just in the proliferation of images but also in their strange choreography. The loops last less than a second, but so much seems to happen, and everything moves according to a complicated internal logic.

I’ve noticed that with many of Mills’s collages, there’s some kind of gaseous agent—smoke or fire—that seems to animate the other activities in the frame. In one piece, Bowie Smoked (2013), the iconic glam rocker blows a cloud of cigarette smoke into the middle distance, giving power to the other moving elements: a dog squirming while being tickled, a creepy clown making a “come hither” gesture with its fingers, a wanking hand. In another, from the Ungentrified series, an RV explodes into a grainy fireball and, as if propelled by this energy, a white-and-grey husky in the foreground lunges unsuccessfully at floating soap bubbles.

I’ve come to see these clouds of fire and smoke as metaphors for the wild, uncontrollable energy of the non-professional Internet—a seething domain fuelled by curiosity, perversity and our need for yuks, thrills and a chance to get off. These impulses may seem prosaic, but when hundreds of millions of people pursue them simultaneously, the results are formidable. The people’s web is one of the largest international communities in history, and Mills is right in the middle of it.