Kent Monkman has created a life-sized buffalo jump (with two 300-pound taxidermy bison) for an installation at the Gardiner Museum. Chris Hampton reports. 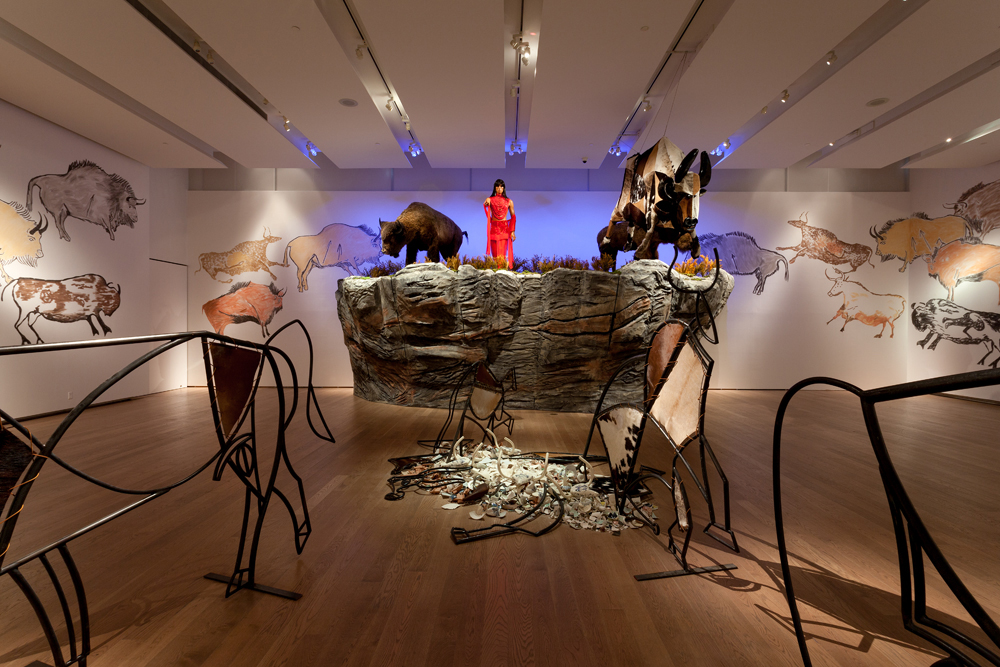 The Indigenous peoples of the Great Plains used to hunt bison by herding the animals and driving them off a cliff. Hunters waited below the so-called buffalo jumps to finish off the kills. The Plains peoples depended on the bison—they were an important food source, their hides could be used for clothes and shelter, their bones could be made into tools—and their decline, spurred by westward colonial expansion, contributed to the population decline of those Indigenous peoples.

On the third floor gallery of Toronto’s Gardiner Museum, an institution dedicated to the collection and study of ceramic art, Cree–Irish Canadian artist Kent Monkman has recreated a life-sized buffalo jump for an ambitious installation called The Rise and Fall of Civilization. The nine-foot cliff structure was carved from Styrofoam and trucked in section by section from the artist’s Prince Edward County studio. A statue of Monkman’s two-spirited, trickster alter ego, Miss Chief Eagle Testickle, presides over the room from the cliff top alongside two 300-pound taxidermy American bison, which had to spend a week in the ROM’s deep freezer to ensure that they were pest-free (far from an everyday procedure for the ceramics museum, says executive director and CEO Kelvin Browne).

With the help of a crane and a scissor lift, two of Monkman’s assistants finish hanging a Cubist-looking, fibreglass bull suspended from steel cables a few feet off the cliff, as if it’s just leaped. Just below, Monkman has heaped shards of clay, stoneware pots and other remnants collected from the ceramics classes at the Gardiner like bison bones, topped by an editioned set of hand-painted earthenware cattle skulls, which resemble Picasso’s bicycle seat and handlebars sculpture Bull’s Head (1942). Rising from the bone pile, a herd of two-dimensional steel bovine characters, inspired by Picasso’s 11-suite lithograph series Bull (1945–46)—each more reduced and simplified than the last—marches away from the mountain. The figures continue onto the wall like pastel pictographs sourced from the Lascaux cave and North American rock paintings.

“Kent’s the kind of artist that you want to have come to your museum and see what they’re going to do,” Browne says, “to see how they’re going to react.” The pair previously worked together eight years ago on “Shapeshifters, Time Travellers and Storytellers,” an exhibition at the ROM’s Institute for Contemporary Culture that invited eight contemporary Indigenous artists to create work inspired by objects from the museum’s holdings, for which Monkman reinterpreted the paintings of Paul Kane.

Art history has long been his launching pad. “I generally go into a museum, see what they have in their collection, dig around and look for inspiration,” Monkman says. “This being a ceramic museum, the first thing I thought was, ‘Do they have any bone china?’” During the late 1800s, decimated by hide hunters, American bison populations plummeted from between 50 and 70 million heads of cattle to just under 1,000 animals. Filmmaker and Indigenous literature scholar Tasha Hubbard quotes General Phillip Sheridan, one of the engineers of the buffalo kill-off, in her catalogue essay: “[The buffalo hunters] have done in the last two years and will do more in the next year to settle the vexed Indian question, than the entire regular army has done in the last thirty years. They are destroying the Indian’s commissary, and it is a well-known fact that an army losing its base of supplies is placed at a great disadvantage.” The buffalo extermination was an unofficial strategy to move both bison and Indigenous peoples from valuable land. The bones of the slain animals were ground up and sent back to Europe to make porcelain. Those ornamental cups and saucers are a potent symbol for Monkman. The Gardiner itself has a sizable collection of 19th-century European bone china (some of which will be displayed alongside the installation).

Monkman invokes Picasso as a representative of Modernity and “the archetype of European male dominance and aggression.” “The bull was an extension of his penis,” he says. Picasso, along with the other Modernist painters, extracted from Indigenous art, Oceanic art and African art, but that influence was purely aesthetic, Monkman says. “For the last number of years, I’ve been looking at that period of Modern art and using the metaphor of how the picture plane was flattened as a way to look at how Indigenous cultures were compressed through the last 150 years of modernity.”

The values inherent to Modernism were about turfing the past in favour of something new. When Europeans applied that philosophy to Indigenous cultures, it meant assimilation, residential schools and erasing histories. “It didn’t have the same liberating qualities,” Monkman says. Modernity is celebrated as a violent, fractious period of invention and enlightenment, but The Rise and Fall of Civilization asks us to remember that, for many cultures, the violence it represents was real.