Jon Sasaki plans to build a plane—the Popular Mechanics Woodhopper—this summer during his time in the Glenfiddich Artist-in-Residence Program in Scotland. 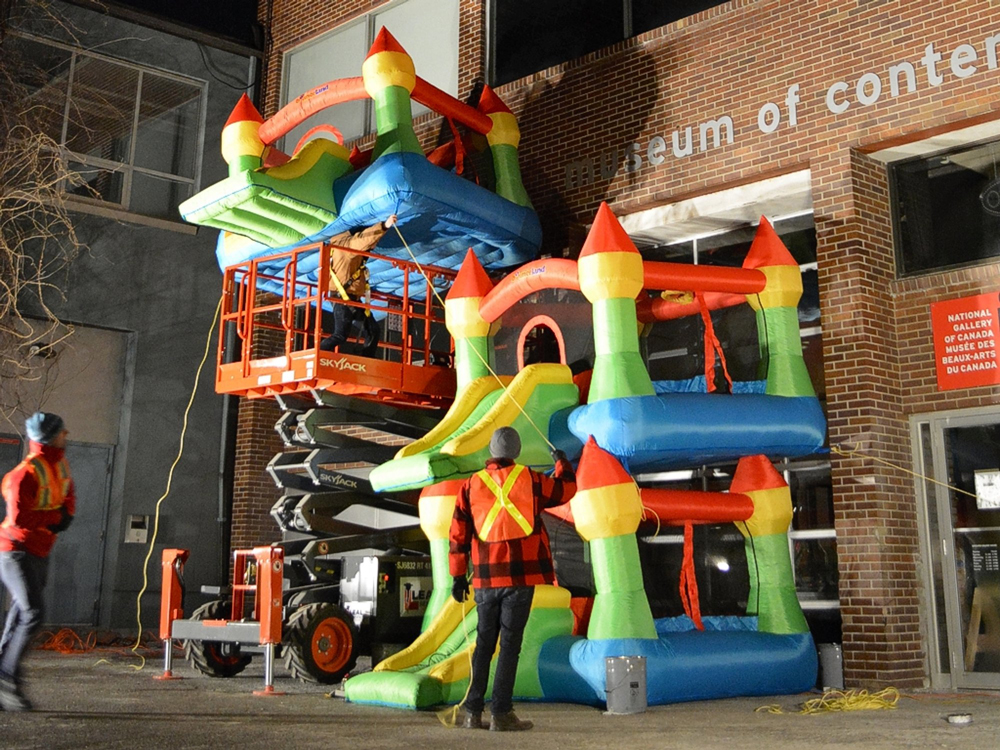 Jon Sasaki, In a real dark night of the soul it is always three o’clock in the morning (maquette), 2014.

Jon Sasaki I Weighed Myself Before and After Making This Piece, 2012. Courtesy Jessica Bradley Gallery.

On the cover of the November 1981 issue of Popular Mechanics, a small inset image shows an impossibly slim plane with the subtitle, “Build our exciting full-size plane for only $900.” Sure enough, the article describes the construction of a 154-pound ultralight plane—the PM Woodhopper—that, luckily for the uninitiated, doesn’t require a pilot’s license to operate. The entire magazine stands as a testament to DIY’s most fervent practitioners, but the possibility of building an aircraft pushes the pastime into the realm of the bewildering. Who could possibly want to risk life, limb and almost $1,000 to build a questionably useful, but assuredly dangerous, plane? Enter Jon Sasaki.

The Toronto artist came across the plane instructions over a decade ago when working on another project. “I built a tube radio using one of the plans from the 1960s or 70s, and I remember feeling such a sense of accomplishment when I plugged this thing in and it actually worked, using these parts I had scrounged from here and there,” he told me recently. “I came across the plans for this airplane, and it just seems kind of preposterous, building a $900 airplane using hardware-store materials. It seems too good to be true.”

The opportunity to build the plane finally came last week when Sasaki was awarded the 2015 Glenfiddich Artist-in-Residence Prize. He will head to Dufftown in June and work until September building the aircraft, using tools and materials available in and around Dufftown and the distillery. “I’ll construct it so it could, conceivably, be an airworthy airplane,” he explained.

Sasaki routinely elevates the fool’s errand into a work of art. In his performance Bouncy Highrise, which ran as a part of Villa Toronto’s programming in January, the artist and a small team of installers attempted to stack five bouncy castles over the course of an hour to create a monumental sculpture. “On paper that performance seemed very simple: stack up five bouncy castles and make a high rise out of it,” he said. “But the simple description belied some of the other issues I was going to run into. So the piece itself was really more about solving those and overcoming the obstacles.”

Building a PM Woodhopper and assembling a highrise of bouncy castles are both endeavors of a certain strain of extremism. Sasaki acknowledged that each is “an absurd task that I go into knowing it’s absurd, but follow through with anyway.” Yet, while these projects appear to have little in common with the world of weekend woodworkers and instructables enthusiasts, both Sasaki and Popular Mechanics traffic in the hobbyist’s most essential element: a serene pragmatism in the face of the insurmountable.

Just look at the description Popular Mechanics offers for the PM Woodhopper. The article repeatedly underscores the project’s accessibility and cost effectiveness. Admittedly, the process seems complex and rife with possibilities for things to go awry—the estimated time commitment is some 300 hours of work, and the required materials include an ultralight engine, two-ounce Dacron and large swathes of Styrofoam. But Dacron is a fairly common “lining material for ladies’ dresses,” the publication assures readers, and vertical-grain, kiln-dried Douglas fir is found easily enough. And, although new fliers might be unfamiliar with some of the “eccentricities” they face when using a taildragger for the first time, the article helpfully provides some tips to keep subscribers from plunging to an early grave. (Taildraggers, Popular Mechanics sagely notes, are more wind sensitive than the usual tri-gear aircraft.)

It’s a sensibility that Sasaki also embodies. Anticipating the difficulty of acquiring the necessary materials, Sasaki allowed that “negotiating for these things might become part of the project. One of the items on the material list is a Styrofoam sheet, and if the only one I can find is on the side of someone’s barn, maybe I can do some persuading, or some trading or something. Like Christo and Jeanne-Claude’s Running Fence, the negotiations might become a big part of the piece.”

Even negotiations have their limitations, though. “I don’t know where I’m going to find an ultralight engine,” he admitted, “but maybe something else can be adapted. At this point I’m leaving that open.

“I just felt this could be an absurd attempt at building something extraordinary.”