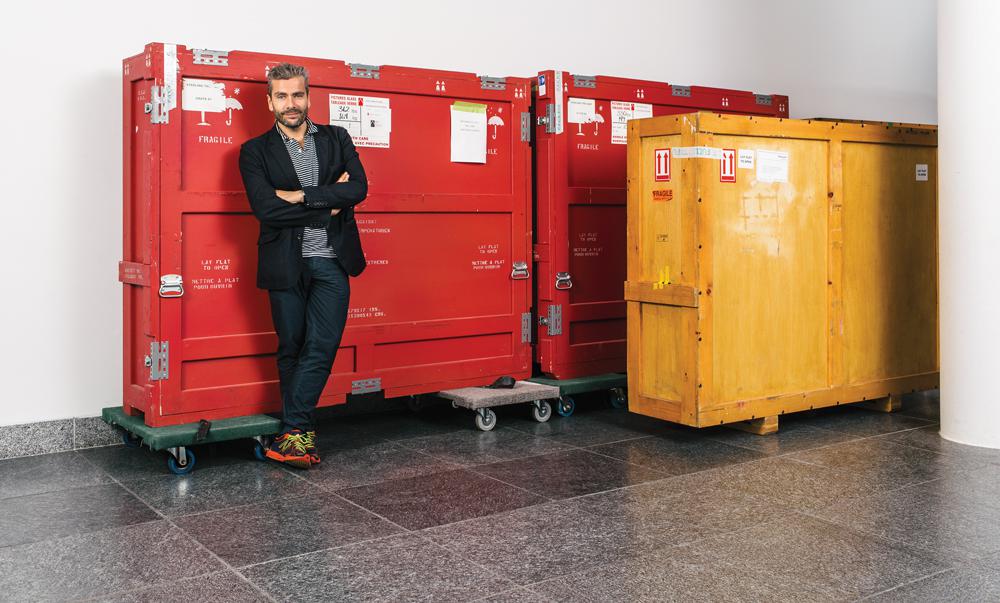 The security guard has a gift for John Zeppetelli in his new office at the Musée d’art contemporain de Montréal. It is Zeppetelli’s 52nd birthday and his wife has sent him a sculptural arrangement of live, ornamental artichokes. It is early September and Zeppetelli has been director and chief curator of the MACM for less than a month.

Zeppetelli comes to the position after seven years at DHC/ART Foundation for Contemporary Art in Old Montreal, where he had been chief curator since its inception. As he poured mint tea, he admitted that his old job was “very difficult” to leave. At the privately funded foundation, Zeppetelli had an unprecedented combination of liberty and resources. He used them to make DHC/ART a platform for top-tier international contemporary art exhibitions by the likes of Sophie Calle, Jenny Holzer, Christian Marclay, Thomas Demand and, most recently, Cory Arcangel. Zeppetelli curated them all.

Aware that the MACM was seeking a new chief of staff, Zeppetelli at first had no intention of putting himself forward. Then his name appeared in an article in Le Devoir that discussed possible candidates, and Phoebe Greenberg, DHC/ART’s director and founder, surprised him by saying, “I know you well enough to know that if you don’t apply, you’ll regret it.” He waited until he was courted by members of the MACM’s board before officially throwing his hat into the ring.

Zeppetelli assumed posts that were vacated when former director Paulette Gagnon and former chief curator Marie Fraser resigned, reportedly due to friction with the controversial chairman of the MACM’s board of directors, Alexandre Taillefer. Taillefer is a growth capital entrepreneur and was credited with saving the Opéra de Montréal from financial ruin before coming to the MACM. Under his new watch, Taillefer promised a makeover. The museum’s signature Quebec Triennial has already been amalgamated with the previously independent Biennale de Montréal.

For many, Zeppetelli’s appointment has elicited a sigh of relief. He is a born-and-raised Montrealer who is also a dynamic, internationally savvy curator. If the MACM wants to increase its audience, here is someone who can do it without crass populism or abandoning the museum’s Quebec-focused mandate.

The dramatic aspect of the museum’s new start is its proposed $44 million renovation (scaled down from $80 million under Gagnon’s plan). It would see the MACM close for up to two years, beginning in April 2015. Government funding is still not guaranteed, but Zeppetelli is optimistic. “We have to rethink our MO completely,” he says. “We have to think about doing off-site work, and doing a very different kind of programming.”

A more dynamic, ephemeral slate of public programs excites Zeppetelli. He invokes his time at the Institute of Contemporary Arts in London in the late eighties and early nineties as a model for a lively art institution. And he is excited about changes to the building: “We need to lighten up. We’re on this beautiful site, but we have to tweak the building, rethink the flow of the spaces.”

Zeppetelli will be delegating a considerable amount of curating to his staff, but he promises to “get [his] hands dirty eventually.” His real work now is to imagine the future for the MACM and drum up support.

“My job is now this endless, missionary zeal that I have to transmit to people. We have to make a case for the relevance of contemporary art to a variety of people, not just the initiated and the cognoscenti. We’re entrusted with the caretaking of a massive cultural patrimony for generations to come. It’s extremely daunting, but it’s also enormously joyous and I’m really honoured to be here.”

This is an article from the Winter 2014 issue of Canadian Art. To read more from this issue, visit its table of contents or—to read the entire issue—pick up a copy on newsstands, the App Store or on Zinio until March 15, 2014. To get every issue of Canadian Art delivered straight to your mailbox, visit canadianart.ca/subscribe.