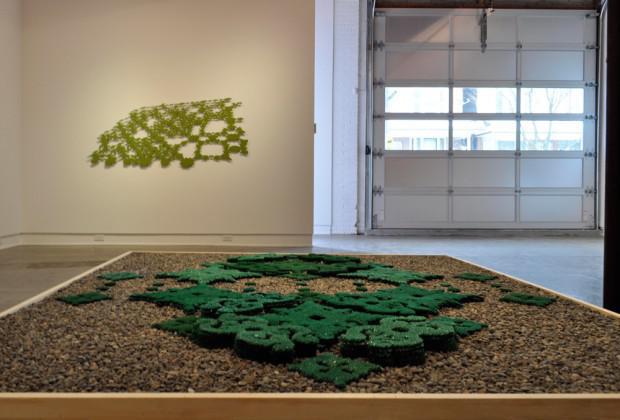 There is no coming to terms with death. Death is monstrous, and no philosopher has ever been of the slightest help in softening its blow or cradling that blow in a usable or nurturing context.

When death comes to someone like Jeannie Thib—an artist blossoming into full intellectual and aesthetic maturity when she succumbed, at age 58, to breast cancer—a certain ruin opens like a rent in the universe, an uncauterizable wound.

Thib died on October 26. There is a memorial exhibition on this month—titled “Imprint”—at Katzman Contemporary, Thib’s Toronto dealer, which not only offers a glimpse into what has been lost with Thib’s death, but also serves to prompt one’s own trajectory of recollection and revisitation back over the artist’s work of the past 20 years.

It is strange how an artist—a good one—can turn up everywhere. It takes so little to trigger memory. I looked through the frost patterns on our sunroom window one freezing morning last week and marvelled at how the frost had appeared to embroider and thereby essentially redesign the tool shed standing just outside the window. I made a photo of it, because it looked enough like Thib’s modified-ice-hut work, Cache (2008), to prompt my revisiting of that work—a work I never saw in person—and the rest of Thib’s remarkable production.

Cache was a temporary, site-specific work, made for the annual Ice Follies on Lake Nipissing, near North Bay—which was where Thib was born. It involved her enclosing an already existing ice hut in a membrane of frost-like, semi-translucent white tarp made of fabrene, cut—as was usual with Thib—in a repeated ornamental pattern that continually modified and was, in turn, continually modified by changing light conditions and intensities. There was much about Cache, I think, that was quintessential Jeannie Thib.

For Thib, pattern was substance, not décor. I remember being entranced by the power masquerading as delicacy inherent in works on paper I first saw back in the mid 1990s at Toronto’s Leo Kamen Gallery: immaculately silkscreened works (any enactment of Thib’s craft was always impeccable) such as Archive (1995), Blueprint (1995), the handkerchief “fossils” wickedly called Flutter (1997), Augur (1997), and the large, majestic Baudelaire’s Mistress (1998)—this last being a kind of preview of the architecturally scaled work that would follow.

Similarly, her exquisitely conceived and consummately made glove-works, Geographica (1995) (“silent little gloves, Snow-White immaculate in their vitrine,” I once wrote about them), Manual (1997) and Model/Mimic (1997), in their beautifully fabricated museum cases, led the way to the proliferation of Thib more fully embracing, over the next decade, the territories of museum space and public space.

I remember how bowled over I was by the sheer spatial reach and theatrical performance of Thib’s Fret (2000), a 9-foot-by-20-foot black neoprene rubber curtain (or veil), the whole baroquely aerated with a laboriously cut-out design, harvested by the artist from a 19th-century Italian velvet pattern with shapes representing olives, grapes, fern fronds, sheaves of wheat, a lily and a crown.

“There is a sense,” I wrote in the catalogue for the 2004 KWAG exhibition “De Luxe: Varieties of Transitional Light,” “in which Thib has deliberately positioned Fret as an architecturally scaled, emotively ambiguous hinge, a spatial and effective watershed. Viewed in a certain way, the work is clearly a delicate veil (intimate, labour-intensive cutting, albeit extrapolated into an epic matrix), with a lace-brut final effect. Thib points out the degree to which the work is ‘pushed to the edge of discomfort,’ its acrid rubbery smell somewhat demystifying its romantic, graphic loveliness.”

“Fret,” I continued, “is a singularity, to use Louis Kahn’s term, in essence a placemaker, a generator of gently optical architecture constructed by the spatial discernment of our eyes.”

In Thib’s hands, the decorative became strong and inhabitable, delicacy became ruminative, precision resulted not in curtailment but in an enhanced expressiveness, and texture became something akin to utterance. She progressed—so strongly and with a heady kind of quiet but confident determination—into the recalcitrant spaces of the public realm with works like Simili (2006), a witty arrangement of cut faux-grass carpet, as well as Façade (2006), MOTH Gardens (2006) in Downsview Memorial Parkette in Toronto, and Knot (2012), the latter a deliciously complex granite knot at Metrogate Park in Scarborough. In these works and others, her penchant for precision became monumental while her sense of lightness, delicacy, play, respect for the past and for the nature of materials increasingly became a strong language for the building of a more beautiful and more satisfactory world.

I don’t exactly know why these words from poet Anna Akhmatova remind me of Jeannie Thib, but they do:

Then helplessly my breast grew cold,
But my steps were light.
I pulled the glove for my left hand
Onto my right.

“Jeannie Thib: Imprint” is on at Katzman Contemporary in Toronto until February 18. A survey of Thib’s work is also on view at the Charles H. Scott Gallery in Vancouver beginning on February 25.

Note to the reader: This article was updated on February 21, 2014, with information about Thib’s Vancouver survey.