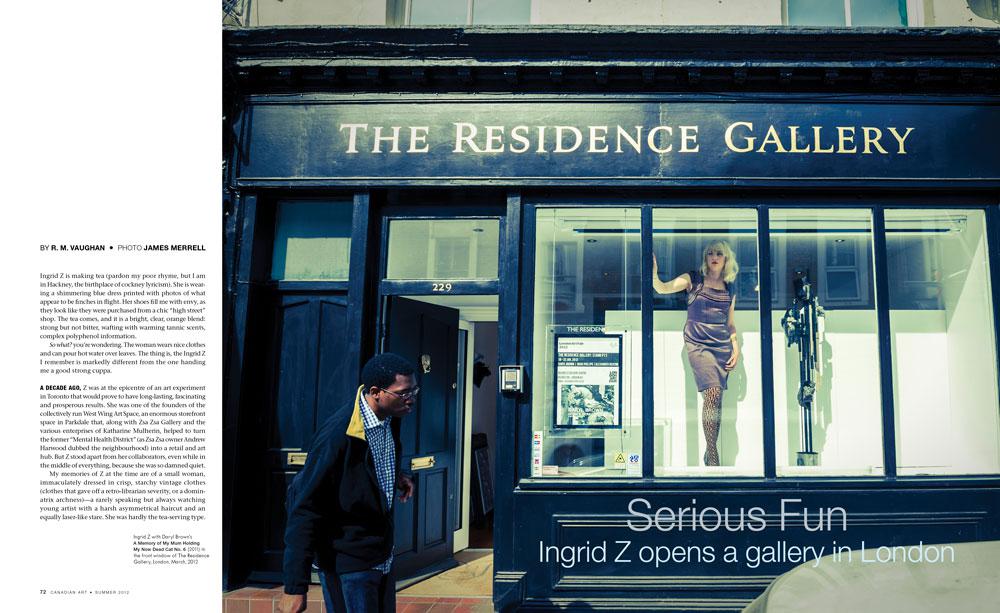 Ingrid Z is making tea (pardon my poor rhyme, but I am in Hackney, the birthplace of cockney lyricism). She is wearing a shimmering blue dress printed with photos of what appear to be finches in flight. Her shoes fill me with envy, as they look like they were purchased from a chic “high street” shop. The tea comes, and it is a bright, clear, orange blend: strong but not bitter, wafting with warming tannic scents, complex polyphenol information.

So what? you’re wondering. The woman wears nice clothes and can pour hot water over leaves. The thing is, the Ingrid Z I remember is markedly different from the one handing me a good strong cuppa.

A decade ago, Z was at the epicentre of an art experiment in Toronto that would prove to have long-lasting, fascinating and prosperous results. She was one of the founders of the collectively run West Wing Art Space, an enormous storefront space in Parkdale that, along with Zsa Zsa Gallery and the various enterprises of Katharine Mulherin, helped to turn the former “Mental Health District” (as Zsa Zsa owner Andrew Harwood dubbed the neighbourhood) into a retail and art hub. But Z stood apart from her collaborators, even while in the middle of everything, because she was so damned quiet.

Perhaps, at West Wing, she served a more nurturing, maternal function than I knew of—because rather a lot of young artists from West Wing (most of them men, plus ça change) have gone on to big careers. From such lackluster climes emerged Paul P., Joel Gibb, Tasman Richardson, Jubal Brown, Si Si Penaloza, Keith Cole, Luis Jacob, Karen Azoulay and the late, wonderful Will Munro—to name but a few.

“I probably seem like a more approachable person now than I did when I was in Toronto,” Z admits with a laugh. “I was just as hard-working as I am now, but I was kind of in the background at West Wing. I was shy, and I still am. So I made everything into a performance, even the way I spoke,” she says. “I was always feeling alienated in Toronto. I hid. When people visit me here, people I barely knew in Toronto, they say I seem like a different person. It’s like the ‘on’ switch got clicked when I left Toronto.”

Perhaps it is also true that the Ingrid Z sitting at a shiny new desk at The Residence Gallery, a space she owns and operates, could only have arrived at this point in her life via her experiences at West Wing. There was an aggressive, just-do-it-yourself mood there, a contempt for the coziness (and cozy art) that abundant funding sometimes inspires—a distrust that Z still holds dear.

“I have never depended on grants, for anything,” she says. “Any space can be a gallery space; I turned my house into one! And the time to fill out one of those grant forms—forget it. I don’t support cutting arts funding, I just have a problem with where they put the money in the first place.”

But don’t get her wrong: Z does not romanticize poverty or struggle. Her biography simply won’t allow it. “I moved to London in 2003. Originally, I wanted to do an MFA in Scotland. So I went on a trip to Scotland to see if I wanted to live there. At the time, I had a friend living in London, so I came over. As soon as I got here, I knew: I’m not gonna go to Scotland! When I moved here, I had many different jobs, but it also felt like, for the first time, I woke up, I started living. I went totally off the rails, partying all the time, meeting new people, experiencing everything I could, having wild adventures. I was living in Camden Town, which was full of punks, and we’d explore derelict buildings in the East End.

“In England, there are squatters’ rights,” she adds. “We found a Victorian mental hospital in Whitechapel—a ginormous place. It was like a palace, with a smashed grand piano, all this light and a massive atrium. It was as big as Tate Modern. We called it Fuckingham Palace, and I opened the Tate Post-Mortem. But then I had a lot of deaths in my family—four family members died in close succession—and while I was away the whole thing got shut down by the police.

“All this definitely gave me a renewed perspective on life and art-making,” she says. “I have become more interested in being a conductor of sorts, or a choreographer producing recitals of other artists’ work in my gallery. I feel like I’m cheating if I don’t make something. Cheating death.

“I realized after all that effort—and we put a lot of effort into our palace—that I wanted something more sustainable. I thought, ‘I’m going to do this for real.’ I found a shopfront, right across the street from here, and I had a whole bunch of art-gallery jobs going at the time too—I was learning how to run a business.

“It wasn’t really even a plan; it was something I needed. I needed to do this,” she says. “I put my money into a two-year lease, and then had shows every two weeks—well over 100 shows, one after another. My lease ran out, as did my money, and I was living in a verger’s cottage in Hackney Wick, so I moved all my stuff to the top floor of the cottage and turned the entire downstairs floor into a gallery. The shows then were longer and fewer, but I kept it going.

“I got into a London paper,” she continues, “which changed things, because I was doing everything secretly at the time. The priest found out, and he was okay with the gallery, but then he had a nervous breakdown or something, and I got burgled five times, and I got served a demolition notice, and the water and electricity stopped working.

“During all this, around 2009, I inherited some money, and I had saved some money, so I thought, that’s it, I’m buying something—something that is my home, my gallery, and that makes a little money [Z rents part of her building to visitors]. I wanted my own little ecosystem. And here I am. The Residence Gallery. I was 24 when all this started, and I’m 33 now. But I always feel like there’s so much I haven’t done.”
Phew. Z’s path to rebuilding in Hackney, as long-winding (and, by the sound of it, great fun) as it was, strikes me as anything but accidental.

Comparison is odious, but Hackney 2012 is Parkdale 2001. The streets surrounding Z’s gallery are dotted with “off-licence” betting shops (one of the first enterprises attacked in the 2011 London riots, because they are, as one London friend put it, “where kids see their family grocery money disappear”), liquor stores, on-every-corner kebab shops (the London equivalent of Tim Hortons), taxi-driver cafes, pool rooms, heavily curtained “spas,” “Asian” grocery shops (in Britain, anyone from north of Australia is “Asian”), car-repair concerns and tire sellers…and, now and then (and likely more and more soon), an organic bakery, a trendy florist or a hipster coffee shop.

For the non-Londoner (and I dare say the non–East Ender), The Residence Gallery is damned hard to find. Bordered by elevated train bridges, the garbage-strewn Regent’s Canal, and run-down housing, the gallery just suddenly pops up, on a cleaned-up mini–high street, cute as a cupcake.

The front of the gallery is attractive and inviting, painted in a midnight-black gloss and decorated with gold lettering installed by a local craftsman (one of the last letterers left in the East End). When I visit the tiny but tidy gallery, a series of tall, mixed-media, messy-on-purpose sculptures by the London-based artist Daryl Brown is on view, and sturdy dark-wood cabinets in the back space offer a collection of monster-mash porcelains—Royal Doultons via Tim Burton—created by the Kentish artist Theresa Fox.

“I think I’m contributing something different to the London art world,” says Z. “I bring a way of doing things, a do-it-yourself spirit. There are not many other galleries here that do everything themselves. Or the people running them find it very important to get a Master’s degree first, from the Royal College or wherever, which kind of gives them a brand.

“I don’t have that kind of branding,” Z admits. “London is interested in me, but I don’t know if they know what to do with me. London demands confidence. It’s a closed society, if you’re scared of it. I’ve never been snubbed. You just have to talk to people, not be afraid. You have to make the first move in London, but you also have to know when to stand back.

“I do bring Torontonian or Canadian artists—I just had Brad Phillipshere,” she says. “I’ve shown a lot of Canadian video artists, and I’ve shown Canadian artists whom I never knew in Canada but whom live here now. But I’m not on a mission to show Canadian artists—it’s just natural that I do. My curatorial practice is very artist-led. I’m trying to take the vitality of what we did on Queen West years ago and inject some life into London’s money-led gallery system. I work on a very instinctual level.”

So Ingrid Z’s career is now, nicely, at a full-circle moment. She is a Canadian in London, but also very much a Londoner. She shows Canadian work to Londoners, and knows exactly how to get this distracted population to look at Canadian art, but her gallery is not a CanCon pavilion, a Canada House adjunct. She knows what she likes, and she knows what sells. Most of the time, there is no difference. She is blunt about her trajectory, and has a long-term business plan.

As for possible credibility issues, the “sell-out” downside to her punk-to-proprietor narrative? Well, nobody’s life is a straight line. And only people who don’t understand (or need to understand) money ever talk about “selling out.” Furthermore, Z is upfront about her ambitions. She wants to make a living.

We finish our tea and I ask Z one last question, the one I am most reluctant to ask—being at least 15 years older and having built and rebuilt my own life many times over, I already know her answer. But ask I must: archetypal narratives make for archetypal questions. Someone like Z, with years of door-busting behind her, must have plenty of second thoughts?

“I’ve had to sacrifice my own art practice for the last two years, while learning how to do administration and accounting. Not completely, but a lot,” she admits.

“But I see that I am going to do this my whole life, so what is two years? I’ve learned that it pays to take a risk, and money’s not the only currency. And not to pay attention to people who resist what you are trying to do.

“But the last thing I want,” she adds, “is for someone to think ‘Oh, she’s made it—I thought she was just a person who’d get drunk at parties and roll around on the floor!’ I want to promote the truth that you can have fun and it doesn’t make the work any less serious. That’s not the status-driven London way, and I think that makes me valuable to this society.

“I take my fun quite seriously.”