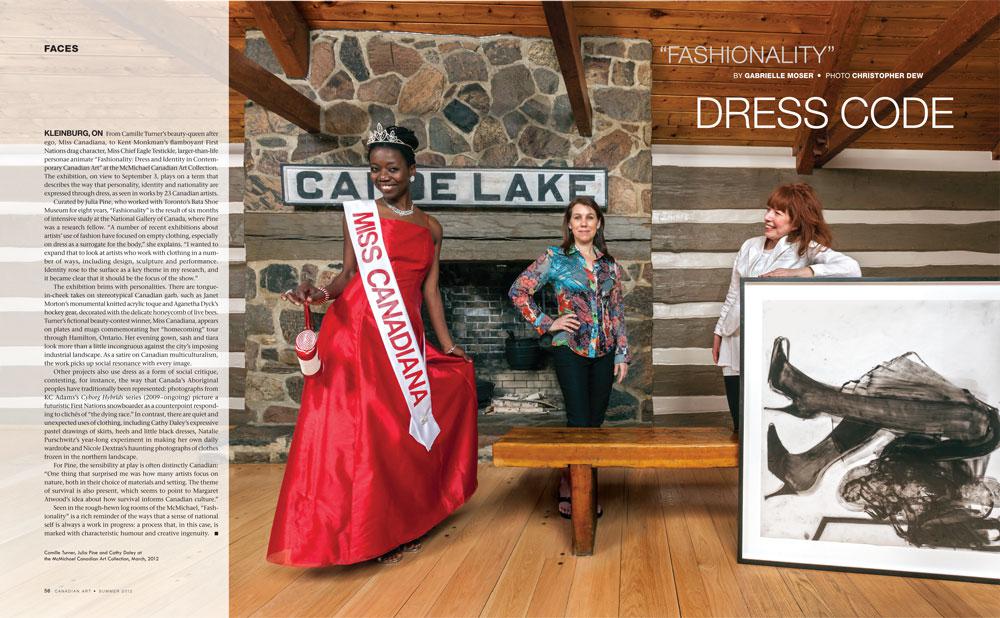 KLEINBURG, ON From Camille Turner’s beauty-queen alter ego, Miss Canadiana, to Kent Monkman’s flamboyant First Nations drag character, Miss Chief Eagle Testickle, larger-than-life personae animate “Fashionality: Dress and Identity in Contemporary Canadian Art” at the McMichael Canadian Art Collection. The exhibition, on view to September 3, plays on a term that describes the way that personality, identity and nationality are expressed through dress, as seen in works by 23 Canadian artists.

Curated by Julia Pine, who worked with Toronto’s Bata Shoe Museum for eight years, “Fashionality” is the result of six months of intensive study at the National Gallery of Canada, where Pine was a research fellow. “A number of recent exhibitions about artists’ use of fashion have focused on empty clothing, especially on dress as a surrogate for the body,” she explains. “I wanted to expand that to look at artists who work with clothing in a number of ways, including design, sculpture and performance. Identity rose to the surface as a key theme in my research, and it became clear that it should be the focus of the show.”

The exhibition brims with personalities. There are tongue-in-cheek takes on stereotypical Canadian garb, such as Janet Morton’s monumental knitted acrylic toque and Aganetha Dyck’s hockey gear, decorated with the delicate honeycomb of live bees. Turner’s fictional beauty-contest winner, Miss Canadiana, appears on plates and mugs commemorating her “homecoming” tour through Hamilton, Ontario. Her evening gown, sash and tiara look more than a little incongruous against the city’s imposing industrial landscape. As a satire on Canadian multiculturalism, the work picks up social resonance with every image.

Other projects also use dress as a form of social critique, contesting, for instance, the way that Canada’s Aboriginal peoples have traditionally been represented: photographs from KC Adams’s Cyborg Hybrids series (2009–ongoing) picture a futuristic First Nations snowboarder as a counterpoint responding to clichés of “the dying race.” In contrast, there are quiet and unexpected uses of clothing, including Cathy Daley’s expressive pastel drawings of skirts, heels and little black dresses, Natalie Purschwitz’s year-long experiment in making her own daily wardrobe and Nicole Dextras’s haunting photographs of clothes frozen in the northern landscape.

For Pine, the sensibility at play is often distinctly Canadian: “One thing that surprised me was how many artists focus on nature, both in their choice of materials and setting. The theme of survival is also present, which seems to point to Margaret Atwood’s idea about how survival informs Canadian culture.”

Seen in the rough-hewn log rooms of the McMichael, “Fashionality” is a rich reminder of the ways that a sense of national self is always a work in progress: a process that, in this case, is marked with characteristic humour and creative ingenuity.