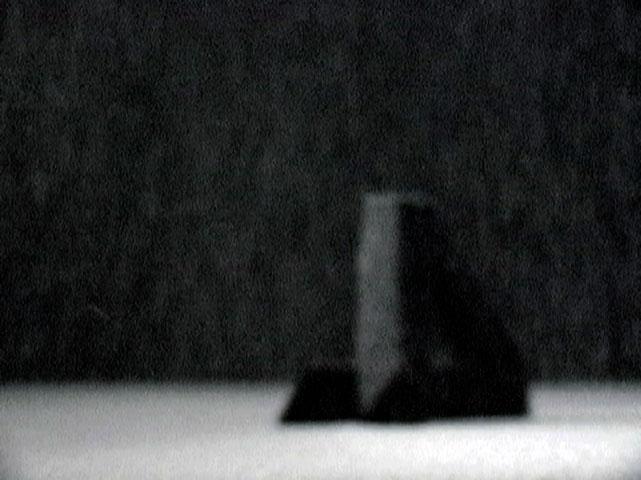 The work of Erin Shirreff requires patience. To some that might seem anathema, immersed as we are in the all-consuming speed of the digital-media age. Yet given time, what the British Columbia–born, Brooklyn-based artist (who was recently awarded the 2013 AIMIA AGO Photography Prize) manages to do in her serial photo works, sculptural installations and video projections is vital. Shirreff creates contemplative zones that test our ability to sink in and experience what she has called “a drawn-out encounter” with image and form.

And a good test it is that Shirreff’s art offers. By blurring hard and fast distinctions between image and object, Shirreff establishes a sort of perceptual grey zone that not only questions our subjective relationship to media, but also the ever-changing affect of experiencing art. The blurring can unfold in the slow-resolve presence of the still photos in her animated silent videos, as well as in the material/shadow play of her site-specific sculptural works.

Filmmaker and writer Michael Vass delves deeper into the sources and strategies behind Shirreff’s work in his feature for the Spring 2014 issue of Canadian Art, which hits newsstands, the App Store and Zinio on March 15. Until then, excerpts from three of the artist’s essential works offer a view of her durational aesthetic, where meaning and understanding is subtly revealed in an orchestrated play of absence and presence, darkness and light.

One of Shirreff’s earliest video works, Sculpture Park (Tony Smith) is based on a study of five outdoor works by iconic sculptor Tony Smith. Drawing on photos culled from books and the Internet, Shirreff constructed maquettes based on each of Smith’s monumental sculptures. (This excerpt focuses on his Spitball from 1961.) There’s a kind of melancholic yet mysterious presence to the black forms of Shirreff’s sculptural models as they slowly resolve against the darkness in a storm of artificial snow. Shirreff intends this not as a critique to Smith’s work, nor as an homage. Rather, it is meant as a signal of the inherent flux of sculptural context and media perspective over time.

Ansel Adams, RCA Building, circa 1940 signals a fundamental shift in Shirreff’s approach to moving images. Working with a single source image for the first time, Sherriff re-photographed a reproduction of a black-and-white photo by Adams, resulting in a stop-motion animation that follows the course of natural daylight streaming through her studio window, at times amplified by alternating shutter speeds and exposure times. In the video, as Adams’s image gradually fades, then resolves, a kind of hypnotic rhythm takes hold. Yet hints of Shirreff’s material and conceptual layering remain in the fleeting impressions of light on an image locked in time.

A feature work in Shirreff’s 2013 AIMIA AGO Photography Prize installation at the Art Gallery of Ontario, Lake expands on ground covered in Ansel Adams, RCA Building, circa 1940. Once again starting from a still photo—this time a wilderness scene from a 1980s BC tourist brochure found in a thrift shop—Shirreff manipulates viewers’ experiences of the work through a meticulously composed play of light. Photographed with the added effect of hand-held lights and other analog effects, the video assembles a kind of sequential landscape of the mind.