The visibility of trans women in the arts has vastly increased in the past half-decade, but our sense of freedom has not 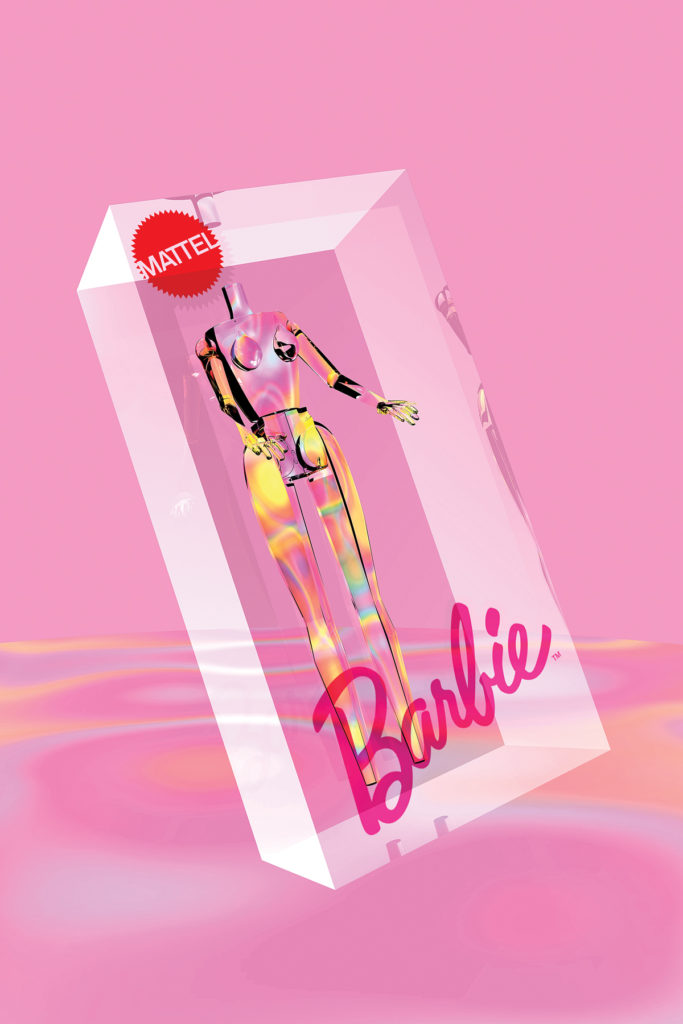 Make me walk, make me talk, do whatever you please
I can act like a star, I can beg on my knees
—Aqua, “Barbie Girl”

In her classic 1991 essay on the objectification of women, “Our Barbies, Ourselves,” Emily Prager writes, “No matter how much sexuality Barbie possessed, she would never turn Ken on.… There was a loneliness about Barbie’s situation that was always disturbing.” My Asian, transsexual body looks nothing like Barbie’s, even as she’s been updated for the 21st century, but I still love that line. It speaks perfectly to the representation of trans women in contemporary media constantly hypersexualized, never humanized. Consumed but never consummated. Fetishized yet never seen.

Last year, I was invited to read from my book, Fierce Femmes and Notorious Liars, at the Art Gallery of Ontario. One of the curators suggested that I do my reading from within an installation—behind the stanchion, as though I were a part of the display. As I read from my fantasy novel about a gang of trans vigilantes who beat up straight men for fun, I glanced at the audience from behind the ropes. Beneath their gaze, I felt unnerved, both invisible and exposed, like a doll on display with her mouth painted shut.

“Representation” has, in recent years, become both a pillar of contemporary liberal media values and a dirty word to many trans women writers and artists. Curators, producers and editors seek out trans women artists, actors and writers for the optics of “good representation”—that is to say, as tokens. As a result, the visibility of trans women in the arts has vastly increased in the past half-decade, but our sense of freedom has not. In being a trans woman of colour with a public audience, there is a sense of being watched, critically analyzed, of being placed on a wobbly platform with a long way down to fall. Representation thus becomes not liberatory, but rather dangerous and exploitative. Representation becomes, in the words of Black trans scholar Reina Gossett, a “trap door” that at once exposes trans women to violence and voyeurism while only appearing to offer us salvation.

This is in part, no doubt, because transsexual women’s bodies have historically been a site of intense psychological projection from many quarters. We have been targeted as pedophiles and rapists by political conservatives, decried as male interlopers by radical feminists and pathologized as narcissistic failures of manhood by psychiatrists. Even the contemporary queer rights and social justice movements, which are quick to trot out the trope of the “oppressed trans woman of colour” as a political symbol, can be treacherous waters.

The danger of representation as a value and practice in media/arts production is a question of what—rather than simply who—is being represented. Trans women, particularly trans women of colour and sex workers, have acquired an odd aesthetic value in the political theatre of social justice art and activism. Living at the intersection of transphobia and misogyny, we have become the poster children du jour of liberal and leftist agendas. Yet there is a danger on all sides for trans women who attempt to speak and create outside the confines of the proverbial stanchions that are placed around our participation in public dialogue. Perceived missteps are scrutinized and punished by so-called social justice warriors and feminists, who quickly turn to transphobic rhetoric to question our womanhood.

This rhetoric is in many ways legitimized by leading feminist voices, such as the celebrated Nigerian novelist Chimamanda Ngozi Adichie, who has repeatedly expressed the belief that trans women are somehow stained by the residue of male privilege. “A trans woman is a person born male and a person who, before transitioning, was treated as male by the world. Which means that they experienced the privileges that the world accords men,” wrote Adichie in a March 2017 Facebook post. While Adichie has also previously attempted to express support for trans rights, the above sentiment echoes those of the much more vociferously transphobic Julie Bindel and Germaine Greer and other trans-exclusionary radical feminists. Such feminists argue that trans women’s experiences of “being socialized as men” preclude us from understanding female oppression and make us dangerous interlopers in women’s spaces. Meanwhile, of course, trans women remain among the social groups most likely to experience employment discrimination, intimate partner violence, and murder.

No attempt by trans women to engage in self-representation, no matter how seemingly benign, seems to escape this intense dynamic of projection and criticism. In April 2015, Orange Is the New Black star and trans actress Laverne Cox posed nude for a now-iconic photo shoot in Allure magazine. While this was at first widely hailed by liberal and leftist media outlets as “progressive” and “groundbreaking” representation, Cox quickly came under fire not by conservatives, but by self-styled radical feminists. Canadian writer Meghan Murphy attacked Cox for upholding sexist beauty standards by “achieving a ‘perfect’ body, as defined by a patriarchal/porn culture, through plastic surgery, then presenting it as a sexualized object for public consumption.” 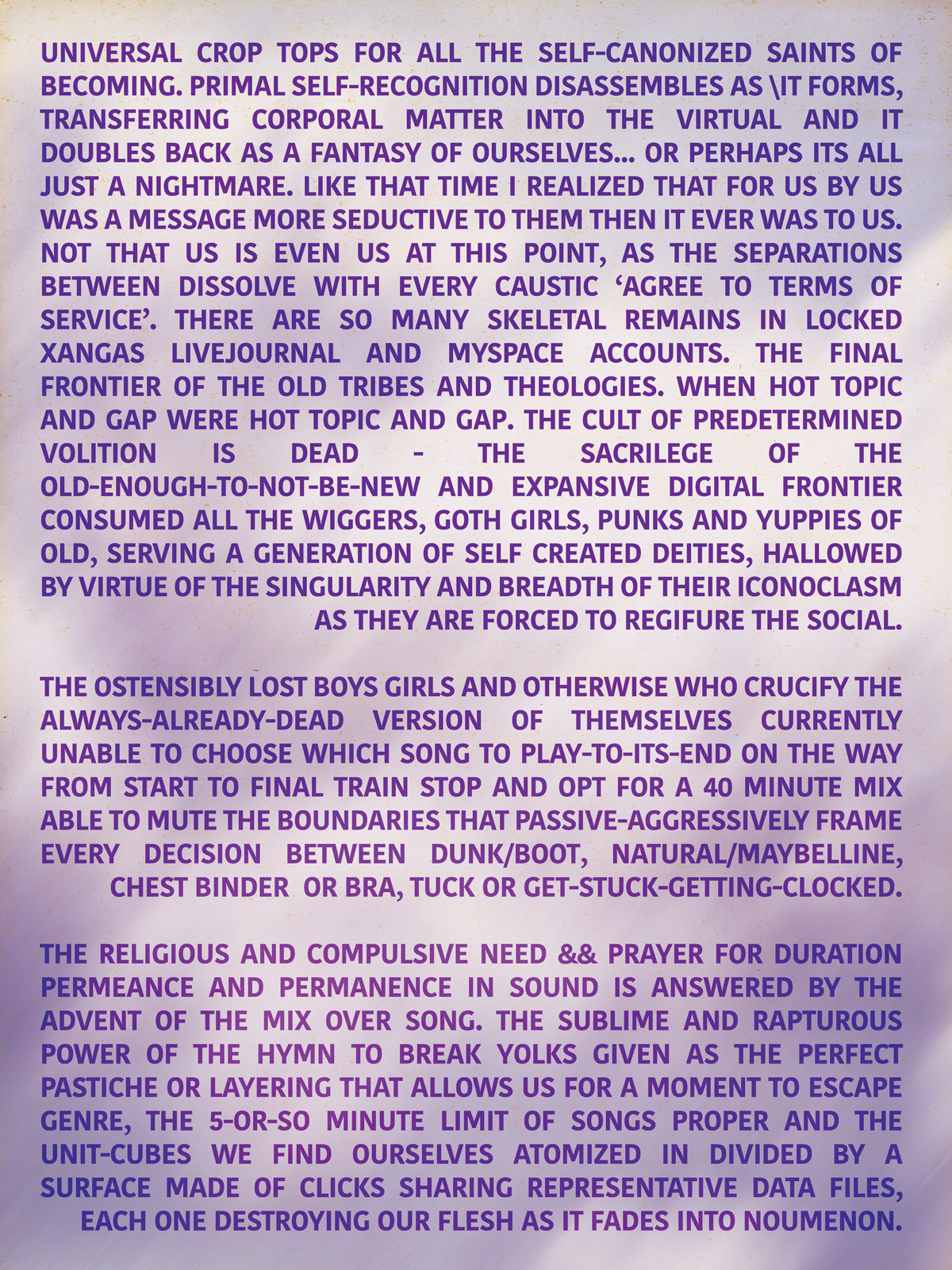 Juliana Huxtable, Untitled (Destroying Flesh) (from the series UNIVERSAL CROP TOPS FOR ALL THE SELF CANONIZED SAINTS OF BECOMING), 2015. Ink-jet print.

So trans women can’t win: we are always too masculine, too threateningly privileged or somehow also too feminine, too duped by the patriarchy. Writer and podcaster Morgan M Page writes, “Trans women have to not only be queer-literate (knowing queer social justice language), we have to be exceptionally good at using it. Any minor slip of language or politics and we’re labeled ‘crazy trans women.’” A crazy trans woman is one who cannot easily be fit into a political agenda. She is a broken doll. Trans women artists, then, are vulnerable to vicious public backlash for any perceived political missteps. Controversy, supposedly the lifeblood of the artist, becomes a source of potential harassment and bullying, particularly via social media.

Such was the case for Mykki Blanco, Black transfeminine rapper, poet and performance artist. Blanco has in recent years been a darling of the queer hip-hop scene for his daring exploration of race, gender, serophobia and other social issues. However, in late 2017, Blanco came under intense fire for his Twitter comments about bisexual artists who use coming out and performative queer politics as a way of demonstrating progressiveness and accessing “social justice clout.” As a result, Blanco experienced so much online backlash that he temporarily deactivated his Twitter account.

The key issue here is not whether Blanco’s criticisms were correct, or in today’s parlance, sufficiently “woke.” It is that in making a legitimate, if debatable, social commentary, a Black transfeminine, supposedly valued artist was punished and bullied for speaking his mind. In other words, his livelihood—always in jeopardy for transfeminine people—was threatened, while writers such as Adichie continue lucrative careers relatively unscathed by the consequences of their politics. Like dolls that no longer amuse, trans women are treated as disposable, something to play with, to break and throw away.

The spectre of the transsexual has become a rhetorical weapon in the hands of the political right and the political left. To the right, we are the embodiment of the corruption of traditional patriarchal values; the Pope himself has actually compared us to nuclear bombs. To the left, we are an objectified symbol of revolution or oppression, depending on whom you ask. What would it take to liberate trans women from the toxic prison of conservative, liberal and leftist “representation”? Well, let’s think about Barbie: What if she were a transsexual? What kind of girl would be hiding underneath that hard plastic skin and permanent Mona Lisa smile? What might she do if she weren’t always being watched? She might go to the mall. Buy cute sweaters and lipsticks in fun colours, even though she knows consumerism will never solve her problems. She might drink too much and dance too hard and kiss boys and girls she knows are bad news, because their hands and teeth are the only things that can make her feel. She might dream of the freedom it takes to be a softer kind of girl.

If trans women’s art and thought are ever to be freed from the machinations of other political and aesthetic agendas, we must also free our bodies. When we are no longer reliant on the goodwill of cisgender legislators, producers, curators and editors for our livelihoods and careers then we will have achieved the security we need to appear, to exist, in public as ourselves and nothing else. All this is to say, we need more than the double-edged sword of representation: we need power, the kind that tokenistic representation will never give to us. And until we get it, we will continue to live as Barbie does: trapped in someone else’s world and unable to escape…

This is post is adapted from the feature article “Representation” in the Spring 2018 issue of Canadian Art, which is themed on “Dirty Words.” 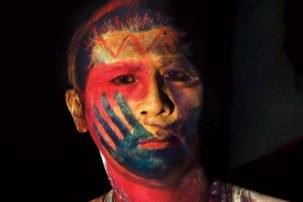