From the Archives: David Altmejd and the 2007 Venice Biennale 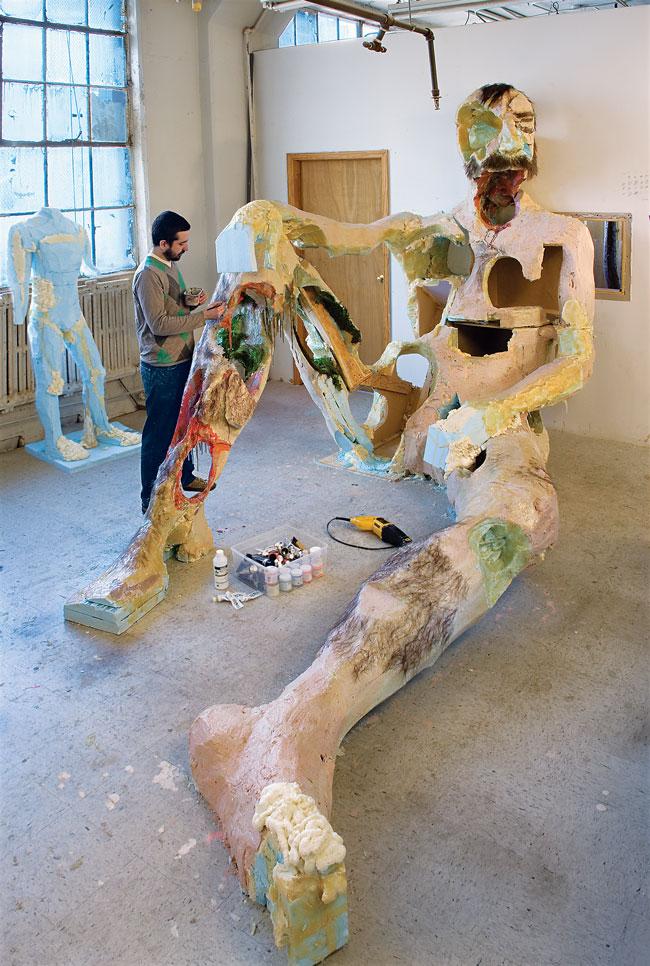 David Altmejd working on The Giant 2 in 2007; the sculpture is constructed out of bronze, steel, taxidermied birds, quartz, feathers and other materials / photo by Ellen Page Wilson courtesy of Andrea Rosen Gallery, New York, and Stuart Shave/Modern Art, London

In the lead-up to the 2013 Venice Biennale, which opens to the public on June 1, we have been digging through our archives to look at Canada’s past presentations there. In this instalment from our Summer 2007 issue originally titled “Giardini Birdland,” Christina Bagatavicius reflects on the development of David Altmejd’s work for that year’s event.

Those who have visited the Venice Biennale might recall the unusual character of the Canadian Pavilion. Built by Italian architects in 1958, the wood, steel and glass building is surrounded by lush greenery and discreetly nestled between the pavilions of Germany and Great Britain. Its design was inspired by the architectural rationale that a structure should be harmoniously integrated into its natural environment. In Venice, the space was built around an ancient tree encased in glass that sprouts in the centre of the room and shoots out through the pavilion’s spiralled roof. The walls are awkwardly curved to form an octagonal shape, with windows that allow panoramic views of the foliage outside. It is almost as if one has unexpectedly entered a treehouse- styled shrine to the great outdoors instead of an exhibition space.

For David Altmejd, the artist representing Canada at the 52nd Venice Biennale, the eccentricities of the Canadian Pavilion were a crucial starting point for The Index and The Giant 2, the two monumental sculptures he unveiled at the opening. When Altmejd, a native Montrealer, received the news that he had been selected for Venice by the Canada Council for the Arts following a successful proposal by Louise Déry, Director of Galerie de l’UQAM, he visited the space for inspiration.

Altmejd is fascinated by the architecture of strange and imagined spaces, from mythical labyrinths to complex minimalist sculptures to the secret hiding places invented by children. After visiting the pavilion, he was drawn to how “there was an ambiguous relationship between what is outside and what is inside.” Rather than playing down the building’s unusual shape, Altmejd was moved to transform it into an otherworldly aviary. The space, and the light of Venice, caused him to consider, as he puts it, how “I could shift the power over to the birds.”

At just 32, Altmejd has already established a reputation for his opulent fantasy worlds, in which glittering werewolf heads comfortably inhabit pristine geometric forms. His work draws on popular culture as much as it relates to the history of sculpture. He references the lavishness of the baroque movement, the glamour of Ziggy Stardust, 19th-century Romanticism and modernist architecture as well as the monsters that pervade B horror movies and science fiction.

Within an art-historical context Altmejd is difficult to categorize, in part because of the symbolic richness of his work. His practice has been related to everything from the minimalist sensibility of Sol LeWitt and Donald Judd to the fragmentation of the body in the works of Kiki Smith and Louise Bourgeois to the postmodern narratives of Matthew Barney and the intuitive vision of William Blake. Early on in his career, Altmejd looked to external sources for inspiration. By now, however, he has built up a complex iconography of images and materials that has allowed him to work in his own distinct visual language.

Over the last decade he has established this language by collecting an intriguing range of objects that have become motifs within his practice. The artist recognizes that there is a fetishistic quality to the way he works with materials. “Fetishizing precious-looking objects and wanting to display them and take care of them has always been very present in my work,” says Altmejd. “I used to collect crystals as a kid and I think I am still doing that.” Some of the recurring elements include bones, raw minerals, graffiti, Plexiglas, delicate gold chains, handmade birds, costume jewellery and silk flowers, as well as hair, resin and fractured mirrors. In the artist’s chimerical world, the grotesque and exquisitely beautiful intermingle.

Altmejd first rose to international prominence after participating in the Istanbul Biennial in 2003 and the Whitney Biennial in 2004. With the Whitney show, he grabbed public attention for the evocative way his sculptures displaced the mythical figure of the werewolf within architectural structures. As part of his contribution, two of his sculptural works, Untitled (Bluejay) and Untitled (Swallow), were exhibited in New York’s Central Park. These pieces were oversized, decapitated werewolf heads that glistened with crystals, pearls and rhinestones. Both of these enchanting creatures were contained within Plexiglas cubes, and their presence—enhanced by the natural setting—haunted unsuspecting passersby.

While the werewolf figure reflects cultural anxieties within the genre of horror, for Altmejd nothing is more disturbing than the creepy simplicity of a minimalist structure. His sense of worry concerning these forms stems from his interest in the Argentine writer Jorge Luis Borges, whose meandering tales of labyrinths and archives illuminate the uneasy relationship between infinite and finite spaces. Altmejd finds minimalist shapes eerie because of their never-ending, mazelike potential. Captivated by this Borgesian complexity, he explains, “I like to create spaces inside of objects because this suggests that spaces inside can grow infinitely.” The excesses of a Gothic nightmare could seem out of place within a minimalist tableau; however, in Altmejd’s work, the dissonant elements magically come together.

He began experimenting with this combination while studying for an MFA at Columbia University in New York. At one point, he built a table that completely overwhelmed his small studio. With barely two feet to spare on either side of the structure in an already claustrophobic space, his purpose- built display case became the foundation for his work throughout the semester. By itself, the table seemed somehow unfinished, so Altmejd began fabricating a range of objects that could activate the structure. As he recalls, “When I integrated organic grotesque elements, it was as if the whole thing became alive.” One of these handcrafted objects happened to be a werewolf head.

Werewolf 2 (2000) was one of the earliest sculptural works by Altmejd to fully embrace the potential of the werewolf figure. He started off by designing a complete monster, but soon fragmented the body into pieces and scattered them—like church relics—onto an intricate display structure that resembled a new-age sarcophagus. The werewolf ’s head was partially concealed in an L-shaped box that was covered by fractured mirrors. Altmejd describes the effects of the mirrors and how “I did not expect that it would act as a kaleidoscope. When you looked inside there were bits of fragmented werewolf head reflected infinitely within the space that gave it a weird disco, labyrinth, werewolf feel. That was the first time I found this combination really satisfying and beautiful.”

Altmejd’s practice is charged by an interest in energy-generating processes that reflect the cyclical transitions between life and death. For the artist, the werewolf represents a powerful state of becoming—the body caught in metamorphosis. He imagines that his sculptures immortalize this hybrid creature after it has undergone an intense transformation. The mutilated and decomposing remains are often displayed with crystals growing from their inner and outer surfaces—for Altmejd, this is something that suggests the possibility of regeneration.

Birds are also a recurring ingredient within Altmejd’s repertoire. Until recently, they played only a peripheral role. The Old Sculptor (2003) consisted of delicate architectural structures fabricated from mirrors and Plexiglas that were arranged on a platform alongside the dispersed remains of a body and a scattering of artificial flowers. This tableau was surrounded by a thin gold chain that appeared to be carried by a cluster of handmade painted birds. Altmejd introduced the birds as a convenient creation myth, a means of explaining away his formalist decisions and alleging that responsibility for the direction of the work resided within the piece itself.

Altmejd makes it clear that, previously, “the birds were in the works as a way of injecting life and energy but they were empty, mere decorations. In the Venice work they become complex entities.” In recent months, he has constructed a remarkable array of birds to fill the aviary—some specimens are made of bronze, others will be taxidermied and there will even be a flock constituted from slivers of mirror. Also included will be a darker breed of “birdman”—a figure plucked from ancient Egyptian mythology—dressed in suits. Altmejd’s fantastical ecosystem promises to overflow with anthropomorphic birds who will feed, breed and nest within an extraordinary sanctuary.

The title of the work, The Index, might refer to the aviary as a system for classifying bird species, but it also explicitly references Borges. Moreover, the index alludes to the stripped-down language of minimalism and reinforces the idea of the aviary as a structure for creating order as well as an untamed natural environment. Order and chaos, finite and infinite spaces and the blurred boundary between nature and what is kept contained—all are tensions that pervade this new work, situated itself within the great outdoors.

The architecture of The Index is fashioned from a maze of bridges, birdcages, concealed backrooms, jutting steel poles, endlessly reflecting shards of mirror and island-like platforms. In the past, Altmejd theatrically framed his works within display structures in order to keep each sculpture self-contained. For Venice, everything has changed because, as Altmejd explains, “I wanted to push limits and this is the first time in my work that you are going to be able to travel into the space. In my mind it’s still a sculpture because all of the elements are connected.” He has created an immersive environment in which visitors can walk through hidden recesses and trompe l’oeil structures; however, all of the sprawling architecture will overlap to form a single body.

In this new work there is a convergence of the key elements within Altmejd’s material lexicon. Even the severed werewolf head makes an appearance, this time in a supporting role as a birdfeeder. The one typically monstrous component to feature in Venice will be The Giant 2, an 18-foot colossus built from bone, resin, hair and mirrors. This second work, located in the back of the pavilion, is a habitat within a habitat; its inner recesses are designed to serve as an elaborate nesting ground for the birds. The giant’s insides are an organic architectural network made up of staircases, holes and corridors, all overflowing with wildlife. Here, in a clever inversion of Altmejd’s typical approach, a fantastical body houses a display of architectural elements. This seems to complement his belief that “Energy is what makes things alive, and I like to feel as if my sculptures become living organisms…to make huge intense living organisms is a way of making me feel like I really exist intensely through the work.”

Those who make the trip to Venice can revel in the visual extravagance of Altmejd’s imagination, which has come to life at this year’s biennale on an unprecedented scale.

This is a feature article from the Summer 2007 issue of Canadian Art.