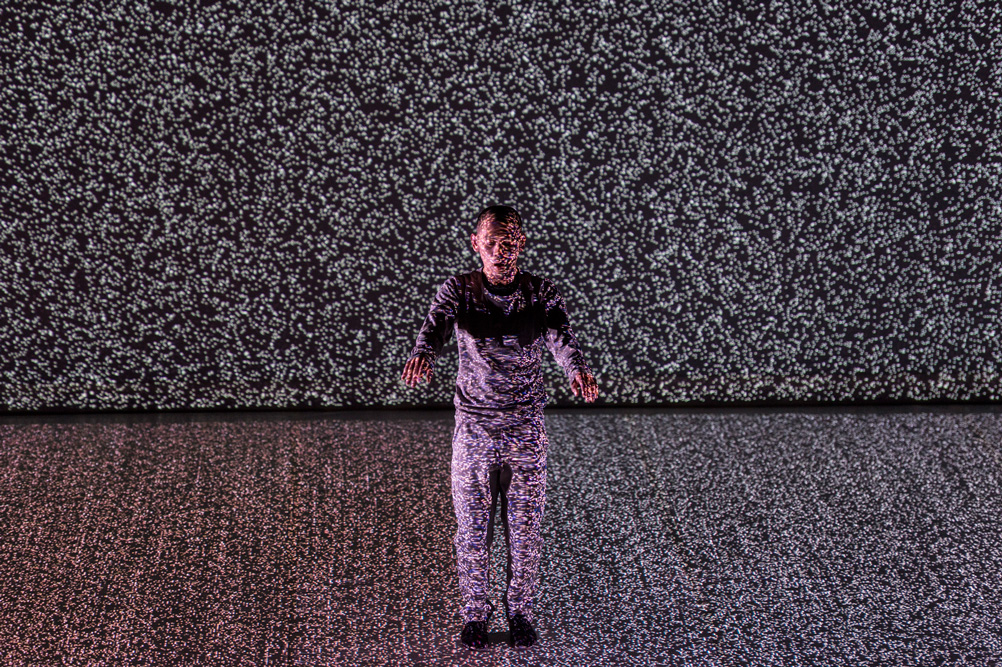 Art and technology: It’s a pairing that tends to raise as many quandaries as it does possibilities. Many artists have embraced the brave new digital world, producing works that bend real-virtual world boundaries of materiality, interactivity and community. Net.art, virtual reality, hacking and social media are just a few of the new mediums of aesthetic and critical concern. Institutions have also begun to redetermine their relationships with digital culture, most notably (and contentiously) in the Museum of Modern Art’s addition of 14 video games—Pac Man, Tetris and SimCity 2000, among others—to its permanent design collection in November 2012 (the museum has since added six more games and a vintage gaming console).

At the same time, it’s an accepted fact that technological research and development is in large part driven by everyday commercial demand. From the gadget fetish of the latest-model smartphone to the embedded marketing and personality branding of digital media to the techno-spectacle of a Super Bowl half-time show (or blockbuster exhibition—the Art Gallery of Ontario’s recent “David Bowie is” comes to mind), technology can have a dazzling effect on our critical judgment, artist or not. We know that any reasonable sense of meaning, desire and even belonging is being manipulated but we often don’t care—the product is just so damn cool.

With so many competing interests at play, it’s no easy task to parse what is really at stake when it comes to the ever-shifting borderlines between art and technology, let alone predict what the future may hold. Yet that’s exactly what a sold-out summit of technology experts, digital entrepreneurs, curators and artists from around the world attempted to do at Convergence: An International Summit on Art + Technology, held over a stormy and cold late-November weekend at the Banff Centre.

Presentations at the conference—co-organized by the Banff Centre’s director of visual and digital art, Jen Mizuik, and acting director of theatre arts, Casey Prescott—ranged widely, from Osaka-based robotics engineer Kohei Ogawa’s recap of the weird and wonderful world of android development in Japan (including the uncannily lucid “Telenoid Tom”), to recent visual-arts thematic residency leader Raymond Boisjoly’s decidedly low-tech experiments in provisional image-making and colonial critique via iPods, digital scanners and construction paper. Similarly, a series of installations (including the fascinating chaos of Neïl Beloufa’s coincident exhibition “Counting on People” at the Walter Phillips Gallery and a collaboratively produced sensor- and sound-activated bonfire with tree-line projections), as well as artist performances each evening, added an eclectic edge to the art-tech parameters up for consideration.

And though it’s impossible to offer a comprehensive review of everything that was said and done at Convergence, there seemed to be three general take-away categories that hint at the broad spectrum of ideas at play:

1. Art, Technology and the Market

In his conference-opening keynote address, Éric Fournier, from Montreal new-media and entertainment studio Moment Factory, traced a timeline of social technologies. People gathering around a fire 10,000 years ago, the reality spectacle of Roman gladiators and the television-centric bonding of the 1950s nuclear family all lead to a world connected by the computers in everyone’s pockets. The common factor, he suggested, is that technology is essentially a shared emotive experience, a platform for storytelling that, as Fournier put it, “gives goosebumps.” The sheer scale and sophistication of Moment Factory’s projects—including a destination-experience redesign of the Los Angeles International Airport, an interactive multimedia display on Antoni Gaudí’s La Sagrada Família Church in Barcelona and the Madonna half-time show at the 2012 Super Bowl—are testament to a booming commercial interest in this principle of technology as means to elevate collective engagement.

Still, nagging questions about the effects of blending art, technology and the entertainment business surfaced in the audience questions that followed: How do you separate knowledge from entertainment? What about the ethical/environmental issues raised by turning an airport into a destination for more travel? How do you level the difference between people experiencing a high-tech spectacle together, yet sequestered on their personal electronics? For Fournier, answers ultimately lie in the ability of technologies to push perspectives outside of the individual comfort zone of a digital frame and to create the need to see, relate to and, with luck one assumes, understand in person the value within and beyond the spectacle.

New York–based media artist and researcher Michael Naimark reviewed his groundbreaking experiments in “projection mapping” and “place representation” (including his Moving Movie media installations from the late 1970s and a proto–Google Street View mapping of the Banff hiking trails with a hybrid jogging stroller/stereoscopic 16 mm camera in 1993). It’s work that has made Naimark a leading figure in technology research and innovation, and in turn, as he tells it, an experienced if reluctant veteran of the tech-patent minefield. When asked what the role of art is within the competitive commercial system, his deadpan reply was that the system is dominated by a minimum four-to-one investment-value paradigm, and is increasingly corrupted with legal battles over patents, the majority of the money at stake going to lawyers instead of into new developments and ideas. His advice to artists and innovators: offer a limited edition of the operative technology for sale, and then make it all free.

And then there was Telenoid Tom, or “the minimal human,” as Ogawa described him. Where past androids have suffered from what is known as the “uncanny valley”—the more human-like the robot is designed to be, the less comfortable we tend to be with the results—the child-sized, gender- and expression-neutral Telenoid (and its low-fi cousin, the Hugvie) has been developed not as a replica for human presence, but as a stand-in. Think of it less as a companion than a tactile communication medium that embodies the voice and general traits of a distant friend or relative. So, for example, a grandmother can call her grandchild via the Telenoid and have an emotive experience, as if they were speaking to, holding and hugging the child in person. “The imagined face is mentally projected on the neutral body,” says Ogawa of his team’s research into the Telenoid form. “Minimum design maximizes the imagination.” Trial studies with the Telenoid are ongoing in Japan and Denmark, and work on a mobile phone–sized prototype is underway…all of it, theoretically, coming to a store near you in the not-too-distant future.

2. Art, Technology and the Institution

“We are entering a post-convergence age constantly in flux and reaction to the exponential growth of software and hardware platforms,” said Conrad Bodman, guest curator of “Digital Revolution” at the Barbican Centre in London, UK, this summer, and keynote speaker for day two of the conference. As institutions and exhibition makers, he said, “we need to define ‘digital.’ Is it marketing and commerce, or is it creativity?”

Not surprisingly, Bodman has favoured the latter in a series of exhibitions over the past decade that have focused on siting the trajectory of video games—from technology labs to video arcades to homes—as a major factor in the modern cultural complex. For him, the key to this lies in “getting behind the games” to find out “who are the creators and why do they do it?” His exhibitions create a physical engagement for the audience where games are played, but also tell the story of the designers and their ideas, whether in studio-developed blockbusters like World of Warcraft or DIY upstarts like Minecraft.

Yet, for Bodman, institutional and curatorial questions remain: How do we preserve digital media for the future? (His main acquisition source for original game platforms is eBay.) And do we need to preserve them? (Perhaps, he suggests, it’s okay that these games disappear with outmoded technologies.) More importantly, what is the digital legacy and how to create it? “Commissioning is the heart of building this field of research and exhibition,” he concluded. “I’m more interested in the ideas and the people than the base technology.”

That idea was echoed by Chris Salter, director of the Hexagram-Concordia Centre for Research-Creation in Media Arts and Technologies. Founded in 2002 as an interdisciplinary, university-based network in Montreal with partnerships ranging from local artist-run centres to global institutions, Hexagram works, as Salter described it, on the principle that creative practices should be seen as research both within the academy and everyday life. It’s about “institutionalizing research” in new ways, he said, “and the transfer of research to industry not as patent or property, but as people and ideas.”

Salter admitted to a lingering logic of accountability in the studio-lab paradigm that “has less to do with art and technology than with political economies.” Yet the gist of his argument seemed to be that the relationship between “technoscience” and society must continue to move out of the ivory tower and into the public sphere. For him, alteration, transformation and transdisciplinarity are crucial to innovation, as is the imperative moral challenge of what new technologies actually do in the world.

“Artists work at the point of resistance in these structures,” Salter explained. “Most artists don’t see their works as creating new knowledge. Art practice is instead a question-generating machine, the construction of new futures not predictable in advance.”

Following Salter, Mike Stubbs, director of Liverpool’s FACT (Foundation for Art and Creative Technology), opened his presentation with British artist Richard Billingham’s Siberian Tiger, one in a series of short videos by artists co-commissioned by FACT for the Channel 4 television program Random Acts. A wry parody of the art market and the oblique commercialization of environmental devastation in the form of a shopping-channel infomercial (slotted into late-night broadcast in 2012), the work is a prime example of FACT’s often radical use of technology and media to interrupt the status quo of public space and thought.

“Technology fetishizing the future is pointless,” said Stubbs, citing other critically noted FACT projects like Tenantspin—a DIY Internet TV channel produced by and for residents of a Liverpool high-rise complex by Danish artist collective Superflex—and Krzysztof Wodiczko’s recent Veterans Vehicle Project as ways that collaborations between artists, communities and institutions can have meaningful and immediate impact. The question for FACT, said Stubbs, is “how do you populate other places outside the building? How do you blend collaborative practice with the impetus given by artists to just do stuff, and use that license to see how just how far you can push things?”

3. Art, Technology and the Artist

If there was one part of the conference where all of these at times disparate critical concerns converged, so to speak, it was in the nightly program of artist performances at the Banff Centre’s Margaret Greenham Theatre.

In Montreal-based contemporary dance and interactive media group kondition pluriel’s Enjeux, human-scale lightboxes were pushed, dragged and stacked around the stage triggering a body-and-mind choreography of projected images and sounds.

Australian composer and artist Robin Fox’s oscilloscope-driven Monochroma Laser Show made good on his promise to unfold “what electricity sounds like.” (“The more disturbed the sound, the more interesting the image,” he warned in his conference presentation.)

As sound and image cascaded and whirled on the floor and wall of the theatre stage, Umeda’s alternately robotic and fluid movements seemed to at once submit to and control the digital chaos. It really was something to be experienced rather than described, and in leaving the performance back into the deep chill of a dark and snowy mountain landscape, where a real blizzard had just passed, it struck me that for all of the complexities and contradictions in the relationship between art and technology, in the end it returns to this: seeing may be believing, but being human is what makes it real.