This year's Papier15, an art fair in Montreal devoted to works on paper, has plenty of great pieces. Here are some highlights from the preview. 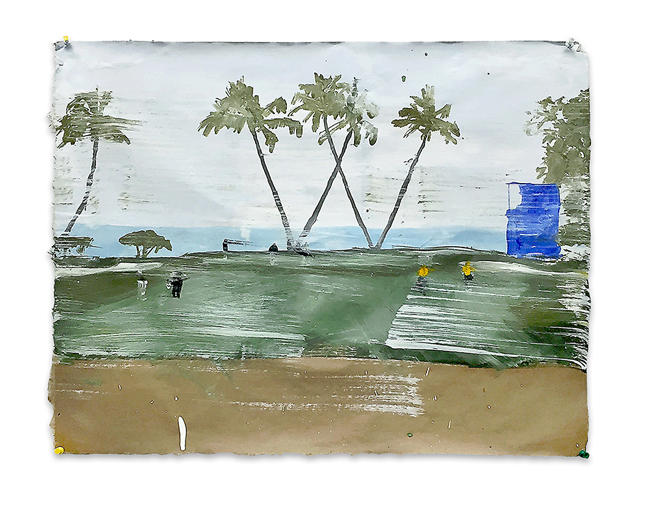 by Amy Luo and Caoimhe Morgan-Feir

The most pervasive view at last night’s Papier15 preview was not the artwork, but Montreal itself. With booths facing the perimeter of the 10th and 11th floors of the Complexe de Gaspé, the building’s windows were the omnipresent, panoramic pairing for each gallery’s selections. This floorplan notably partitioned the event: once visitors stepped into one booth, the others dropped out of view, an effect something like walking into a gallery in miniature.

The preview was well attended, with hometown favourites gathering the largest crowds. By mid-evening it was easier to avoid the crush of viewers at the booths of galerie antoine ertaskiran (which featured heavily impastoed pieces by Kim Dorland and an oddly resin-covered piece by Jon Rafman) and Galerie Hugues Charbonneau (showing a familiar but dependable grouping of pieces by Tammi Campbell, Trevor Gould and Séripop) than it was to push through.

As the fair opens up to the public today, interest should mount in the galleries from further afield, such as Winnipeg’s Lisa Kehler Art + Projects (who brought some incredibly meticulous drawings by Derek Dunlop) and Vancouver’s Initial Gallery (who tapped into the fair’s most popular medium: collage).

Here are a few highlights from the preview. If the curatorial strategies and brisk sales of past iterations of Papier are anything to go by, expect all of these booths to be entirely altered by the weekend’s end.

Parisian Laundry took full advantage of this year’s increased booth size, mounting large-scale photographic works that stole the show. Celia Perrin Sidarous’s ink-jet prints on matte paper arrange unusual objects—sponges, blood oranges, triton shells—so that they take on an odd visual equivalency. In the midst of a fair with three packed floors of artworks, these images mounted a familiar effect: namely the saturation point at which objects begin to blur into one another.

Collage was surprisingly ubiquitous this year. A standout was Division’s offering of brand new collages from Winnipeg’s Paul Butler. These new pieces are less playful and more eerie, with ghostly silhouettes emerging out of magazine cut-outs of urban streets, verdant scenery and ornate interiors. They’re both confrontational and discreet, and graphically pleasing to boot. Interestingly, the pieces are actually blown-up prints of the original collages sourced from print material, playing with multiple layers of reproduction.

Though it will come as a surprise to no one, painting is not one of the main contenders at Papier15. Figurative painting, on the whole, takes a back seat to collage, which seems to be everywhere at the fair, not to mention photography. But Richard Storms’s Wailea (2015) made me regret that imbalance. With swaths of acrylic paint over Moriko Kenzo paper, the painting’s ground sneaks out from the work’s bottom quarter. It’s a wonderfully atmospheric piece, and an eye-opening moment of unabashed escapism.

Fresh from launching a new Montreal gallery space, Ottawa dealer Patrick Mikhail Gallery’s booth at the fair offered a commanding large-scale landscape from local photographer Jessica Auer. The sweeping shot of Norway’s snow-blanketed peaks is a sneak preview of Auer’s new body of work produced during a recent residency at Skaftfell Art Center in Iceland. Like the best of Auer’s landscape photographs, this shot makes an expansive and anonymous site feel singular and intimate. And its austerity and grandeur works well here, cutting through the surrounding visual buzz and freezing the gaze.

Clint Roenisch’s booth received unanimous critical praise at last year’s fair, and this year he’s staged another knockout. With Eli Langer’s sketchy character studies ambling across the wall in a salon-style hang, the Toronto gallerist managed to tease out the latent narrative quality of Langer’s work—where are the figures with their backs to us headed? What’s the connection with the beatific figure in the blue coat? All questions that build on the intriguing and absorbing punch of the work.

Among the international offerings were a series of linocuts by William Kentridge, presented by Barbara Edwards Contemporary. The South African artist is celebrated for his animated drawings, so the choice only seems natural. The prints on view are from his Universal Archive series, which began as a sequence of ink drawings on pages of old dictionaries. The drawings were later photo-transferred to linoleum plates and printed back onto dictionary pages with black ink. Through this process of translation, the final prints bear black pools of gestural, evocative forms that undercut the typical style of traditional linocuts.

Joseph Tisiga’s watercolours stood out at Diaz, where the Whitehorse-based artist held his first-ever solo show just a few months ago after having gleaned high-profile nominations for the RBC Painting Prize and the Sobey Art Award. Tisiga’s narrative paintings make for enjoyable slow reading, especially at such a fast-paced event. They draw on contemporary life in First Nations communities but distort it into fictional scenes with a magical realism–like blend of banality and myth. Tisiga has cited the influence Carl Jung and Samuel Beckett, which resounds in the bleak atmosphere of these offbeat paintings.

Art Mûr’s display included two exceptional prints from 2014 Sobey Art Award winner Nadia Myre. From her Orison series, the pieces are large and, from afar, look like spazzy white scratches on a black background. They’re visually appealing, especially if one is inclined to a minimalist aesthetic, but the underlying process is quite complex. The photographic prints derive from the backside of Myre’s earlier beaded Indian Act works, so the white marks index the beader’s stitches on the document pages. It’s nice to see an artist’s work in a more ephemeral and commercial medium relate so eloquently to their broader practice and concerns.

Pierre-François Ouellette art contemporain’s booth contained two intriguing paper-based offerings from Montreal-based artist Naomi Cook: a large drawing and a smaller engraving. The drawing, a delicate ink rendering of a strange, tailed creature in recline, reflects some of Cook’s artistic influences, from the tinge of grotesque in Goya’s realism to the sensitivity of mark-making in Cy Twombly’s scribbles. The engraving has fun with Cook’s conceptual interests in sound and technology: using a custom computer program, Cook translated an engraved image of the human ear canal into sound waves; the engraving and sound wave are depicted in the work together, documenting an experiment reflecting on the codes behind representational forms.

Erika Dueck’s whimsical sculptures of miniature rooms were eye-catching, especially given sculpture’s scant presence at the fair. Dueck is well known for her meticulous handicraft, having received the BMO’s 1st Art! Invitational Student Art Competition in 2013 for her installation of miniature rooms. Her new pieces at the fair involve a more roundabout and inventive presentation. Each diminutive scene, made of paper and various other media, is housed in a vertical tube, which is then reflected by a mirror into an upright image for the viewer’s eye.