Structures: On Legacy, History and Influence

In light of the recent passing of writer, arts advocate and former editor of artscanada Barry Lord, senior editor Bryne McLaughlin reflects on the intersecting paths of our publication's history, and the theme of our spring issue 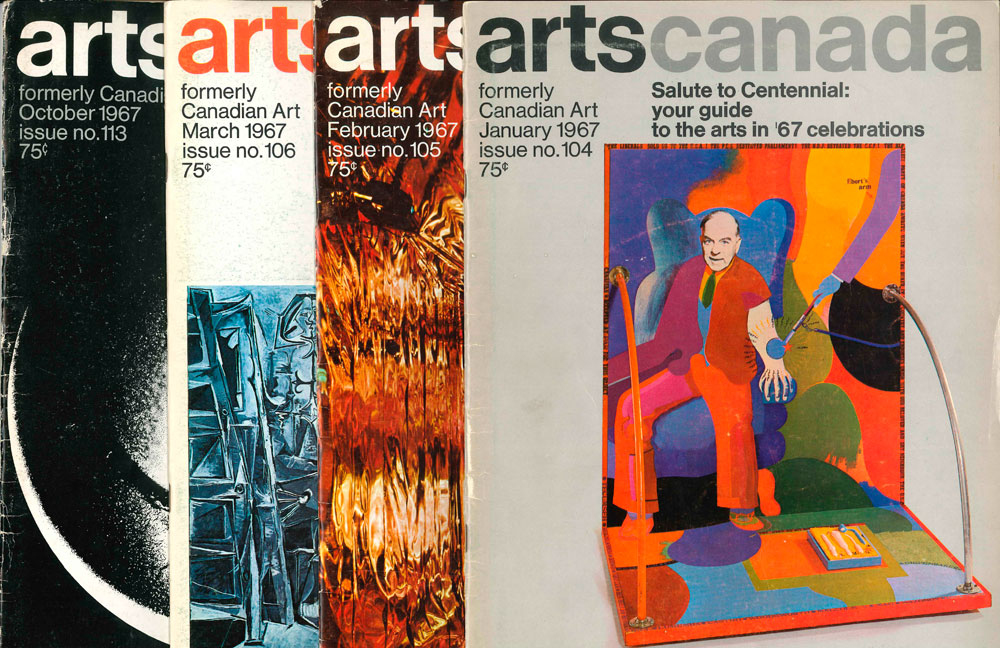 Four artscanada issues from 1967. The innovative structure and content of these magazines continues to resonate 50 years later.

In late January, I emailed the former editor of artscanada, Barry Lord. It was a simple fact-checking query to verify his tenure at the magazine in the late 1960s, the details of which, based on our office archive of artscanada issues and an online search, remained vague, even contradictory. His reply, for the record: “I took over at Canadian Art, published by the Society for Art Publications (directed by designer Paul Arthur) in September 1966. At the same meeting where I was appointed Editor, the Society decided to change the name of Canada’s national art publication to artscanada, and adopt the mag-in-a-bag format, including the discs [more on that to come], and much else besides. The first issue I edited appeared in January 1967.”

His email continued: “Montreal had passed a city ordinance making protests on the Expo 67 grounds illegal. In July I was arrested (one of three) for protesting Lyndon Johnson’s visit to Expo. Along with a negative piece about an otherwise favoured artist, my arrest was cited as the reason why the Society was asking for my resignation. I resigned as Editor in the fall of 1967.”

It’s a telling anecdote that not only confirms some of the footnote history of this magazine, but also the broader sense of risk-taking urgency, commitment to change and a new, more inclusive cultural ideology that I’d always read into those early issues of artscanada. It may have been the radical climate of the times, but Lord put his job on the line for the social justice he believed in, and, for me at least, that’s no small consideration, then or now.

Lord kept on writing for artscanada, which continued for the next decade under the editorship of Anne Brodzky. In 1974, he authored The History of Painting in Canada: Towards a People’s Art, an unprecedented, Marxist-driven social-political study of artists who had until then been largely excluded or ignored from the canon. Building on mixed experiences as a government museum program officer in the late 1970s, he and his wife, Gail Dexter Lord, founded Lord Cultural Resources in 1981, an international museum-planning consultancy with a public-first mandate that Lord expanded on in his 1983 book Planning Our Museums/Planification de nos musées—widely seen as a groundbreaking handbook in reorienting the fundamentals of institutional policy and museum design worldwide. His latest book, Art and Energy (2014), tracked the historical impact of resource extraction and changing energy sources on the shaping of art, culture and society. “Gail and I are onto something that is really quite profound: where our energy comes from determines our values,” Lord told Adam Lauder in an interview for Canadian Art in 2012. “It’s surplus energy—the concept of surplus energy. Energy beyond the basic we need is of course the energy that makes our civilization possible, that makes our culture possible.”

Earlier this week, news arrived that Barry Lord had died on March 9. I’d already been thinking about Lord and that email that he sent as a way into writing about our Spring 2017 issue and its theme, “Structures.” The issues that we’ve produced over the past year owe a certain debt to the work that Lord, and then Brodzky, did with artscanada in the late 1960s and 1970s. That magazine’s loosely thematic, interdisciplinary coverage and provocative, unorthodox critiques of exhibitions, architecture, theatre, literature, poetry, music, film, television and more, as well as its unconventional design—particularly in the staple-bound “mag-in-a-bag” issues that Lord oversaw, with its tabloid newsprint–insert review sections—has been a structure we’ve looked to as model and inspiration. It aimed at a new critical awareness outside the traditional confines of genre and region, and saw visual art not as monolithic, but as a shifting and changing cultural paradigm. At times, the connections between then and now seem uncanny, as in Lord’s debut January 1967 issue, which looked at Centennial celebrations, and a following number on Expo 67, that each carried a certain critical undertone that is not unfamiliar to many current thoughts on Canada 150.

It seems especially fitting, then, that our spring issue in particular puts that influence front and centre. On the cover is a smartphone snapshot by Geoffrey Farmer of the February 1970 cover of artscanada (featuring Michael Snow) recently taken in the library archives of the San Francisco Art Institute. It turns out that Farmer, who is in the midst of preparing his exhibition for the Canada Pavilion at this summer’s Venice Biennale, is also a big fan (and collector) of artscanada. He first discovered the magazine and Michael Snow’s work for the Venice Biennale in 1970 in its pages as a student at SFAI in the early 1990s. As he told our editor-in-chief David Balzer: “It was one of those moments that changed my life.”

Also included in subscriber copies of our spring issue is a turntable-ready artist edition flexi disc, inserted into a four-page, gate-fold collage artist project by Farmer. The flexi disc was a hallmark of Lord’s experimental, boundary-pushing approach at artscanada, with a series of recordings (Lord referred to these as a “talking magazine”) in his 1967 issues featuring artists speaking about their work, round-table discussions or musical compositions. Farmer’s emerald green flexi captures Toronto art duo Life of a Craphead performing an updated version of John Cage’s “Sounds of Venice” at Art Toronto in 2016.

In many ways, the rest of the spring issue follows the same critically idiosyncratic path that Lord established in artscanada all of those years ago as a kind of counterpoint to rigid structures and status quo thinking: smellscapes, invented histories, social work, fashion, feminist architecture, science fiction, artist saboteurs and more. For my part, I hope that this issue offers a tribute to Lord’s artscanada legacy and reassurance that his commitment to rethinking culture, taking risks and challenging the taken-for-granted structures that surround us will continue.

Our Spring 2017 issue, “Structures,” is on newsstands across the country from March 15 to June 15. To get every issue of our magazine delivered to your door before it hits newsstands, visit canadianart.ca/subscribe.