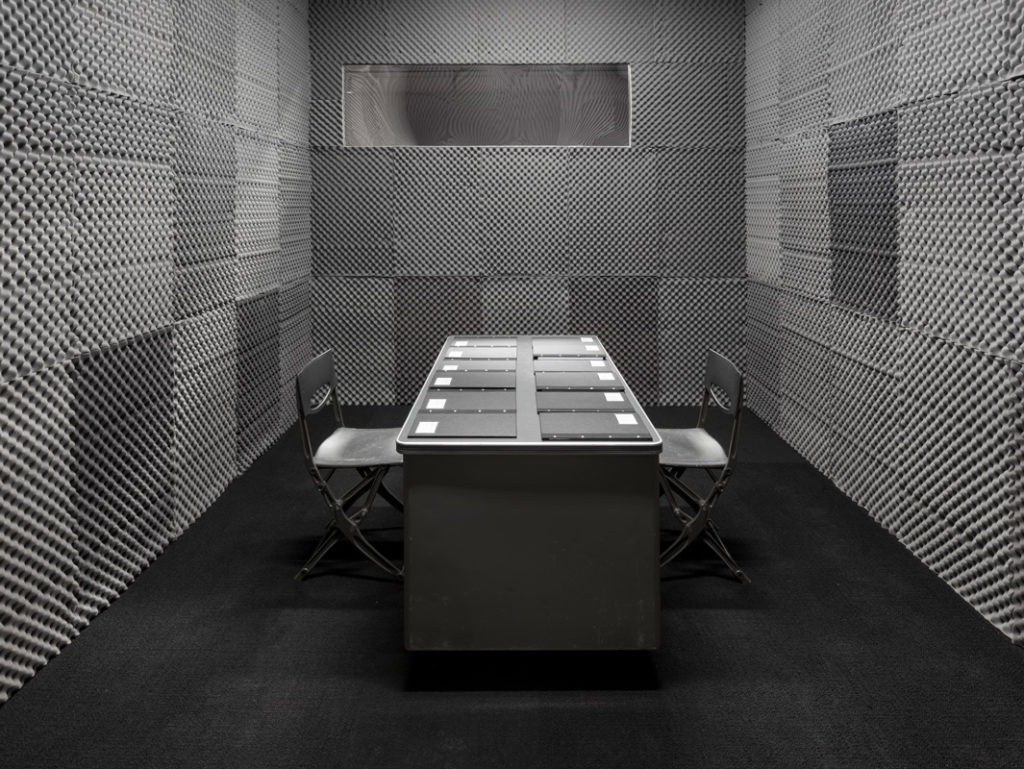 In November 1979, Sir Anthony Blunt, the esteemed art historian and former director of the Courtauld Institute of Art and surveyor of the Queen’s Pictures, was publicly denounced as a Soviet spy. The British intelligence establishment had long known of Blunt’s subterfuge; 15 years earlier it had secretly traded him immunity in return for details on his role in passing classified details to Soviet agents as a wartime MI5 officer and member of the Cambridge Five. The art world may have had its suspicions, too. From 1948 to 1955, Blunt consulted for the National Gallery of Canada. Yet by the early 1970s, the provenance of many of the acquisitions he brokered for the gallery had fallen into contention. In life and in art, it seems, Blunt had always played the double agent.

Blunt’s spy-game drama was just one of many overlaps between art, state security and the shadow world of double agency revealed in “CounterIntelligence,” a curatorial-cum-artist project orchestrated by Charles Stankievech for the Justina M. Barnicke Gallery earlier this year. Four years in the making and packed with nearly 100 primary-source documents, objects and artworks—not to mention more than 10,000 words of didactic texts—the sheer volume of Stankievech’s working material was enough to make heads spin. His point, however, was not simply to overwhelm with an archival deluge of hidden facts and obscured figures, but rather to puzzle together a conceptual web of duplicity strung on the grey zones between truth and deception, reality and fiction, good and evil.

The results were both morally unnerving and bizarrely sinister. To open the exhibition, a full-scale remake of a soundproofed interrogation room gathered dossiers of declassified and otherwise obscure documents ranging from a heavily redacted CIA exploitation training manual for Latin America to a 2011 invitation from the Libyan Ministry of Cultural Affairs to a New York Times fashion editor proposing an exhibition of “Colonel Gaddafi’s four decades of superior dress sense” at the Metropolitan Museum of Art.

In the next gallery, Harun Farocki’s video Serious Games IV: A Sun Without Shadow (2010), which documents the disparities between computer-simulated combat training and virtual rehabilitation, led to projections of propaganda-laden promotional clips for video games America’s Army (released as a recruitment tool by the US military in 2002) and Special Force (produced by the Hezbollah in 2003). In contrast, on an opposite wall Stankievech projected Collateral Murder, the raw, helicopter-cockpit footage of US troops decimating a group of unarmed Iraqi civilians released by WikiLeaks in 2010.

A set of custom-built tables zigzagged through the final gallery space, mapping out an array of artist’s books, publications and historical documents with artworks on the surrounding walls. In Abbas Akhavan’s Study for a Blue Shield (2011), for instance, a gaping hole in the gallery wall (the cut-out portion painted in the pattern of an international symbol of cultural protection then installed on the building’s roof) matched the negative-space “anarchitecture” in Gordon Matta-Clark’s Splitting (1974). Marcel Broodthaers’s 1969 blacked-out version of Stéphane Mallarmé’s poem Un Coup de Dés Jamais N’Abolira Le Hasard (A Throw of the Dice will Never Abolish Chance) mirrored redacted FBI surveillance on the American Indian Movement in Dana Claxton’s AIM #3 (2010). And iPod video footage of flashing laser-pointers in Tahrir Square during the Arab Spring (which functioned in part to identify snipers and blind night-vision surveillance) assembled by Stankievech and Joshua Simon paralleled the vorticist design of Edward Wadsworth’s Dazzle-ships in Drydock at Liverpool (1919).

In the end, “CounterIntelligence” was a meticulous exercise in contextual gamesmanship, a bid by Stankievech to connect the underlying codes of contemporary art, institutional infrastructures and the intelligence archive—not to mention the tandem dematerialization of information and art—as a master paradigm of cultural resistance. A line from a Canadian Army guide to camouflage basics from the Second World War included in the show perhaps offered the best takeaway advice: “Do keep in the shadow,” it warns, “and remember that the shadow moves.”

I shouldn’t have been surprised by Stéphane Gilot’s Pièce pour cinq interprètes, lumière rose et silence (2014). Since the late 1990s, the Belgian-born, Montreal-based artist has been designing installations—or maybe it’s better to describe them as immersive sculptural environments where form, time and place collide with a theatrical, absurdist edge. I’ve been following his work for more than a decade, ever since stumbling onto his strange and fascinating multimedia surveillance/detention installation Le pavillon de reorganisation des sens in 2003 at Montreal artist-run centre CIRCA. And while Gilot and I have kept up periodically in the years since—him sending me press releases, catalogues and brief notes and images from new exhibitions; me writing at a distance about his increasingly focused and conceptually complex installations, like the Beckettian Séjour bistre in 2011 at l’Oeil de poisson in Quebec City—seeing his work this spring at Pierre-François Ouellette’s satellite project room, pfoac221, just down the hall from the gallery’s main space in the Belgo Building, was an unexpected reminder of what drew me to Gilot in the first place.

“The exhibition was meant to focus on the experience of the work rather than on its description,” writes the show’s curator, Ariane De Blois, by email. And in the exhibition’s scripted press release, Gilot framed the installation as “a mimodrama for five performers [that] unfolds (in abstracto) in a monochrome cell.” It’s true that Pièce pour cinq interprètes, lumière rose et silence—which resembles a cold, grey bunker on the outside with two entryways leading to a vaulted monochromatic cell (painted in “mildly lewd pink,” as De Blois describes it) on the inside—might be best considered as a stage set for the perceptual contrasts and psychic potentials that gradually emerge from spending time in the space. There are recesses at each end of the interior, and as you sit either alone or across from another visitor, the cell becomes a kind of superconductor for the random thoughts and memories of a quietly wandering mind. (“Time pauses, stretches and becomes longer,” is the press-release stage direction from Gilot.) A soundtrack of five motifs recorded on site subtly resonates inside the cell with echoes of the city, the sounds of footsteps and faint conversations, and the humming pulse of the building’s lights and plumbing weaving a ghostly narrative structure. Every once and a while you are drawn back to that external reality, but the experience of the work, for me at least, was really about letting go and giving way to the lulling calm of another, less complicated state of mind.

How does one picture the invisible? And why? These questions lay at the core of Montreal artist Nicolas Baier’s solo exhibition this summer at Galerie Division in Montreal. Working from images culled from media sources and the Internet, Baier (and his team of studio assistants) has devised a series of meticulously rendered paintings (titled Production de masse) that reproduce the various visual interpretations—based partly in theoretical science and partly in sci-fi imagination—of the Higgs boson or “God particle.”

Of course, no one knows what the particle would really look like, even if one could be seen, or even if it’s beyond our understanding of visual presence. What we do see in these images, no matter how sophisticated the science, is nothing more than a best representative guess, the artifice of reality at the highest level. But the proliferation of Higgs boson illustrations, both official and otherwise, reflects, it would seem, a need to give form to that which we cannot see but need to believe. It’s an act of faith, as Baier puts it, not dissimilar to religious belief or mysticism. This, in a way, critically ties his work and his thinking to the longer tradition of iconography and painting as devotional practice (and, it should be noted, to the specific traditions of Quebec abstraction in a trio of three large-scale tondos depicting accelerated particles in CERN’s Large Hadron Collider). “This is not a speech about painting,” Baier cautioned me when we walked through he show together, “it’s a speech about life.”

In a second gallery, Baier brought together works modelled on the proposed theory that the universe is not flat and infinite, but rather is confined to the finite shape of a dodecahedron. A selection of four works from his Vanité_dodécaèdre (2013) series paired mirrors chiselled with dodecahedral forms against their digitally scanned ink-jet counterparts. It’s a positive-negative play on form and formlessness as the etched geometries recede into the mirrors, yet dominate the fathomless darkness of their own self-reflective impressions (the digital scanner that rendered the prints is also a mirror).

And it gets more complicated. Apparently, if someone were to model this dodecahedron universe with a mirrored interior and a light source (a candle, for instance) at the centre, it would reflect infinite points of light. To test the theory, Baier designed a three-dimensional digital version of the hypothetical construct, then set it loose with as much computing power as he could muster. The resulting image, Schèmes (2013), with its clusters of artificial light interspersed by random glitches of darkness, took more than a month for Baier’s computer network to render even though it’s a mere fraction of the overall puzzle (as Baier explained, his processing power was limited to 500 reflections that in reality are endless).

In the exhibition’s final gallery, Baier’s Réminiscence 3 (2014) captured an image of a sunrise (or sunset?) above a billowing, cloud-covered horizon. Only this is not an actual scene; it’s a supercomputer-generated composite based on projected meteorological data from 9,999 years over Mexico’s Chicxulub crater—the catastrophic asteroid-impact site that many believe triggered the mass extinction of land-roaming dinosaurs. (Baier says he would like to have projected the data and the scene back to the crater’s initial creation 66 million years ago, but was limited by software capabilities.) Like Schèmes, Réminiscence 3 is both real and unreal, a conceptual/existential conundrum posed by Baier to reveal the inherent flaws in visually calculating the impossible.

Therein lies the key, I think, to Baier’s approach: His interest lies less in the result than in the obsessive pursuit of the abstract ideas and theoretical propositions that get him there. It’s a study of problems, not absolutes, where the mysteries of the imagination and faith collide and—in the end, for Baier and the rest of us—where questions don’t lead to truths, just to more questions.