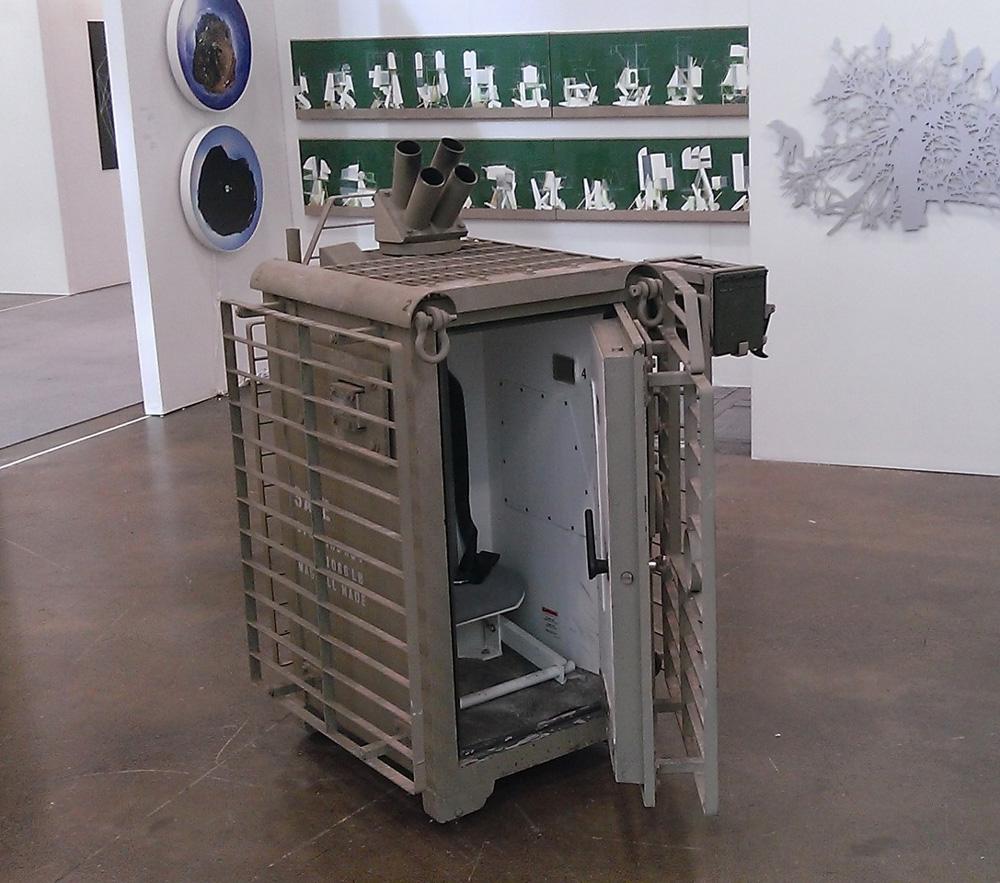 A Maskull Lasserre sculpture based on his experiences in the Canadian Forces Artists Program is another highlight at the PFOAC Art Toronto booth / photo Bryne McLaughlin
A new painting from Kent Monkman's Urban Landscapes series at Pierre-François Ouellette's booth is among the highlights of Art Toronto, Bryne McLaughlin writes / photo Leah Sandals (Image 1/2)

All was quiet at the Art Toronto media preview on Thursday morning. Well, almost all. Amid the warning beeping of hydraulic lifts making adjustments to lighting and signage, pockets of journalists and other advance viewers made their way through the warren of gallery booths. Some booths were empty, the art already hung and prepped for the evening’s gala kick off. In other booths, there was a pulse of quiet anxiety. Dealers and gallerists debated in hushed tones as works shifted places on the walls, or cruised the fair checking in with colleagues and checking out the competition. Piles of artwork labels were sorted and hung while installation teams with laser rulers in hand settled the finishing touches. Nearing a noon-hour deadline, the founder and director of Art Toronto, Linel Rebenchuk, could be seen clipping around the alleyways between booths in a golf cart making sure packing crates had been stowed and booths were primed for opening-night action.

Still, it was a good time to make an inconspicuous dry run through what this year’s fair has to offer. The strategy for many galleries is to freshen up their booths throughout the weekend, swapping sold works for new inventory and subtly reacting to the ebb and flow of interest from one artist to another. So it isn’t surprising to have your eye on a large-scale abstract painting one day, then find a grid of drawings or photographs in its place the next. But if first impressions count, then there is lots to look forward to at Art Toronto—much of it, it seems to me, from galleries based in Montreal.

Pierre-François Ouellette art contemporain (which has a gallery and project space in Montreal, and shares Centre Space with Feheley Fine Arts here in Toronto) has put a fantastic selection of works together for the fair. Highlights include recent grand-narrative paintings—including a brand new work based on social plight of First Nations people in Winnipeg—by Kent Monkman, blueprint-styled paintings based on monumental ruins at the British Museum by Dil Hildebrand, and a suite of poetic paintings on vintage tin-type photos by John Latour (be sure to ask about the companion book of fictions on these images).

The centrepiece at PFOAC’s booth, though, is a new sculpture by Maskull Lasserre, which transforms a 1940s-era bank safe into a trenchant comment on his time spent as an embedded artist with Canadian Forces in Afghanistan in 2011. The sculpture is the first in a series of new works dealing with his war-zone experiences that will debut at the gallery in Montreal at the end of November. It’s work not to be missed.

Galerie René Blouin, also from Montreal, opens the fair with a strong showing of paintings: a drifting large-scale abstract by François Lacasse, a pair of poetic explorations of space and existence by Pierre Dorion, an atmospheric conceptual work by Francine Savard and a sharp study in abstract realism by Anthony Burnham (a few hours after the media preview, the Burnham was acquired by the Art Gallery of Ontario). Look for new photo work by Pascal Grandmaison, and paintings by Marie-Claire Blais.

There’s a subtle theme of artistic obsession happening at the Galerie Division and Galerie Antoine Ertaskiran booths. Among the many A-list works at Division—by artists Michel de Broin, Manon De Pauw and Wanda Koop, and others—it’s the pairing of a new, digitally composed photo-and-etched-mirror work by Nicolas Baier that is, in equal turns, fascinating and intimidating. Even though gallery director Dominique Toutant patiently explained it to me in detail, the backstory to the work is too complicated to repeat here; it has something to do with the infinite micro-macro infinity that is contained within a theoretical dodecahedron form and Baier’s singular drive to realize the complex problem. A solo exhibition of works in the same series (including meticulously rendered paintings based on imagined representations of the Higgs-Boson particle) opens this weekend at Division’s Toronto space.

Works by Jon Rafman and Ken Nicol at Ertaskiran’s booth also move in obsessive realms. Rafman has a devoted international following for his 9 Eyes series of oddball and often disturbing large-scale photo works captured during untold hours of scanning Google Street View. He’s spun that wry, observational wit off into other works of note, including his Brand New Paint Job series, which seamlessly merges classic contemporary art motifs with the readymade surfaces of Google 3D images. Yet when thinking of Rafman, it’s the unbelievable reality of images from the 9 Eyes series that seems to always return to mind. The series is ongoing, a telling gauge of early 21st century attitudes toward society, politics, surveillance and image-making, with a critical mass that will only increase over time. Works by Nicol offer a neat low-tech parallel as he types and writes existentially minded phrases on paper in serial fashion that is seemingly never-ending.

Of course, this is just the beginning. There are many other notable works and galleries—from Montreal and elsewhere—in residence this weekend at the fair. But such is the nature of a sprawling, omnibus event like Art Toronto: so much to see and think about, but so little time to do it…especially, on Thursday morning, with a hustle on toward the gala frenzy.

Bryne McLaughlin is the managing editor of Canadian Art. To hear more about McLaughlin’s Art Toronto must-sees and reflections, visit Canadian Art at Booth 940 today at 2 p.m. for a live talk. This is one of a series of stories and talks by Canadian Art‘s editors offering in-depth picks and thoughts regarding Art Toronto 2013. For daily updates during the fair, visit canadianart.ca/arttoronto.

This article was corrected on October 28, 2013. The original post indicated that the booth of Galerie René Blouin may be a place to find sculptures by Patrick Coutu. In fact, shortly before Art Toronto, Coutu’s representation shifted to Galerie Division.