The Hudson’s Bay Company blanket is a symbol of colonial Canada, but for Métis people in the Prairies, it also stands for community, ceremony and survival. 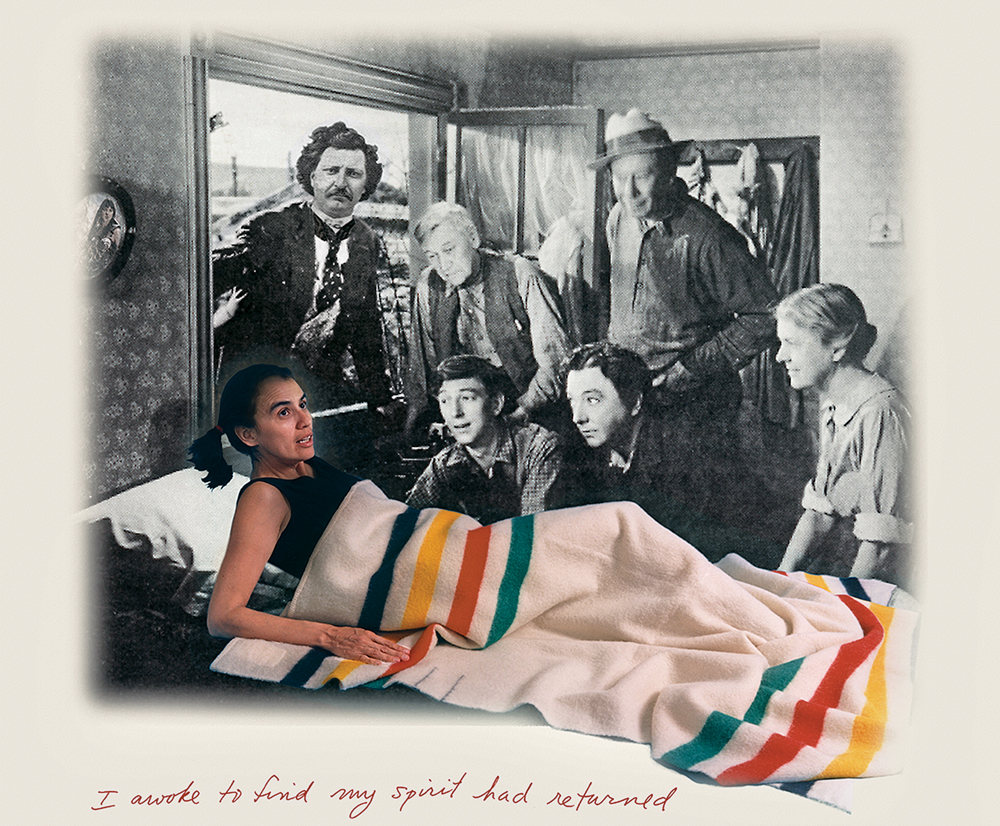 When it was time for my eldest daughter’s coming-of-age ceremony, we were living in Montreal, far from our traditional territory of manitow-sâkahikan (Lac Ste. Anne, Alberta). I hadn’t had the opportunity growing up to access rites of passage, because like so many of our ceremonies, they had been driven underground for generations and had fallen out of practice as a result.

I felt it was important to attempt a modified four-day ceremony, culminating in a feast, even if it had to be carried out in an urban environment. Women and Two-Spirit people were invited to share their teachings, medicines and experiences, rather than bring material goods.

I had been accruing gifts over the years in anticipation of this ceremony—gifts intended, in traditional fashion, for the invitees who would be celebrating this event with us. As is also traditional, on the fourth day I gave my daughter a new pair of moose-hide moccasins, and she was blanketed in a Hudson’s Bay Company point blanket.

On the Prairies, the HBC multi-stripe point blanket—white wool with colourful bands of green, red, yellow and navy blue—is highly prized among Métis and First Nations on this side of the medicine line. When we want to honour someone for their achievements, or give them a gift during a ceremony, blanketing is a shared custom, and not an inexpensive one! A double-sized wool HBC blanket runs for about $400 these days.

The blanket can be a hand-made star blanket (if there were a hierarchy, star blankets would clearly be at the top), a Pendleton or one of the many colours of HBC point blankets out there (with the multi-striped HBC blanket being the most instantly recognizable).

Often, these wool blankets are fashioned into capotes, or jackets, and you will see Métis, Cree, Dene, Siksika and other Indigenous peoples cutting a fine figure in their HBC outerwear.

Living in the east, however, I realized that the way these blankets are perceived by Indigenous peoples can be quite different to how we relate to them in the west. Some Indigenous people flat-out see them as a colonial symbol, and associate them with the putative “plague blanket.” Given the history of the Hudson’s Bay Company in this, I certainly don’t disagree with that viewpoint. I do balk, however, when people insist that the relationship we have with HBC blankets in the west somehow means we are more colonized—an accusation I have heard on more than one occasion.

Even noting this obscures a much more complex dynamic within which, contrary to tales of racialized company loyalty, the Métis played off various colonial powers (including the missions) against one another to secure better working conditions, rates of pay and opportunities.

If not loyalty to the Hudson’s Bay Company, and if not colonized sympathies toward a symbol of oppression, then why are these blankets so valued in the west? The fact is that wool is warm even when wet, dries quickly and is easy to sew. These are all important considerations in climes that can reach temperatures of minus-40 degrees Celcius in far too many months of the year. When worn-out buffalo hides, prized by settlers for their softness, were bought up in bulk from their bemused owners, and as new hides became increasingly scarce due to the colonial project of deliberate extermination, these wool blankets became sought-after and versatile trade goods.

At first these blankets were gifted or traded to Indigenous men considered important by colonial authorities, but eventually redistributive practices among Indigenous peoples saw them worn more widely. A fashion tradition was born, and has continued in the Prairies to this day.

There is a catch, however. Just because these blankets originated with settlers, it does not mean that they belong to settlers in the way they “belong” to Métis and First Nations here in the west. Our relationship with these blankets stretches back many generations, and involves a history that is fraught with complex dynamics and resistance to colonial encroachment, none of which is true of the môniyâw in his bougie HBC sweater.

Frankly, we have earned the right to wear these items, and we do so with a sense of understated irony that cannot be translated into settler contexts. We can curl our lips at multi-stripe HBC beach blankets, toques and, yes, even the expensive wool coats, when they are paraded about by clueless Canadians, while at the same time gifting these blankets to our most beloved community members. All without suffering from the vertigo of cognitive dissonance.

Chelsea Vowel is an award-winning Métis author from manitow-sâkahikan (Lac Ste. Anne). She tweets at @apihtawikosisan.

This article originally appeared in the Summer 2017 issue of Canadian Art magazine. To get every issue delivered to you before it hits newsstands, visit canadianart.ca/subscribe.