Blackface, Brownface and Redface in the Arts: A Bibliography

Exhibition highlights the history of racism in Canadian nation-building 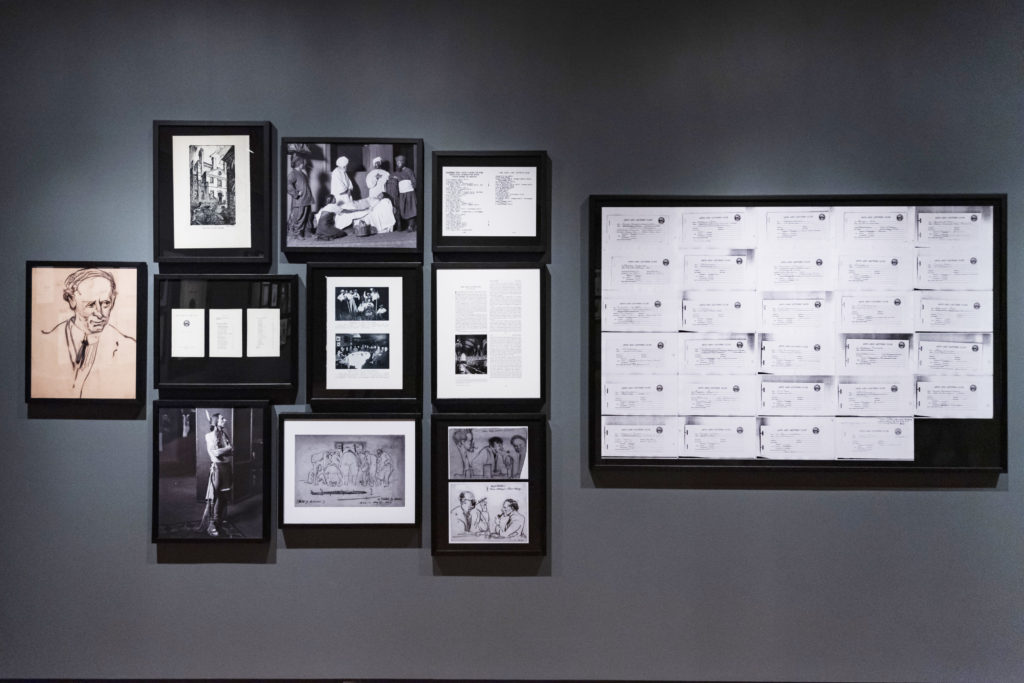 I spent the spring and summer months of this year developing the exhibition “God of Gods: A Canadian Play” with Toronto-based artist Deanna Bowen, currently on view at the Art Museum at the University of Toronto. This process included expansive archival research into representations and discussions of race in fine arts, music and theatre in Canada. The exhibition showcases books, plays, musical performances and paintings in which redface, blackface and brownface are prevalent. The scope of the exhibition, which looks at the early decades of 20th-century Toronto, highlights, among other things, that brownface, redface and blackface were part of the performance repertoire of elite social circles at the time. Presented as groups of archival objects, “God of Gods” brings attention to how racism and exclusion functioned within the social circles of influential Canadian figures.

Two weeks after the opening of the exhibition, photos of Justin Trudeau in brownface and blackface were made public, prompting me to envision these photos as part of the images in the exhibition where this kind of performance based on stereotypes recurs time and time again. In this context, Trudeau’s photos show how this practice has been, and continues to be, part of Canada’s history of white elites and politicians undertaking racist performance as entertainment.

Bowen’s and my research for the exhibition included bringing together documents, images and films from the archives of some of the most prominent institutions in Canada including the collections of the University of Toronto, the Canadian Museum of History, the Arts and Letters Club, Library and Archives Canada and the Art Gallery of Ontario, as well as numerous newspaper archives. Documents featured in the show exhibit images of racial mockery and cultural appropriation in places frequented by prominent politicians, artists, writers, journalists, professors and composers. Two images from plays put on at the Arts and Letters Club in 1915 and 1918 show some actors in brownface and others wearing minstrel costumes. When put side by side with Trudeau’s images, they are uncannily similar, despite the one-hundred-year difference.

The Arts and Letters Club was a gentleman’s club where many of Toronto’s elites met, socialized and developed projects. Its membership included artists from the Group of Seven; Governor General Vincent Massey (who in 1922 was the president of the club); artist and principal of the Ontario College of Art George A. Reid; poet and deputy superintendent of the then-named Department of Indian Affairs Duncan Campbell Scott (who upheld the potlatch ban and supported the system of residential schools); and Canadian Bank of Commerce president and arts patron Sir Edmund Walker. A photo of Reid published in the Globe in 1925 announces him as the winner of Best Gentleman’s Costume at a masquerade. It shows him dressed as Samuel de Champlain while posing with artist Langley Donges, who is shirtless and wearing a skirt and moccasins while covered in brown face paint. These images provide a much-needed context for Trudeau’s costumes, one that shows the continuity of such performances over the span of a century.

When asked about Conservative candidates who have said racist and homophobic things in the past, Conservative Party leader Andrew Scheer commented that he’d accept a candidate as long as they “[take] responsibility for what they’ve said, and [address] the fact that in 2019 some things that may have been said in the past are inappropriate today.” Journalist Jesse Wente reminds us that these comments and practices were never appropriate—that they were always offensive to the people they mocked. For example, Cheryl Thompson, who has researched instances of blackface in Canada extensively, pointed out how from 1841 to 1843 the Black community in Toronto annually petitioned City Council to prohibit minstrel performances in the city; every year, the petition was rejected.

Headlines about blackface, redface and brownface come up in Canada often, where scandals such as last year’s play SLĀV or university students donning racist costumes get treated as ahistorical, singular incidents by the media rather than as part of an ongoing practice of racism and colonialism. The work highlighted in “Gods of Gods” demands this kind of historical context, as it provides a close reading of influential Canadian figures and their legacies in today’s imagining of Canadian culture. Trudeau’s privilege is not an excuse, but it does highlight how even today certain people in Canada are not required or expected to learn about racism, the history of racism, or to listen to what people of colour have been saying for centuries.

In order to contextualize these discussions within the history of racist practices in Canada, Canadian Art has compiled a resource list for further reading. These are some places to start.

The Secret Life of Canada
A podcast by Leah-Simone Bowen and Falen Johnson that “highlights the people, places and stories that probably didn’t make it into your high school textbook.”

Red Skin, White Masks: Rejecting the Colonial Politics of Recognition by Glen Coulthard
A book about recognition, identity, liberal politics and the history of colonialism. It’s a must-read for those interested in alternative politics based on Indigenous knowledge.

“Outlawed Social Life” by Candice Hopkins
Curator Candice Hopkins discusses the potlatch ban and its intertwined history with anthropology, contemporary art and museum collections. She mentions how objects confiscated during the ban ended up in the personal collections of surrealist artist André Breton and Indigenous Affairs superintendent Duncan Campbell Scott, who upheld the ban.

“The complicated history of Canadian blackface” by Cheryl Thompson
A poignant essay about the history of blackface in Canada.

National Visions, National Blindness: Canadian Art and Identities in the 1920s by Leslie Dawn
Dawn examines the formation of Canadian national identity in the 1920s. He highlights how art was a part of this development and how Indigenous visual cultures were used as a resource for artists such as the Group of Seven and Emily Carr.

M.I.C.E Issue #04 on Opacity edited by Mark V. Campbell and Pamela Edmonds
This issue includes texts by artists, poets, scholars and curators about opacity as a primary aesthetic form in which contemporary notions of Blackness are encountered.

“Black Is Canadian” by Kelsey Adams
An exhibition review about the ROM’s “Here We Are Here” exhibition, which showcased work by contemporary Black artists based in Canada.

“Canada’s slavery secret: The whitewashing of 200 years of enslavement” and “Slavery’s long shadow: The impact of 200 years enslavement in Canada,” on CBC’s Ideas.
A two-part series about racism, blackness, slavery and the criminal justice system in Canada featuring scholars Afua Cooper and Charmaine Nelson, as well as poetry by poet laureate George Elliott Clarke.

In the Wake: On Blackness and Being by Christina Sharpe
In this book, Sharpe discusses literary, visual, cinematic and quotidian representations of Black life.

“Marius Barbeau and Early Ethnographic Cinema” by Lynda Jessup
An essay that examines anthropologist Marius Barbeau’s ethnographic films showcasing Indigenous communities in the West Coast. The films were exhibited as part of “special evenings” in connection with the 1928 exhibition “Canadian West Coast Art: Native and Modern,” held at the Art Gallery of Toronto (now the Art Gallery of Ontario), which showed work by Indigenous artists from the West Coast alongside prominent Euro-Canadian artists including members of the Group of Seven and Emily Carr.

“The Largely Unknown History of Blackface in Canada”
An episode of Hyperallergic’s Art Movements podcast featuring a conversation between professor Cheryl Thompson, anti-racist educator Rania El Mugammar, and the Gardiner’s chief curator Sequoia Miller about a figurine in the in the collection of the Gardiner Museum.

“Why We Need to Keep Talking about White Privilege in Arts Education” by Leah Sandals
An interview with Rubén Gaztambide-Fernández, who released a 2017 report showing that students entering Grade 9 at Toronto’s arts high schools are more than twice as likely to be white—and nearly twice as likely to come from a wealthy family—than students at other Toronto public schools.

“Artist Calls for More BIPOC Artworks and Staff at Canadian Museums” by Leah Sandals
Artist Chukwudubem Ukaigwe organized a performance in Winnipeg to highlight the whiteness of gallery collections. He also says there aren’t enough BIPOC staff at Canadian museums.

“Issues of Race” by Zainub Verjee
Published in Parallelogram, run by the Association of Non-Profit Artists’ Centres, in 1988, this article offers a historical overview.

“In The Red” by Joane Cardinal-Schubert
Published in FUSE Magazine in Fall 1989, this article details how the Canadian art system capitalizes off appropriation of Indigenous cultural practices.

“Racial Plagiarism and Fashion” by Minh-Ha T. Pham
In this 2017 article, Minh-Ha T. Pham rejects the term “cultural appropriation” and instead advocates for the term “racial plagiarism.” Pham argues that this term is more compatible with intellectual property law, and the author explains how different types of unauthorized copying fit into the legal landscape.