Artist Abedar Kamgari hoped that her 27-hour walk from Toronto to Hamilton would make her feel at home. But she still navigates her experiences as an immigrant and refugee 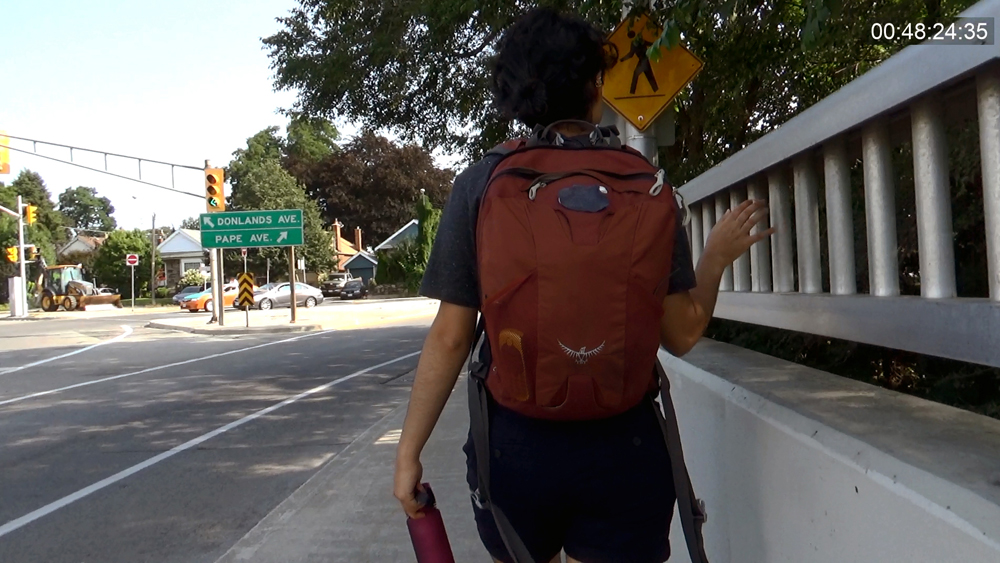 When artist Abedar Kamgari was eight years old, she and her mother left Iran for Turkey as refugees. She remembers taking a train, getting off of it, boarding a boat, then another train. She remembers how the bedsheets felt different from one cabin to the next. And how the sink drain in the Turkish train car was full of moth balls.

After two years in Turkey, they departed westward once more, immigrating to Canada in 2006. Last year, on the 13th anniversary of their departure from Iran, the young artist embarked on another journey: she walked the 87 kilometres from her mother’s apartment in North York, travelling west again, this time around Lake Ontario, to her home in downtown Hamilton. Over the 27-hour haul, Kamgari invoked memories of the migration trip begun years earlier, mapping one psychogeographic experience over another. The video performance, titled The Journey West (2017), forms the centre of a solo exhibition currently on view at the Art Gallery of Hamilton.

The Journey West starts in her mother’s living room, where Kamgari recalls the moments—hugging her family, upset, unwilling to go—right before they stepped onto the train out of Iran. Along the walk, the landscape rouses dormant memories. The sight of the DVP, a busy expressway cut through Toronto’s Don River Valley, causes Kamgari to remember a highway in Tehran leading to her childhood home. Only she doesn’t say that it reminds her of the road; she says that it is the road.

Farther along, she similarly points out the Turkish elementary school she attended while living in Kayseri. She speaks as herself and as her mother, in Farsi and in English, about the past, the present, and the future as if each are unfolding at once before her. It’s night when she enters Hamilton, and her strenuous journeys—one corporeal and the other introspective—have exhausted her, so the monologue quiets as she pants and plods the final leg.

Kamgari’s performances are durational, involving often an act of labour or some physical hardship. In the series Finding words for the feeling (2016), for instance, Kamgari pushes, rolls, and drags a 50-pound plaster mass; it leaves behind a chalky trail, while also recording the bumps and scrapes dealt unto it along the way. The toiling body, she’s found, communicates a sentiment felt intimately, though her vocabulary in either English or Farsi fails to impart it. The actions “needed to be exhausting and needed to be challenging and needed to feel unnecessary almost,” she explains, “but mundane also.” Exercises that ought to cause the viewer to ask: why are you doing that?

“I’ve spent a lot of time trying to make sense of my experience as an immigrant,” she says. “Before I knew the word ‘diaspora,’ I had these feelings: there was this desire to belong and a barrier I couldn’t quite bridge. I felt like I was being unreasonable, like I shouldn’t be struggling so much.” Venturing an onerous hike over memories and miles or shouldering an extra weight on her daily routine—such actions give language to the feeling.

With blistered and bandaged feet, taking aspirin to dull aches, the kilometres covered in The Journey West were painful. Kamgari had anticipated how the walking would hurt her knees, but hadn’t considered what a hundred thousand steps would do to her hips. It’s not the pain or tedium, however, that solely define her refugee experience. (Here, she asserts that theirs was relatively lucky: their passports were withheld and they had to check in at a police station twice a week, but they didn’t live in tents or a camp, nor were they forced into hiding from the threat of deportation like some families they knew). Much more of the experience was characterized by “nothing happening” and by “waiting around,” she says. Sections of The Journey West reflect that: its cameras remain running for the hours of sleep taken by Kamgari and her small crew overnight at a motel near the midpoint. The audience remains embedded through action and rest. In some limited, metaphoric sense, they, too, are made to wait.

A display case stretching across the next gallery in the Art Gallery of Hamilton exhibition contains letters and drawings by Kamgari, her mother’s diary pages, government forms and other materials from the family archive pertaining to their migration—confessional and tender human documents beside sterile, bureaucratic ones. Her mother was understandably reluctant to hand over the journals, but Kamgari thought inclusion of her perspective in those moments was critical, so together they selected which entries should be shared

“Leaving Iran, being in Turkey as a refugee, then coming to Canada—I have clear memories of all those things, I remember how I felt,” Kamgari says. “But I think a lot of the experiences I had and the things that I was feeling throughout the process were heavily influenced by how she was feeling: alone there with a kid. If she was freaking out or angry or nervous, I embodied those feelings without really knowing why.” Even the passport stamps are revelatory, she says, one leaving Iran, then another entering Turkey, then Canada. They’ll never be in a museum collection, nor will the diaries, but they’re no less valuable to her. “It’s proof that it happened. They’re documents that say it is real; I didn’t imagine it.”

Throughout the project, Kamgari has thought a lot about the word “journey.” “In a lot of ways,” she says, “I don’t see my experience as a refugee and an immigrant as a journey. A journey ends.” You go from point A to point B, she explains, with the idea that B is somehow better. But B isn’t necessarily better. It implies progress, and talking about progress in the context of immigration is difficult. It’s hard to discuss without placing superiority on the West. “I have to be careful not to internalize that racism,” she says, “that I’m lesser or Other because that’s what popular culture keeps yelling at me.” Beneath the valence of memoir, Kamgari’s performance asks more broadly about the conditions of living in Canada right now, and how those conditions vary respective to the body, with all its political and cultural signifiers.

A question she hears often regarding the work: Do you feel transformed? Undertaking these Herculean tasks, or so one could imagine, might stir change on the level of the self. Her inclination, however, is to say: no. She’d hoped the walk might initiate a grand metamorphosis where, upon its completion, she felt home at last, no longer in diaspora. “But I’m still navigating my experiences as an immigrant and a refugee,” she says, “whereas the video ends.”

Once Kamgari finally reaches her doorstep at the end of The Journey West, she retires inside, while the camera remains fixed on the front of the house. It stays there for an extended beat, accumulating tension, as if the finale’s false and there’s more still to happen, though the screen does go dark.

Chris Hampton is a writer who works mainly in arts and culture. His work has appeared in the New York Times, the Walrus, the Globe and Mail and other publications.

Voyage of a Lady

During the Second World War, millions of artworks and artifacts were stolen by the Nazis. Thousands of these ended up in Canada. Here is the story of one 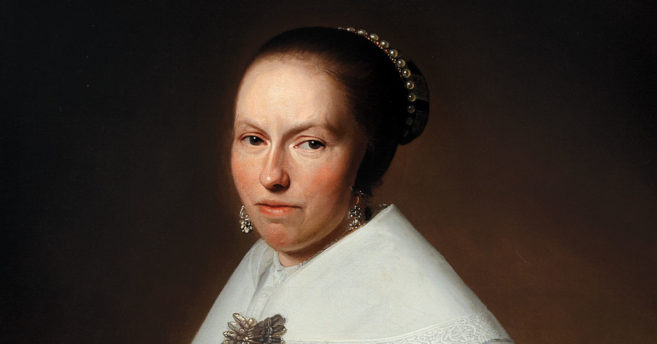