8 Reasons the Camera Obscura is Still Worth Celebrating

Camera obscura tech may be ancient, but its sculptural possibilities keep it a favourite of some artists. Giant gold nugget as imaging device? No problem. 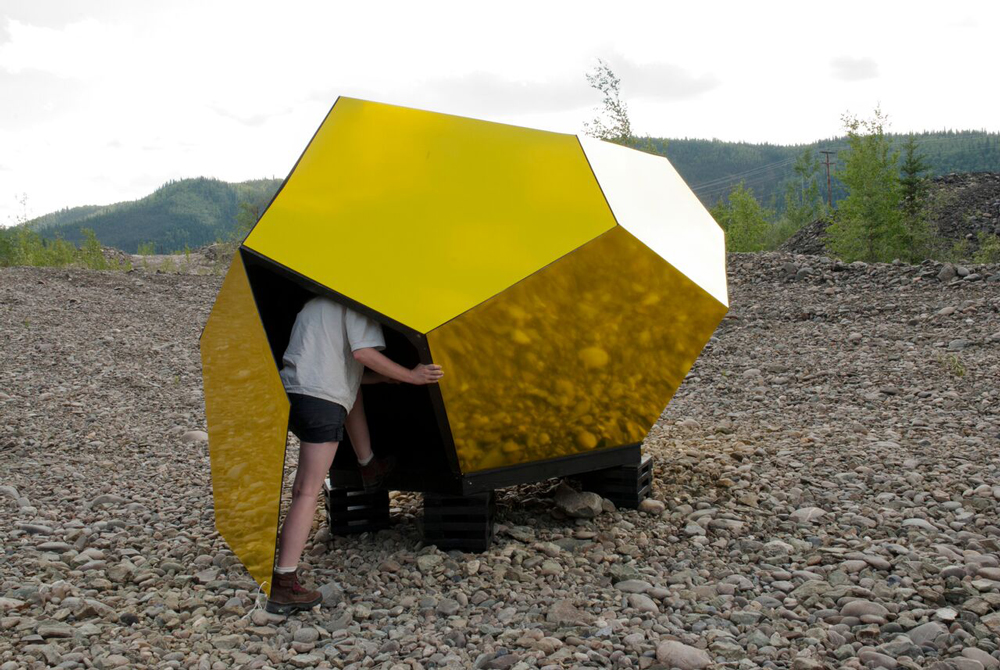 Kevin Schmidt and Holly Ward's Eye of the Beholder—a camera obscura made in the form of a large "gold nugget"—installed near Dawson City, Yukon.

Another view of Kevin Schmidt and Holly Ward's Eye of the Beholder camera obscura, with aperture visible on upper right facet.

Kevin Schmidt and Holly Ward's Eye of the Beholder installed in the hills around Dawson City.

Dawson City's George Black Ferry, with a camera obscura by Donald Lawrence installed on its side.

A passenger on the George Black Ferry investigates the camera obscura Donald Lawrence installed on the side of the vessel.

Used as early as the 4th century BC, the camera obscura is one of the world’s most ancient imaging technologies. Take a dark room, make a small opening in one wall, and an image of the outside world is projected onto the wall opposite—what could be simpler? Yet, even in the age of Instagram and selfie sticks, the camera obscura retains a strange—and perhaps, even, growing—appeal.

It’s not often you hear contemporary art curators use the words “magic” and “wonder.” But when it comes to the camera obscura, some of them still do. “It’s funny, because I’m definitely of the school of artwork need[ing] to be embedded in research,” says Kamloops Art Gallery curator Charo Neville. She also believes “needs to have a strong conceptual underlying thesis, and all these things. But when you experience seeing the camera obscura, it takes you out of that completely. It has what I guess you could call an aura. It’s magic.” She calls this effect “refreshing” compared to the usual art presentation, because “it’s kind of hard to be amazed these days.”

Design-wise, what a camera obscura needs is a dark, nearly light-tight interior. But its exterior can be just about any size, shape or form. Those conditions add up to a wide range of sculptural possibilities for artists to explore. For the Midnight Sun Camera Obscura Festival this past summer in Dawson City, artists Holly Ward and Kevin Schmidt constructed two camera obscuras that looked like large gold “nuggets.” They placed one of these on the old dredge piles of Dawson, where tailings from gold mining once accumulated, lending a neat site-specificity to the piece. In different twist, artist Lea Bucknell created a camera obscura that, on the outside, mimicked Dawson’s false-front gold-rush architecture. And artist Dianne Bos placed hers in a gold-rush-style tent—but one that was black rather than white.

Even before he organized this summer’s Midnight Sun Camera Obscura Festival, Kamloops-based artist Donald Lawrence created several projects demonstrating the remarkable adaptability of the camera obscura concept. In August 2014, he created a kayak-in camera obscura on Quidi Vidi Lake in St. John’s, Newfoundland. Later that fall, he converted a root cellar on a farm outside of Kamloops to a camera obscura—one that is still in operation and holds a guestbook for viewings.

For the festival in Dawson City, Lawrence added a camera obscura appendage to the George Black Ferry which crosses the Yukon River 24 hours a day. As well, he and his research assistants Ryland Fortie and Dion Fortie went to Dawson City’s sternwheeler graveyard and “created a walk-in camera obscura using a combination of sheet plastic, stringing it up off parts of the dock,” says Lawrence. This intervention turned the decayed old boats into camera obscuras, and workshop participants traced the projected images onto large pieces of paper. Later this year, when this camera obscura exhibition heads to Lethbridge, Lawrence plans to convert a 1920s grain bin near Nanton into a camera obscura as well.

4. The quality of the projected image in a camera obscura can be truly remarkable—almost uncanny.

Nowadays, anyone can see movies in 3-D, Imax and more at the local multiplex. So you’d think we’d be hard to impress when it comes to projected images. But, says Neville, “so many people actually will go into a camera obscura and not understand what’s happening because…if there is lot of natural light it looks almost too real…it’s not like how we experience movies or how we [usually] experience a projected image…it looks like you could actually touch it.”

5. This humble, low-tech device remains the basis for photography today.

Part of Neville’s motivation for doing a camera obscura show had to do with the fact that it was a great fit for a concurrent exhibition she’d planned on the work of photographic pioneers Eadweard Muybridge and Harold Edgerton. “What I’m always trying to do here when I bring in historical shows is to then have a contemporary element to talk about art as a constant process of innovation, and as an evolving entity,” says Neville. “Both exhibitions look at innovations in optics and optical devices, the camera obscura being the oldest form of the historical precedents of photography and [key to] our understanding of how the eye works and communicates with the brain.”

6. Art and science (and political science), combined in one elegant device.

Another neat thing about the camera obscura—as well as its recent festivals and exhibitions—is how effectively it combines “art and science elements,” says Neville. But its reference points can go beyond even those broad realms into sociology and politics, says Lawrence. He notes that Bos’s gold-rush-tent installation in Dawson City aimed to map the stars that are usually invisible over Dawson in the summertime—a kind of mapping that references “the complex social and sometimes even political histories that those imaging devices are associated with.”

7. It offers a breather from our current fast-paced imaging tech.

“I think there’s a somewhat a nostalgic inclination…back towards things that are older technology,” Donald Lawrence says regarding his own interest in the camera obscura. And he feels he’s not alone in that regard. “There seems to be an emerging, resurging interest in things that are lower-tech in response to the fast pace and somewhat physical distancing of newer imaging technologies,” he says. “At the same time, it’s about recognizing that in its day, the camera obscura was a high-tech imaging device. So looking to old technology always has a bit of a melancholic relationship to thinking about new technology.”

In recent years, contemporary artists have led a notable rise of interest in the physicality or sculptural quality of photographs (see: Letha Wilson, Wolfgang Tillmans and Erin Shirreff, just to name a few). This theme also finds a home in explorations of the camera obscura—a space in which the physical and the imagistic are intimately intertwined. It’s a combination that attracts not only art specialists, but also art novices, says Lawrence. “Public engagement and public learning seem to be propagated when things are most physical and experiential,” he explains. “In simple terms, the creation of such works is a means of combining and negotiating between interests in photography and sculpture, as well as related interests in historical forms associated with scientific inquiry and forms of popular entertainment, especially in pre-cinematic times. In essence, perhaps, I am interested in manners in which such structures as cameras obscura make image creation physical and experiential, and engage a range of histories and theoretical interests.”

The exhibition “Midnight Sun Camera Obscura” continues until March 19 at the Kamloops Art Gallery, and it will travel to the University of Lethbridge Art Gallery from August 29 to October 26. For more information about Lawrence’s wider, longer-term, international research project into the camera obscura, visit midnightsuncameraobscura.com.

This article was corrected on February 4, 2016. The original indicated that Donald Lawrence will convert a grain bin in Coutts, Alberta, into a camera obscura later this year. In fact, the grain bin will be at the Coutts Centre for Western Heritage near Nanton, Alberta.