On the Politics of Staying in Canada

Many artists leave Canada to develop their practices. Our new Fall issue, out today, is all about them. But what are the politics of leaving—and staying? 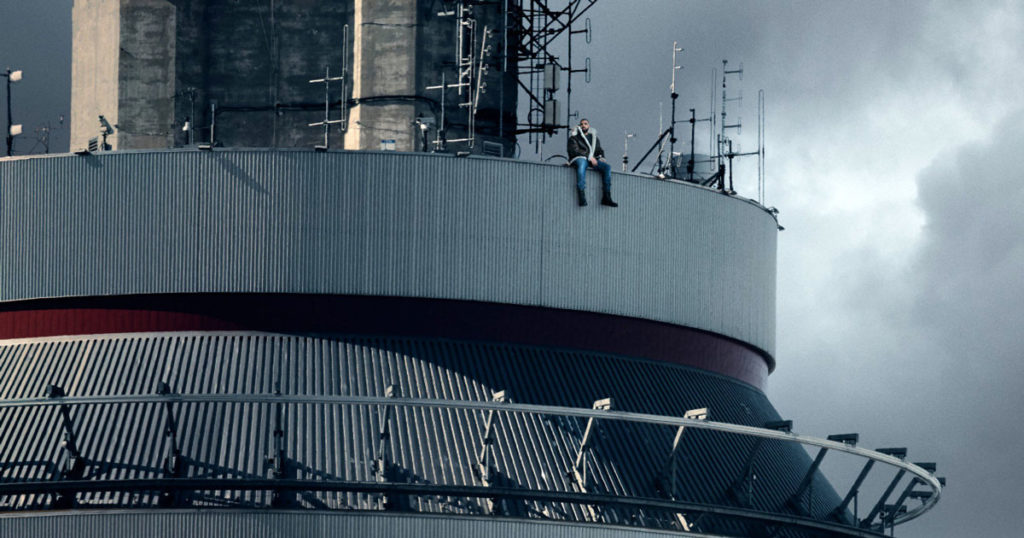 In this year of social-media call-outs, my favourite might be what happened last week with Apple and the iPhone 7—a call-out of a corporation, not a person, although the distinction seems increasingly moot. The new iPhone has no headphone jack; Apple is encouraging users to buy expensive, wireless Bluetooth headphones as an add-on. Jacobin magazine’s disgruntled response, one of hundreds, was to post a photo of the Rube Goldberg–like dongles and cords that one would need to charge the phone while also using traditional headphones (the adapter for which comes with the phone but uses the same port that one would use for charging). “Where would we be without capitalist innovation?” read Jacobin’s snarky, ironic caption.

Apple has been widely mocked for describing, at the iPhone 7’s press conference, this so-called innovation as an act of “courage.” And so my digressive segue to the theme of our new issue, “Satellites,” a loose term we arrived at to describe Canadian artists working abroad, and non-Canadian artists whose practices do or have orbited around this country. Though this is certainly a phenomenon we wanted to acknowledge and explore, I do wonder: are Canadians who move abroad for professional reasons—typically privileged, white Canadians—after an Apple-style life upgrade, one seen as courageous but with similarly convoluted, aspirational, late-capitalist dimensions?

Yes, it is difficult, even as a middle-class person, to leave one’s home country to live and work elsewhere. It is alienating, marginalizing, psychologically punishing. It is expensive. During my short time living in New York, it quickly became clear that the highs were always accompanied by demoralizing lows. Such a narrative of setting out, despite hardship, to further one’s success has tended to be glossed by a truism (however false, skewed) that one cannot succeed in Canada unless one moves away—and the catch-22 flipside that in doing so one may be judged by diehard Canadians as a traitor. As a Canadian culture worker in my late 30s, I have spent much of my adult life saying goodbye to friends who have had it, for whatever reason, with Canada. Sometimes, often, I don’t blame them. Sometimes, often, I listen to them throw shade at Canada when I get the chance to visit them. I grant them this, assuming their non-Canadian residencies have been hard won.

Mea culpa: if I had had the means to leave Canada in my early 20s, I probably would have. I was young. It was the ’00s, Harper’s horrible neoconservative Canada. Arts and culture funding was being cut. Outlets where my writing could appear were shrinking. Artists understandably feel a similar pull: the art world proper is elsewhere, and to move is to engage with it, to have more exhibition opportunities, to learn, (perhaps) to be connected to a wider community of creators. But I didn’t leave, couldn’t. And after years of wondering if somehow my life would be different, better (“better”) if I had done this, I have finally become confident in my decision to remain. And as someone who has been lucky enough to find a fantastic job in my chosen field in this country, I have the luxury to say this. Yet before this job, when, for years, I wrote and taught and struggled to make ends meet, I was engaged in a long process, not of falling in love with, but of falling in interest with, the country in which I happened to be born. I am far from a nationalist, but I can say that I am now deeply interested in Canada, specifically in the city I’ve (alternately, mostly) been in for the past 14 years: Toronto.

What are the political implications of thinking of Canada as a less desirable place to live than other Western countries with presumably more visible, active culture industries (i.e. stronger economies), such as the US, the UK, France and Germany? What are the political implications of assuming someone who leaves Canada is somehow more innovative, braver, actualized than someone who remains? And of assuming that someone who remains is doing damage to their career trajectory?

Floating in the charged online ether this summer were two articles pertinent to such questions. One was a Globe and Mail interview with ex–Museum of Contemporary Art Toronto Canada CEO Chantal Pontbriand in which she called Toronto a “city of emergence,” a term, according to the piece’s writer, James Adams, that she uses to describe places “we’d never thought could become a centre of international attention with regard to the development of contemporary art.” A week earlier, Stephen Marche published an article in the Guardian with the cheeky title, “Welcome to the new Toronto: the most fascinatingly boring city in the world.”

Both Pontbriand and Marche have more nuanced things to say on this subject than such quotes and headlines suggest. Marche’s piece in particular fleshes out ideas of Toronto as a site of negotiation, with which I agree, and to which I shall shortly return. But the cursory interpretation of these sentiments is profoundly tricky, even offensive. Are cities merely in “emergence” until the contemporary art world deems them fully formed? I respond to Marche’s title with a quip from Joan Collins: “If you’re bored, you’re boring.” If you are convinced that you are, or have arrived, in a backwater, instead of leaving, why not ask: What am I not seeing and why? What am I not offering that might in turn be impairing my sight?

Toronto is hardly a place in which one need feel trapped, like some doomed patrician heroine trying to escape provincial torment in a Modernist melodrama. As Marche points out in his piece, Toronto, along with many places in Canada, is a haven. And though it is expensive, Toronto is a city where marginalized people can find a degree of diasporic community. It is important not to overstate this: like many Great Lakes cities, Toronto is unbeautiful and workaday, its winter bleakness often a shock to those seeking refuge here, many of whom come from places where a culture of aesthetics and community is more ingrained. As with other large cities, gentrification has pushed Toronto’s non-white populations to its margins. Toronto has a race problem. But to denigrate Toronto (and Canada) as boring, as void, is a caustic, entitled act of arrogance and ignorance. I’m not talking about WASPy, who-do-you-think-you-are, tall-poppy stuff we see in classic CanLit (or Joni Mitchell albums), where the yokels dismiss the ambitions of young, critical intellectuals. I’m talking about racism, classism and neocolonialism—glib blindness to one’s own privilege. Calling Canada boring is disturbingly apolitical, giving the mistaken impression that nothing happens here—nothing bad, and nothing good.

“Experiencing something as ‘nothing’ is an act of misrecognition…It is a leftover of the colonial mentality,” says artist and curator Luis Jacob in our Fall 2016 issue, about his just-opened survey show of Toronto artworks at the Art Museum at the University of Toronto. As Caoimhe Morgan-Feir, Merray Gerges and I pointed out in our review of the Art Gallery of Ontario’s Lawren Harris show this summer, an understanding of Canadian culture, especially of art, as defined by some sublime, so-called uninhabited land, a terra nullius—the blank space of a colonial purchase document from which anyone but the most hardened, intrepid, masculinist explorer would want to flee—ignores and denigrates Indigenous cultures and histories. For one, it casts a deaf ear on the rich communications, indeed interrogations, offered by nature, by land.

Nowhere is perfect. Canada’s significant baggage is the stultification—the paralyzing, toxic and historically murderous social fear—brought on by its colonial-monarchist origins. On my more optimistic days, I hope that, recently, we have made a progressive change from a Molson Canadian–style “I Am Canadian” identity, with its stupid, isolationist bravado, to the collective “We the North,” the Raptors’ slogan. These latter words implicitly acknowledge black Canada, which has supported the Raptors before it was cool. More broadly, they appear to uphold collectivity, collaboration and hybridity.

I have travelled a lot over the past few years. This year, largely due to my job, I have decided to stay home. As a result I’ve greeted many travelling friends from other, sexier cities—New York, Berlin, London. All of them were impressed, some envious, of my home. One, a writer born and raised in New York, visiting in June, a glorious month anywhere in Canada, said, after I hemmed and hawed about not leaving Toronto: “What reason would you have?” Conversely, months earlier I had received an email from an ex-Torontonian now living in New York, in which she self-consciously urged her remaining, interesting friends to entertain a visiting artstar: “He is bored and would be happy to meet you.” I didn’t oblige—why should I have to prove that there is a here here? (Earlier this year, an American critic approached me with what he seemed to assume was a compliment about Canadian art and culture, and it came off as extrapolated manifest destiny: “So much is going on here; you need an ambassador to tell the world about it.” Do we now?).

Last month, Canada ostensibly rallied around the Tragically Hip’s last show. As a white queer, I felt numb. This wasn’t at all my thing, my Canada—and as an insightful conversation among Anupa Mistry, Chantal Braganza and Navneet Alang on TVO’s website suggested, I wasn’t alone. (Mistry: “I didn’t watch the final concert; I was at a friend’s house on a quiet Bloordale street, dancing to soca and Afrobeats with my friends who grew up across the GTA in very Canadian communities, like mine.”) However admirable or complicated their artistic intentions, the Hip offers an easily digestible and definable Canadian identity, one forged in a rural-colonial whiteness from which it is understandable to want to exit. (Kaari Sinnaeve, Canadian Art’s Partnerships and Marketing Manager, cleverly described the problematic, caricatured nationalism around the Hip’s farewell concert as “Cansplaining.”)

On the title track of his new album, Views, Drake attempts a braggadocio that characteristically ends up existential and self-effacing: “I get a blank page when I try to draw a comparison.” This is my Canadian pride. Uncertainty, uneasiness at nationalism, which sets the stage for its political deconstruction; contestation and questioning; an amorphous understanding of self that comes from assiduous, quiet observation—none of this is boring. To borrow a phrase from Chicago artist Theaster Gates: I am interested in the politics of staying.

David Balzer is editor-in-chief at Canadian Art. Our Fall 2016 issue, “Satellites,” is on newsstands across the country from September 15 to December 14.