What Now: A Reconsideration of Futures

Our Winter 2017 issue is themed on “Futures.” How is our relationship with futurity changing? The short answer: we are living what's next, now. 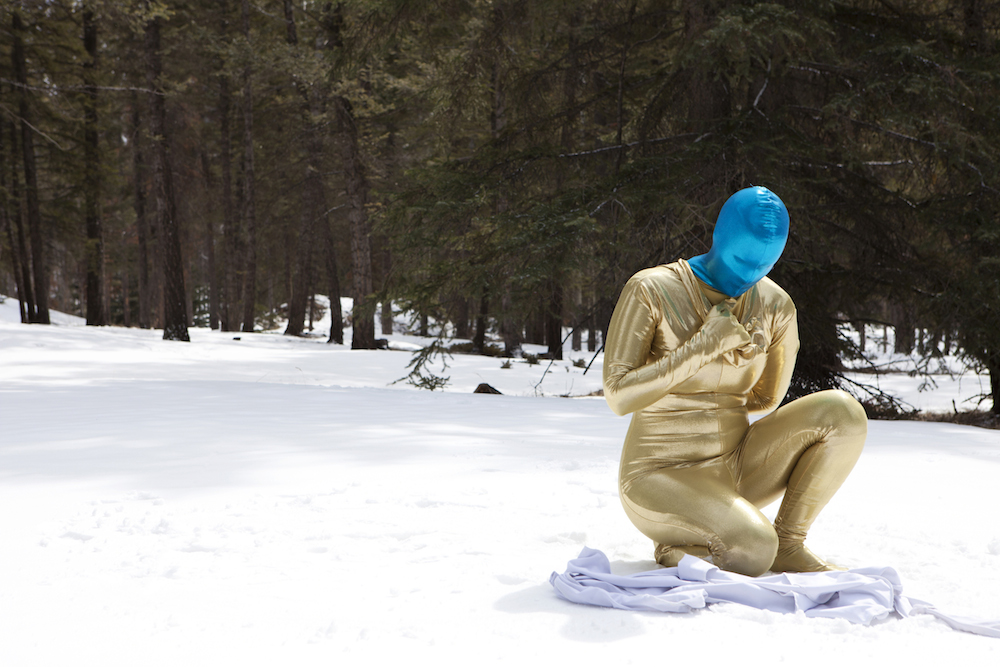 Amy Malbeuf's performance Unbodied Rebirth (2011) is one of the artworks discussed in Julie Nagam's essay on Indigenous cultures and the future in the Winter 2017 issue of Canadian Art. Photo: Dayna Danger.

I’ve dwelt for years on the first lines of T.S. Eliot’s Four Quartets, which lately replay in my mind through the voice of Lana Del Rey, who speaks them, with dependably kitschy somnambulance, on her last album: “Time present and time past / Are both perhaps present in time future, / And time future contained in time past. / If all time is eternally present / All time is unredeemable.”

I’ve dwelt on these lines particularly this year, before Trump became president-elect, before Brexit, and with extra obsession as we prepared our newest issue themed on “Futures.” The theme, initially imagined as “The Future,” was suggested in January by our managing editor Rosie Prata, with thoughts of the forthcoming US election and, in general, of seasonal/yearly turnover. It felt apt, vaguely and gently so. In summer, as we assigned the issue, our editorial resident Merray Gerges suggested we change the theme to “Futures”—to be more inclusive, and also because really, you never can tell.

We have subtitled the issue (surreptitiously this time, on the magazine’s spine), “the brave new present.” At the time I wrote that subtitle—when we were about to close the issue, less than a week before the US election—my thinking was not apocalyptic but playfully ironic, and hopefully ruminative. My primary thought: to consider the future is really to consider the present. Our cover image, a gorgeous flatbed-scanner collage by Vancouver artist Derya Akay, with the “strength” tarot card in its centre, suggests all the humble ways in which futurity can indeed be present. An Adderall not yet taken; a drying sprig; a moldy potato shooting out sprouts; a clean but used paint brush.

Futurity is one of the main ways one can tell the modern from the contemporary, thereby gauging the profound shift of the avant-garde. Modernism imagines a future full of industrial inventions and robust, swift change. The contemporary sees “futures” as banal and quotidian, but also non-tangible and thus acutely threatening. Think Black Mirror: the future is superficially indistinguishable from the present; the future is now; the existing concept of futurity is essentially of devouring interiority and autonomy, of an outward rather than a forward sensibility that can feel dangerous, because it is hyper-conscious of prescribed social relations and broad-scale, corporatized outcomes.

There is a sense recently, heightened as we watch the US move from Obama to Trump, of shifting from a reconsideration of history to a reconsideration of futures. I have written about the former before: how a defining facet of Obama’s presidency has been a reawakening of the idea of history from its postmodern, neoconservative slumber. History is watching us, declared Obama, over and over. But as we assess the (quiet) last days of Obama’s presidency, we might surmise, as we also might of Trudeau’s newer prime ministership—which, this week, disappointingly green-lit the Trans Mountain pipeline—that a neoliberal historical renaissance is hypocritically selective. Ask Syrians what they think of Obama’s legacy. History doesn’t just tell lies through what it records, but through what it elides. Obama wanted to make history great again. What we have learned is not only that this is no easy task, but also that it can purport justice, while producing propaganda.

If we are entering into an era of reconsidering futures—the attitude of which might be summed up by the declarative and interrogative interpretations of the phrase “what now,” the theme of tonight’s First Thursday at the Art Gallery of Ontario, where we will be launching our new issue with a series of talks—it is notably reactive, not proactive. This is not new to humans, but it is to the bourgeoisie at present, particularly to young people. Brexit’s biggest supporters were over 65 years old. Only around 37 per cent of US voters between 18 and 29 voted for Trump, who, as has been widely reported, received an overwhelmingly large proportion of the white vote, even though Pew Research and many other experts predict that in a mere 50 years, whites will not be a technical majority in the US. We are increasingly hearing “too late” in discussions of global warming—a bitter antidote to the stern “act now” imperatives of the ’90s and ‘00s. In so many senses, we know what’s coming. We’ll have to prepare, but don’t quite know how.

How does art prepare? The major artworks of the 21st century so far (and we’re not that far) feel daydreamy, motivated by assessment, negotiation with the past, the archive: Geoffrey Farmer’s Leaves of Grass, Christian Marclay’s The Clock, Camille Henrot’s Grosse Fatigue. When they are not this, they seem beholden, however critically, to the epic (Frances Stark’s My Best Thing, John Akomfrah’s Vertigo Sea). What now, what next—as a topic in art, it lies in waiting, at least in the form of an answer, if that is even desirable. Uncertainty, dressed in a kind of mute, static confusion, is, as critic Saelan Twerdy inferred in his review of the Montreal Biennial for MOMUS, all contemporary art, at least in its established market forms, can give. Last week, I had a discussion with a friend of mine about a favourite cultural-studies writer who, I felt, had lost touch with current trends, to the detriment of her work. “But we don’t need that kind of work now,” he proposed. Instead of past knowledge glossing the present, as it does in cultural studies, we want not just revision (of the canon, say) and speculation, but readiness—while fearing the categorical aspects of this. This is its own, particularly neurotic form of dread.

A reconsideration of futures comes out of a reconsideration of history. It is obvious but bears repeating: we are living in a time in which what has been ignored can no longer be ignored, what was thought to have been resolved has very evidently not been resolved. This is of course the thrust of Black Lives Matter, of Standing Rock: what protects you does not protect us/you; you/we are on land that was violently taken from us/by you; “home” can cost the most paradoxical price. What now? Things can no longer be pushed down.

Dread is where the optimism lies. In the context of my white neoliberal education, I consider Sebastian’s clipped, proto-Enlightenment statement in Shakespeare’s The Tempest: “what’s past is prologue, what to come / In yours and my discharge.” In our new issue, Rea McNamara profiles artist Camille Turner, who has made work on Canada’s hidden history of slavery and, now, on Afrofuturism. Says Turner, “I often feel like what I am doing is science fiction…You know, to cavort with the ghosts is what I think about, because these things haunt the present, and sci-fi is a great language for connecting with the ghosts.” Elsewhere in the issue, Julie Nagam profiles several Indigenous artists who are using future-facing technology both to reinforce and to rearticulate a relationship to land. “The land speaks,” Nagam writes. “Our ancient stories are futurist…Artists have the ability to translate these stories into visual narratives. Indigenous artists mobilize ancient knowledge to mark, map out and foresee the future.” What now? Listen.

David Balzer is editor-in-chief and co-publisher of Canadian Art. Our Winter 2017 issue, “Futures,” is on newsstands across the country from December 15, 2016, to March 14, 2017. To get every issue of our magazine delivered to your door before it hits newsstands, visit canadianart.ca/subscribe.