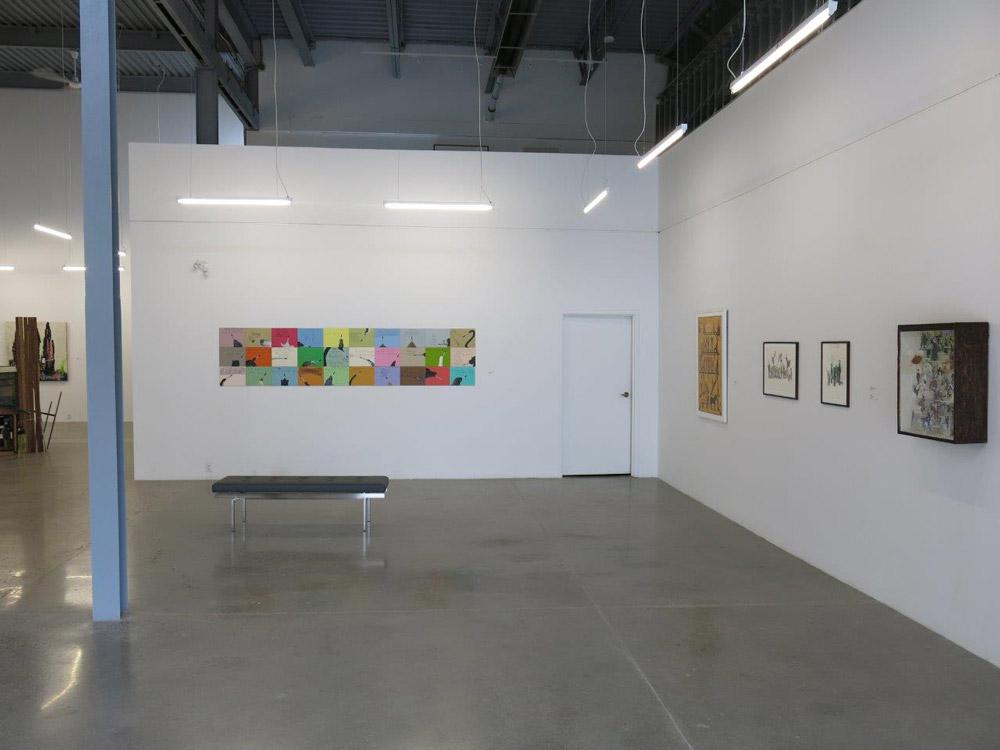 In 2008, Winnipeg’s Royal Art Lodge disbanded following more than a decade of collective art production. Now, the exhibition “After the Royal Art Lodge” at Toronto’s Division Gallery serves as a reunion of sorts, showing mainly post-split works by five of RAL’s six founding members: Marcel Dzama (now based in New York), Jon Pylypchuk (now based in Los Angeles), Adrian Williams (now based in Berlin), and Neil Farber and Michael Dumontier (who continue to be based in Winnipeg, and who collaborate on drawings, paintings and other projects).

In a collage painting titled vomit all your fears of life into the belly of the earth only to have them shit back in your face (2013), Pylypchuk layers sand and stones mixed with paint to create a dirty, grimy world. Two rectangular-faced figures stand on top of what looks like a mound of burning coal; pink and neon-green streaks stream down the canvas like burning lava or, indeed, another type of eruption. For a different Pylypchuk selection, one of his crudely built shantytown works stands in the middle of the gallery. It is inhabited by creatures with wooden stick legs and large eyes who look like they can barely hold themselves together, a state that mirrors the ramshackle condition of their surroundings. Pylypchuk uses scraps of wood, metal and fabric to create a strange bricolage that feels at once nightmarish and familiar.

Dzama’s diorama The Horsemen Flee (2010) is a chaotic tableau featuring cut-out figures of twirling ballerinas, grand-jetéing men and pas-de-deux partners who look like they might uncontrollably spin offstage. Darker aspects of the work are often hidden behind the principal dancers: while some ballerinas in the foreground extend their legs in arabesque, others behind spread their limbs more erotically. Each dancer seems to be moving to a different rhythm, and, if the work itself made music, it would be the cacophonous sounds of a discordant orchestra.

In a series of paintings by Farber and Dumontier, street signs with arrows pointing in opposite directions—one labelled “everything,” the other “nothing,” or one labelled “this way” and the other “that way”—stand in the middle of small scenes showing a bright blue sky above a clean line of grass. On the opposite wall, three rows of ten paintings from their Animals with Sharpies (2013) series are arranged. Markers held in mouths (or beaks) scrawl sometimes amusing, sometimes serious statements. A duck admits, “I’m losing my mind.” Meanwhile, a mouse rages, “Dear cat asshole, how would you like it if I ate your husband?” These are definitely not illustrations from a children’s book.

The works in “After the Royal Art Lodge”—which also includes drawings by Adrian Williams, though nothing from sixth founding member Drue Langlois—deserve to be looked at closely. For anyone who is a fan of the collective, or even for those unfamiliar with their work, this exhibition thoughtfully frames what has been made since its passing, in celebration of a legacy of collaboration.