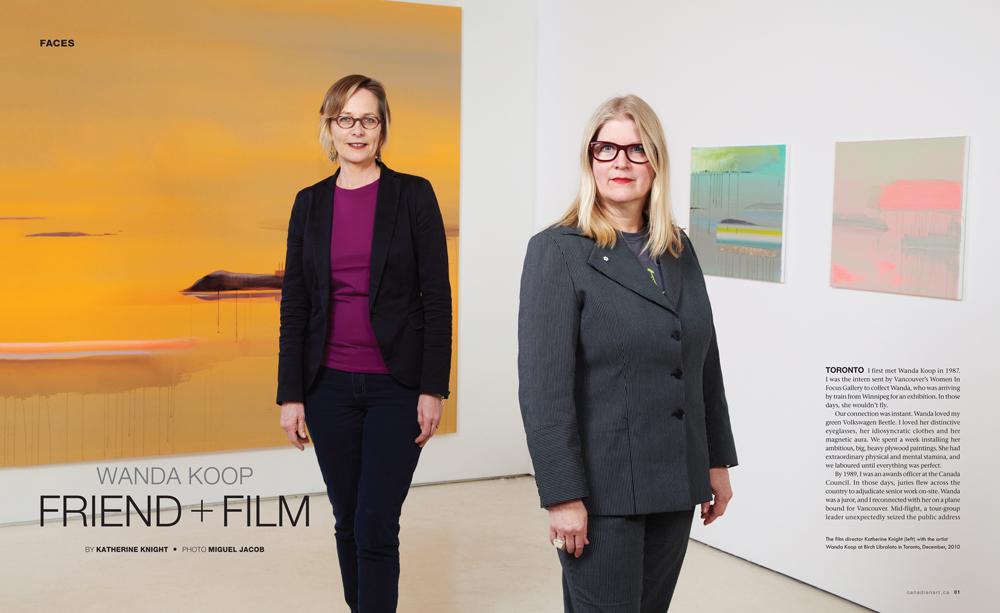 Spread from the Spring 2011 issue of Canadian Art

TORONTO I first met Wanda Koop in 1987. I was the intern sent by Vancouver’s Women In Focus Gallery to collect Wanda, who was arriving by train from Winnipeg for an exhibition. In those days, she wouldn’t fly.

Our connection was instant. Wanda loved my green Volkswagen Beetle. I loved her distinctive eyeglasses, her idiosyncratic clothes and her magnetic aura. We spent a week installing her ambitious, big, heavy plywood paintings. She had extraordinary physical and mental stamina, and we laboured until everything was perfect.

By 1989, I was an awards officer at the Canada Council. In those days, juries flew across the country to adjudicate senior work on-site. Wanda was a juror, and I reconnected with her on a plane bound for Vancouver. Mid-flight, a tour-group leader unexpectedly seized the public address to announce lunch in a foreign language. Wanda experienced it as a crisis, not a menu. It was her first flight after rounds of hypnosis to overcome her fear of flying, and I spent the rest of the trip with her clamped to my arm.

According to Wanda, I once rescued her from the Art Gallery of Ontario after a migraine left her temporarily blind. I only remember Wanda helping me: spoiling my daughter and reminding me that, while earning a living might be fine, I was a good artist and I should get to it.

In the 1990s, I stayed a few times at the Winnipeg house that she lived in for 30 years. The basement was full of clothing: dozens of vintage winter coats, cowboy shirts, shoes and hats. The living-room couch (a white, curving model from the 1950s) changed colour with every new hand-sewn cover. I don’t remember her cooking or watching television. I do remember the cold, 20-minute walk across town to her fifth-floor warehouse studio. The space scared me at night, but Wanda never seemed frightened—even after paintings were vandalized during a break-in, and a decade of paper works were lost to smoke damage from a nearby fire. I remember Wanda’s constant financial juggling, the pressure of ambitious shows and the always-in-time, miraculous sales. There was also the warm, steady presence of her mother, sisters, nieces, nephews and her then-partner, William Eakin. Winnipeg was always her home and her community.

In 2001, Wanda turned her life upside-down. She sold the house, bought an industrial building—the National Wiper Factory—and converted it into a studio under great duress. When I first saw her new space, it mesmerized me. I wanted to stay there all day, pace its perimeter, watch the light change and hang out in the kitchen. I began to visualize a film centred on Wanda’s relation to light, space and colour. I visited a couple times and brought my video camera. Wanda’s current partner, Stephen Hunter, watched me work, and one day hauled out his construction scaffold to give me another perspective. Maybe it was then, up on the scaffold, looking down the length of the studio toward my favourite Sightlines painting, that I first thought about taking Wanda—and my camera—out on the freighter that serves as the setting for the film KOOP.

Painting is private for Wanda. She allowed me to film her sketching and preparing, but never painting. The ship offered a neutral space, where we were all equally on-edge. I knew that Wanda would like the Birchglen bulk carrier, and that the ship would like her. We were guests of Captain Bob Wilkie, alongside whom I had studied at the Nova Scotia College of Art and Design in the 1970s.

Wanda, cinematographer Marcia Connolly and I boarded the Birchglen in Quebec City via a rope ladder that was almost three storeys high. We ate giant meals, and spent our days on the bridge and our nights waking up whenever we approached a port or a city—seven days on the St. Lawrence River. The ship somehow possessed the familiar quality that a studio has before or after you start new work, when the outcomes aren’t clear and you have to just be with it.

The film, which debuted at the Canadian Art Foundation’s Reel Artists Film Festival in Toronto in February, tries to get inside the studio that Wanda carries in her brain. It is a film about her imagination, about how she sees, and about being an artist, making work and not giving up—the whole fantastically great process.