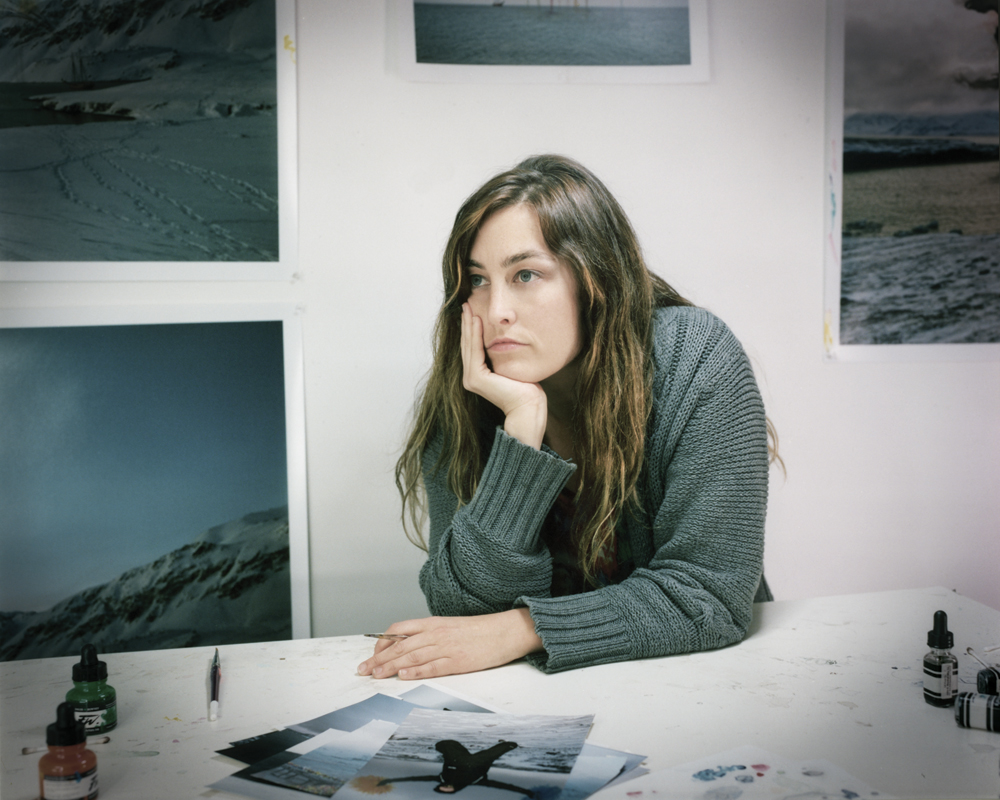 The Arctic’s vast splendour was almost more than Sarah Anne Johnson could bear. It was engulfing—too beautiful—and it raised conflicting feelings. “If I am standing here, it’s over,” she thought.

Known for making journeys that become the subject matter of her work, Johnson travelled to the North in 2009 with the Arctic Circle, an expeditionary residency program bent on consciousness-raising. Led by Aaron O’Connor, the annual program takes artists, scientists, architects and educators to the Svalbard archipelago, which lies in international waters midway between Norway and the North Pole. According to the organizers, this shared experience of exploring “remote and fascinating destinations” is intended to facilitate participants’ engagement “in myriad issues relevant to our time.” And, to this end, the program supports “the creation and exhibition of new and pioneering work,” whether collaborative or individual.

Johnson’s response to the experience, Arctic Wonderland (2010–11), is a series of 20 photographs that mixes amazement, regret, brooding melancholy and irony. The expedition was such an exclusive privilege that “I began to feel guilty,” Johnson says. “How do you make art about a cause?” In three Arctic Wonderland works, she wryly envisions herself and her fellow travellers as cheerleaders, leaping into the air or building a human pyramid, showered with confetti. She staged these photographs in situ; the rest of her images are straight views of the landscape.

All of the photographs are in colour. Back at home in the studio, Johnson transformed them into apocalyptic images of still, silent and terrible grandeur—by painting on their surfaces with various types of ink or gouache, by scratching into the emulsion, by embossing them with geometric shapes, or by inserting a new detail, like a cheerleader’s banner, with Photoshop.

Johnson participated in the first of the Arctic Circle’s expeditions. For 18 days in October, 14 artists and two scientists from several countries lived and sailed aboard the Noorderlicht, a hundred-year-old, two-masted schooner manned by a crew of four. (The ship is the same vessel used by Cape Farewell, also featured in this issue.) Johnson, a 35-year-old artist based in Winnipeg, shared a cabin with Yi-Ching Chung, a young, Taiwan-born scientist who now works at the Centre for Earth Observation Science at the University of Manitoba, studying the effects of snow and blowing snow on sea ice. Living in such tight quarters, Johnson says, everyone was forced to be on their best behaviour.

Once underway, the ship stopped daily, at planned destinations—like abandoned coal mines or massive glaciers—and at unplanned destinations, when the group encountered something unusual. A bell was rung to alert everyone. One day, the schooner came upon seven polar bears feeding on a whale carcass that had washed up on shore—an event rarely witnessed in the North. “We can smell it easily a few hundred yards away, it’s probably been there for months,” the philosopher and author David Rothenberg wrote in a blog entry posted to the New York Times.

“The sea was rough, the cameras and computers were pitching to the floor,” he went on. “Wine glasses were breaking, milk spilled onto the floor. Waves from the sea sprayed us head to toe in the tiny Zodiac as we made rough landings on shore. The light is indescribable, the snowy peaks stretched into the distance forever. The immense loneliness zeros straight in on the sublime, where the land is great because we are so small.”

For half of the expedition’s visits ashore, Johnson stayed on shipboard. “It was so overwhelming, I needed to slow it down,” she says. “I needed some alone time to process stuff. I’m pretty slow about processing. Every time I went on shore, it was so epic it was enough.” In the time she spent onboard, she worked on small Sculpey figures that portrayed her companions and herself as cheerleaders. She completed two of these sculptures, but did not include any figures in Arctic Wonderland—unlike her other series, which feature figures as free-standing sculptures or as the subjects of photographs that tangle the relations between fiction and reality.

Among the hallmarks of Johnson’s process as an artist: adventure, and a penchant for brief stays in isolated, close-knit societies faced with difficult conditions. She is an explorer as much as an adventurer, one who seeks utopian communities and the experience of the sublime in nature while simultaneously “poking fun at all that.” Tree Planting (2002–5), a series based on three summers Johnson spent planting in the boreal forests of northern Manitoba, set the template. The Galapagos Project (2005–7) followed a journey to the archipelago of volcanic islands scattered around the equator in the Pacific Ocean, west of Ecuador. Johnson was there with volunteers who planted indigenous vegetation after hacking out multifarious foreign species that had been invading the unique ecosystem.

In the Forest (2006) drew on Johnson’s memories of camping adventures. House on Fire (2008–9), a set of altered photographs, small bronze sculptures and a dollhouse, is based on the experiences of her grandmother, who became an unwitting subject of mind-control experiments during the 1950s; the dark, eloquent series, which enters the territory of fairy tales and myths, explores the wilderness of a troubled psyche.

A question had come up for Johnson while she was making The Galapagos Project. This series was an art idea—a different proposition from Tree Planting, which she began as her thesis work for the MFA in photography she received from Yale University in 2004. Tree Planting was about her life, especially the experiences of the first magical summer in the Manitoba wilderness. In the Galapagos, she realized she was there to make art, and it was not the same kind of experience at all. “So I was constantly, like, ‘Where’s the art? Where’s the art?’ It really threw me for a loop,” she says. “Once you become self-aware, how do you make work that is honest and fresh and not contrived? I couldn’t verbalize what I went through until just recently.”

With House on Fire, shown at the Art Gallery of Ontario when Johnson won the first Grange Prize, she journeyed into the past to explore her grandmother’s trauma and how it had affected the entire family. And with In the Forest, she says, “I was trying to see if I could enjoy making work that was just about powerful experiences I’d had, or if I needed a great purpose or organized experience with a political ideology to make work I was happy with.”

The opportunity to go to the Arctic raised the same art-versus-life issues as The Galapagos Project. Johnson told herself, “I’ll go and see if I can get past it and use it and be honest about it, but not make shit work that’s just about being an artist in the Arctic.” Her initial plan was to focus on the residency itself. “But the impact of the place was so overwhelming,” she says, “and then after coming home it took four or five months to settle in, and then it wasn’t just about the residency anymore, there were bigger issues that were coming to fruition.” The biggest issue was what human presence is doing to the Arctic. “It is so perfect and so beautiful,” she says, “and it has nothing to do with us. We could only hurt it.”

Confronted by the ancient face of a spectacular green glacier, Johnson had to turn away. “I was busying myself with my backpack because I couldn’t handle how gorgeous it was, and then I stopped caring about the tears that were swelling up in my eyes and just gave into it.” This cold, austere place was also dangerous, something she says she didn’t allow herself to think about. “It’s the wildest place I’ve ever been,” she says, acknowledging a twinge of fear. “The weather could turn on a dime; you needed all this gear and skills to survive. It was clear I could not survive there on my own.”

Whatever else had occurred on previous trips, Johnson encountered the full force of the sublime in the Arctic. She was left with a question: Having experienced the awe and terror of the sublime, and knowing the truth about the Arctic, what would she do with her experience? Johnson did her research—not into the Arctic’s history or the ways it has been represented in art, but into a future predicated on the disastrous effects of climate change, colonization and economic exploitation.

Arctic Wonderland imagines a place suspended in a past/present/future time, whose character is in part a pristine wilderness, a theme park and a magnificent, fragile ruin. The schooner’s tiny appearance in two works points back to the days of Arctic exploration, but people wear contemporary outdoor gear. Ominous clouds, black and tinged with colours, hover in the air over Party Boat (2011); a huge, incongruous black box, tall as a building, looms up in the landscape; a dark cloud blocks the sun; and a nimbus-like bubble protects a snow-covered island as if it were a holy relic.

Johnson represents an imagined future as a compound tense, a future present already past. In Party’s Over (2011), confetti is piled on the conveyor belt of an abandoned mine. In Circling the Arctic (2011), the lone romantic figure, dwarfed by the sublime landscape she surveys, becomes a photographer with a tripod and camera; its lens is the centre point of a radiating grid scratched into the photograph that casts a net over everything in sight.

Johnson’s vision is of the negative sublime. Laying inky painted images over the pristine surfaces of photographs that depict the Arctic landscape with the clarity of myriad fine details, celestial colours and mystical light, she imbues the scenes with her conflicted feelings: her guilt at being there, her worries for the future, her sadness. Place has an important role in Johnson’s work—what could be more different than the archipelagos of Galapagos and Svalbard?—but landscape is not really her subject. She is concerned with people, with how they behave in the landscape and how they manipulate it.

In Arctic Wonderland, painted images interrupt the photographic sublimity of a moment frozen in time, putting a human touch on what at first glance seemed to Johnson “old and wise and untouchable.” These are dialectical landscapes; they collapse past and future, carrying two thoughts simultaneously. The Arctic sublime today must contain intimations of both rapture and apocalypse.