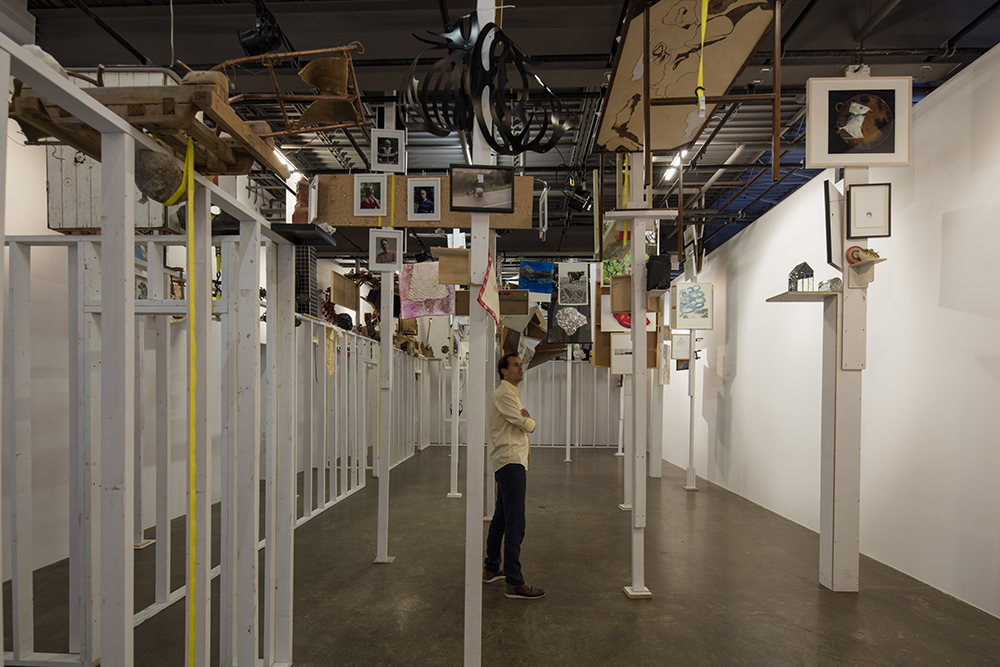 I’ve known many artists, and I can’t say the compunction to share the spotlight is a very common trait among the breed. That alone made Samuel Roy-Bois’s project in celebration of Quebec City artist-run centre Œil de Poisson’s 30th anniversary a cool and unusual accomplishment.

“I didn’t want to exhibit alone,” he says on the sun-kissed deck café of the Méduse art complex that houses Œil de Poisson. The centre approached him on this auspicious occasion partially because of his relationship to this city. Roy-Bois was born in Quebec City. He moved to Montreal to study in the late 1990s, then to New York for two years before ending up at his now-permanent home in Vancouver in 2006, where he teaches sculpture and heads the interdisciplinary Research Studio for Spaces and Things project at the University of British Columbia’s Okanagan campus. He’s exhibited all over the world and is fascinated by subjects like space, architectural traces and the way built systems affect human interaction.

In pursuit of his recent interests in the curatorial dynamic and the idea of community in art, as evidenced in recent projects at SFU Gallery, Oakville Galleries and Carlton University Art Gallery that made use of the goodies in the three institutions’ rich vaults, Roy-Bois shunned the solo spotlight of this invitation by devising an artsy pyramid scheme, ergo the exhibition’s title: “La pyramide.”

“I invited two artists I admire to participate: Geneviève Chevalier and Claude Bélanger, and asked them to contribute one artwork to the exhibition each, with no further instruction than that. It could be any medium, any size, so long as they took on the responsibility of shipping it. Then I asked them each to invite two artists or artisans of their own, and so it went, until we hit 175 participants—it only took a couple of weeks. Like a Ponzi scheme, but a little more honest. I love the system of it—and I really enjoyed the loss of control.”

To frame these artworks, so to speak, Roy-Bois built a complex structure in two-by-fours that creates a sort of maze through the gallery’s main space, like a construction site before the drywall has gone up. He propped the artworks he received—from massive sculptures the size of a small donkey to tiny drawings the size of business cards, some by artists he knows, many by people he’d never met—atop that structure, giving them a unique, looming power over the visitor. “I wanted to display them all on an equal footing, without favouring one work over another—kind of like an Internet effect,” explains Roy-Bois. “Everything happening all at once. It’s an experiment I began at SFU, Oakville and Carlton, to see if, when stripped of the usual calm serenity of a typical art space, art maintains its power.”

In a word: no. The power of the whole experience is undeniable, from the chaotic bazaar-effect first impression to the awkwardness of shimmying between the planks and the crick-in-the-neck sense that you’ll never see all the art that’s perched above your head. But the individual significance of each piece is no more. All the unlabelled pieces, as evocative as they may be in solo form, have here given their soul for the greater good, this soliloquy on the community structure intrinsic to artist-run centres like this 30-year-old mainstay. It’s an honourable death—or rebirth.

In true Roy-Bois form, the wooden maze isn’t a random structure: it represents the approximate floor plan of Œil de Poisson’s original space, before it moved into the Méduse complex 20 years ago. He reconstructed this architectural footprint (the exact shape of which he was too young to remember well) from archival photographs and discussions with people who used to work there. Architectural memory and its effect on human life has a special place in Roy-Bois’s heart, and this simple nod to the past is like an inside joke for the old guard that adds an extra sweetness to the whole project. Œil, here’s to the next 30!