Locked Up: Geoffrey James at the Kingston Penitentiary

The Kingston Penitentiary closed in 2013 after some 180 years as one of Canada’s most notorious prisons. Photographer Geoffrey James provides a portal into prison culture with his complex, deeply ambivalent images, writes Sharday Mosurinjohn. 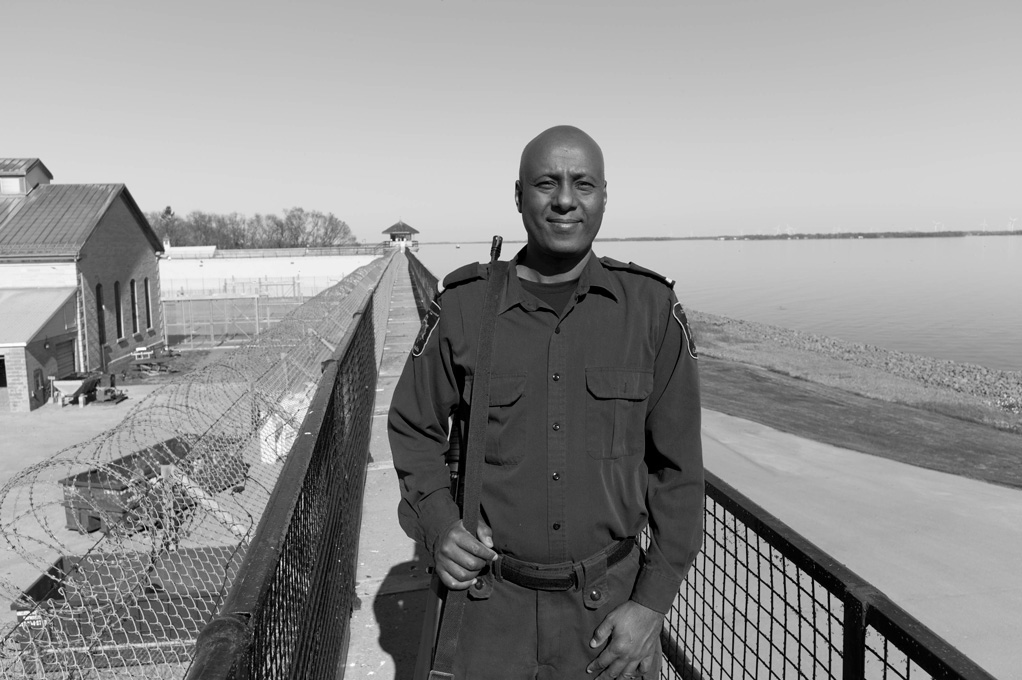 For Geoffrey James’s recent exhibition of photographs of Kingston Penitentiary at the Agnes Etherington Art Centre, visitors entered through the small Samuel J. Zacks Gallery, where the walls displayed a selection of eight archival pigment prints in thin wooden frames. Through glass doors, they could glimpse the rest of the 44 photographs in the show. With much deliberation, James, along with curator Jan Allen, had organized the selection from a vast array of images made before the infamous prison closed in 2013.

James’s show, and the accompanying publication, documents a piece of local Kingston lore and Canadian carceral history. KP, as it was known, was guarded from outside scrutiny as closely as its prisoners were guarded inside its walls. To realize the series, the Toronto-based photographer spent an intense six months shooting among the inmates and administrators, whose presence animates the prison’s sometimes brutal, sometimes beautiful architecture. The result is a striking series of images that evoke dense, complex and ambivalent moods.

According to an article on James in Maclean’s, every application “to give Canadians a rare taste of daily life inside the country’s oldest, most infamous lockup… was either ignored or refused—except one.” James goes on to explain, “I didn’t go in there thinking: ‘Oh, I’m going to photograph this person or that person.’ I was actually trying to photograph the life, the routine, the spaces—the feeling of the place.” In keeping with his extensive corpus of previous work, the artist’s approach was purposeful, but had no agenda; just an appreciation for the power of contemplation and a respect for historicity.

In a 2003 “Meet the Artist” interview for the National Gallery of Canada, James remarked, “the moment you start dealing with the human figure in the landscape it becomes another type. It becomes anecdotal and I’m not interested in anecdote,” noting, however, that, “sometimes the absence of people can denote loss or social problems.” In the collection of views inside Kingston Penitentiary and on its grounds, there are some scenes—the quasi-domestic settings of prison cells and family-visiting units—that are poignantly devoid of habitation. These pictures do indeed remark on issues like interrupted family life (Child’s room, private family visiting unit) and the consolidation of Canada’s prisons (Recently vacated cell with milk cartons, Upper G), which was already in the process of being done by gradually transferring KP inmates to the nearby Millhaven Institution in Bath, Ontario.

These desolate views are rendered all the more haunting by being shot in colour (a little fewer than half of the total) with either of the two digital cameras James used for the project. (In 2012, on the occasion of his Governor General’s Award in Visual and Media Arts, James chuckled that he had recently been “reborn” as a digital photographer, after years of working with sometimes-unwieldy machines). For James’s first series in colour, 905, the artist also commented, in 2008, that the subject matter of Toronto’s suburban sprawl “is inherently vulgar and seems to demand colour.” In Inside Kingston Penitentiary, a number of colour prints highlight the incongruity of the objects framed within them—a garish children’s play structure sits out back of the family-visiting unit, and hot-pink lawn chairs adorn Exercise yard built for female inmates, but never used. Others expose the lurid quality of never-before-seen spaces of confinement, such as the nauseous green coating the walls of the Stripped down segregation cell for violent offenders.

Some colour photographs are so dark, they look black and white (at least one required special non-reflective glass for visibility), or else depict anodyne objects so drab (such as Inmate reading material) that it takes a minute to register that it is a colour photograph of something essentially colourless. One of these, Hand gouged into the wall, administrative segregation range, depicts a raised middle finger (large, judging by the tiny inscriptions of “Freddy loves Chrissy,” a swastika and something illegibly small surrounding it) that has been scraped into the wall. In this work, white paint exposes another shade of white plaster, and an impossibly soft mottled grey limestone beneath; a palimpsest that emblematizes the sedimented history of the whole place.

A number of other scrawled profanities are treated—perhaps with a mixture of solemnity and resigned humour—in black and white, while a substantial collection of inmates’ drawings, murals and other cell decorations—themselves constituting a definite thematic focus—are shown to full effect in colour, their vibrant swathes making the 2.3 metresquare prison cells somehow closer and more involuted. The subjects of the drawings are often religion, the politics of territory and First Nations identity, and fan culture (hockey, Harleys and pin-ups figure prominently). Where Walter Benjamin, according to architectural historian Charles Rice, saw the interiors of our living spaces as impressionable surfaces “activated through the inhabitant’s relation to the city and its world of publicness,” enabling a bourgeois “subjectivity and social identity,” the inmates’ impulse to throw up the contents of their minds onto the surface of their walls seems to be both a mnemonic device—a way to remember themselves—and a way to pass the time. No wonder the terminally bored choose drawing, whose tools are immediate and whose lines record the history of their own making.

Like the book, a format James values as being to the photograph what the paragraph is to the sentence, the exhibition includes some inscriptions from inmates and corrections administration. Vinyl wall texts placed sporadically between the artworks suggest a stilted dialogue between the inmates’ angst-ridden poems, missives and aphorisms and terse regulatory statements that aim to control these feelings.

Setting his gaze upon the resourcefulness of inmates who manage to save and scavenge materials for customizing their accommodations, James trains the viewer’s attention on two concepts he has long favoured in his work: things that remain where they shouldn’t be, and things that are normally ignored as part of the background. Searching these heterotopic caches, one wonders what features represent small indulgences, what was merely caught in a state of disrepair before being restored to order and why that which was allowed was allowable and that which was prohibited had to be prohibited.

The claustrophobic spaces in the current series are a far cry from the panoramic shots that defined James’s work on European formal gardens in the 1980s, and to which he returned for his book on Toronto in the 2000s. There is also a dizzying contrast between the ground-level interiors and some of the aerial and outdoor shots in Inside Kingston Penitentiary. Tower 4, for instance, leads the eye down a snaking path past a guard tower and out to Lake Ontario, conveying an immense sense of space that only collapses a little when you look at the tower door and a nearby fire hydrant for scale. Some of James’s empty spaces in particular look as though they couldn’t possibly be coeval with the plastic of children’s play structures or lawn chairs. In other images, monochrome works to camouflage contemporary surfaces—the rough plastic tops of folding tables, the vinyl edges and coarse nylon of heavy-duty entryway mats—into scenes that could pass as historical.

James is never one to shy away from beauty, no matter how unfashionable, and his black-and-white shots of the prison’s architectural features are exquisitely framed. Some evoke geometrical abstraction, replete with patterns and frames within frames. These features tend to cooperate with each other in the form of doors and windows whose apertures are subdivided by the bars that narrow down space into manageable view holes and benign vents. Conversely, Unfinished outer wall shows a jutting partial limestone barrier, reminiscent of James’s Settlement along the Fence, Tijuana (1997), where, in curator and critic Johanna Mizgala’s analysis, “James exposes for all to see that the fence [erected by the Americans along the California/Mexico border] actually comes to an abrupt end, ultimately throwing its very purpose into sharp, sardonic irony.” A reminder, perhaps, that our containers are imperfect ones whose integrity depends as much on our ideas about justice, safety and rehabilitation as on the materials of their physical construction.

For all the unyielding angles and stark linearity of the prison structures, there is a softness to James’s pictures, seeming to emanate in this series from the ubiquitous limestone, which, as James relays in his catalogue essay, “was quarried and dressed by inmates and, over the years, has lightened to a delicate dove grey.” There is something even painterly in the soft edges of the darkest night shots. Given the palpable tension in these images—exemplified by the startling violence implied in the title of the photograph Book drop-off in the Dome, with absorption pad for warning shots—their compressed tonal range reads like an aesthetic gesture of restraint, as though the even pressure of an insistent quietude represents the best shot at keeping things in check.

While his work often deals with social issues, James has said in no uncertain terms that it is not political, and countering any assumptions about his origins as a journalist, that he is “in a way…anti-journalistic.” Perhaps, then, the marked attention paid to the Aboriginal change of seasons ceremony in eight of his photographs, and his “Prison Notes” description of them as “a ray of light in a bleak landscape,” is most indicative of his own grappling with the penitentiary’s oppressive atmosphere. In his acknowledgements, James thanks those who made the experience easier on him, saying plainly: “maximum security prisons are not good places to be.” At the same time, any focus on the resilience offered by the traditional community also cannot help but comment on the disproportionate incarceration of First Nations people. And certainly James’s commentary to media covering Inside Kingston Penitentiary has verged on the political more so than with previous projects. As he told the Walrus: “Inmates are human beings with human aspirations. And most of them are going to be released. You reap what you sow. If you treat people like nothing, you’re going to get nothing back.”

Scanning through 109 photographs shown in thumbnail at the end of the book, titles like Teacher talking to student, Upper G read like bare administrative entries of the same kind as those depicted in In front of the white board, with the location of every inmate. But it doesn’t take long to realize that in the panopticon, there is scarcely anything more powerful than the precise location of its charges, nor anything more evocative than the names of its various purpose-built domains. Administrative segregation cells, for example, names the isolated reach where the most dangerous offenders are confined for all but one hour every day, which is often spent alone in a small exercise yard where the sky can just be glimpsed above four high walls and a mesh ceiling.

It is disorienting to think of something being so remote and yet so enclosed and available to scrutiny. And so it is that the project Inside Kingston Penitentiary shifts our perspective. With abrupt juxtapositions of the ludic, the violent, the contemplative and the bureaucratic, it offers us a portal into the intriguing histories of the penitentiary and the strangeness of its prison culture being located in the midst of Kingston’s municipal life, but walled off from it.

This is a feature article from the Winter 2015 issue of Canadian Art. To read more from this issue, visit its table of contents. To read the entire issue, pick up a copy on newsstands or the App Store until March 14, 2015.